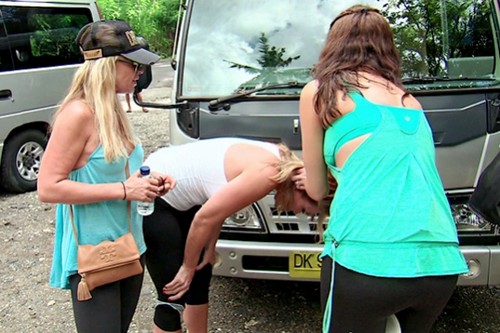 The Real Housewives of Orange County returns to Bravo tonight. On tonight’s episode called, “Bali Highs and Lows,” Balinese bliss becomes a rumble in the jungle when the ladies set out on a trip to Bali. Heather and Shannon hope for peace and relaxation, but things escalate when Shannon gets some shocking news.

On the last episode Heather and Tamra decided to take a girls trip to Bali, but they struggled with whether they should extend an olive branch to Shannon. Meanwhile, Lizzie had one of the worst birthdays ever. Later, love was in the air when Heather threw a spectacular Valentine’s Day dinner party with sexy games and shenanigans. Did you watch last week’s episode? If you missed it we have a full and detailed recap, right here for you.

On tonight’s episode Balinese bliss becomes a rumble in the jungle when the ladies set out on a trip to Bali. Heather and Shannon hope for peace and relaxation, but things escalate when Shannon gets some shocking news. Meanwhile, Vicki hears about a scandalous statement allegedly made at the Valentine’s Day dinner and Lizzie reveals her true thoughts about Tamra.

Let the drama begin! Tonight’s episode of RHOC begins the ladies trip to Bali. Since they have done nothing but fight over the drama in Shannon’s life they figure taking a 23 hour flight together and then being forced to spend time together will cure everything. The flight seems to go just fine and by the time the ladies touch down it looks like they are half in tropical paradise and half in Tijuana. Heather sums it up best by saying that you can certainly tell that you have landed “somewhere else”.

The whole crew survives their first dinner and the next day they venture out to have some fun. Vicki decides to kayak with a half blitzed Shannon. Of course they both end up in the water. Meanwhile Lizzie, Tamra and Heather are lounging and discussing all things Shannon. Lizzie also brings up being grateful that Vicki showed up for her birthday party. She also heard Vicki refer to her as “dumb and dumber” but was trying to shake it all off.

Vicki apparently drank way too much because as she gets into the van she starts dry heaving and vomiting. They ladies are attempting to drive to see elephants and Vicki is sick all the way there. They finally all arrive for elephant rides and while Lizzie and Shannon share a ride they discuss the infamous birthday that Tamra blew off.

[10:00:42 PM] Cate Meighan: The ladies go to dinner and they are are melting in the Bali heat. That doesn’t stop them from wearing full make up. They make it 24 hours before the first blow out and of course it is about Lizzie’s birthday.  She confronts Vicki over calling her dumb and dumber. Then Lizzie and Tamra go rounds because Tamra was a no show for her birthday. Eventually Lizzie declares herself over it all. That’s not quite true and after Tamra, Heather and Vicki leave the table Lizzie bawls her eyes out.

One bone of contention is the petty fact that Tamra made fun of Lizzie’s dress. This season Tamra really seems to have a selective memory and doesn’t know what she actually does. She denies making fun of the dress until Heather calls her out.

Lizzie also lets it drop to Shannon that Tamra has told everyone in the group about David’s break up email. Shannon is stunned though I’m not sure why. Vicki warned Shannon not to trust Tamra and she just keeps proving that she really isn’t to be trusted. Lizzie starts running her mouth and tells Shannon  every bad thing that Shannon has ever said about her. Meanwhile Tamra and Vicki are chilling together  bad mouthing Lizzie. It’s funny because both ladies are telling the same story but it’s completely different. The way this season has gone it’s usually Tamra that is lying. Tune in next week for more RHOC.