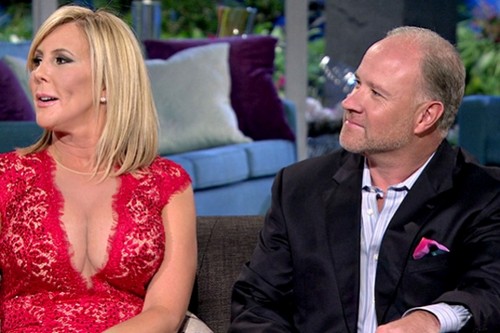 The Real Housewives of Orange County returns to Bravo tonight. On tonight’s episode called, “Secrets Revealed,” secrets are revealed with never-before-seen footage from Season 9 including a playful painting party, a raucous rock climbing session and a dirty duck dinner in Bali.

On the last episode there were laughs, tears and tirades in part two of the reunion as Shannon explained her holistic ways as only Shannon could do. The ladies argued over whether Lizzie was more drama queen than beauty queen, and the gloves were off when Tamra faced her accusers on whether or not she’s to blame for much of this season’s conflicts. Did you watch last week’s episode? If you missed it we have a full and detailed recap, right here for you.

On tonight’s episode secrets are revealed with never-before-seen footage from Season 9 including a playful painting party, a raucous rock climbing session and a dirty duck dinner in Bali. Vicki and her beau Brooks also attend a therapy session and Tamra takes baby Astro out on the town. Plus, more is revealed from the Reunion.

RECAP: Tonight’s Real Housewives of Orange County reunion begins with a reel of bloopers from some of the funniest moments of the season. After the reel the housewives join Andy on stage and they discuss the hilarious scenes of them getting fish pedicures. Andy thinks Shannon and Vicki’s drunken paddle boat scene was especially funny. Vicki seen an abandoned boat in the water, and they paddle over to it, and Vicki tries to climb aboard but they end up flipping their kayak.

Up next they take a look at a never before seen clip of a painting party at Tamra’s house with Heather and Vicki. When Vicki arrives, she realizes what exactly a “Painting Party” is and argues that she didn’t work all day and come over to Tamra’s house to paint it for her. There is a knock at the door, and Heather says “oh that’s for me.” She lets a man in named Zack, and announces he has come to paint for her, because she “doesn’t paint.” The painter gets to work, Vicki, Shannen, and Heather all watch him from across the room. The fire alarm goes off while they are fantasizing about the stripper/painter and Tamra’s home-made pizza is burnt black.

Andy shares a clip of Shannon next, she had her Fung Shui consultant Elaine over to her house, because she needs help spicing up her marriage with her husband David. Elaine sits down with her an gives her crystals to hang in her relationship corner of her house, she says the crystals will keep their energy flow moving. She instructs Shannon to go to a fabric store and get two pieces of red fabric, she needs to come home and sew them together and while she is sewing she needs to visualize a successful marriage and imagine she is sewing herself to her husband David.

Next Andi brings up Vicki and Lizzie’s bumpy new friendship, Vicki made fun of her big boobs, and her beauty queen pageants. The housewives all agree that it takes Vicki awhile to warm up to new people, but she had no problem warming up to Shannon. Tamra feels left out because ever since Shannon came along, Vicki has been having fun with her instead of Tamra.

Up next is a clip of Tamra, Eddie, and their robot baby out to dinner. Tamra killed her robot baby twice while they were taking care of him because he was up crying in the middle of the night and she “needed her beauty sleep.” When Tamra and Eddie went out to dinner, their robot baby screamed the entire time and Tamra was embarrassed of him.

Andy asks Tamra about her feud with Vicki over her boyfriend Brooks, Tamra argues that she knew that Vicki could do better. Andy brings Brooks out on stage so that they can hash out their disagreement. Andy addresses the rumors about Vicki dating other people and the rumors going around the internet, Vicki admits that she has dated other people and Brooks is well aware of it. But, none of the men hold a candle to Brooks, so she is still with him. Brooks explains that it has been a tough year for both of them, they have been to individual therapy and couples therapy, and he is still a part of her life. Andy shares a never before seen clip of Vicki and Brooks at therapy, Brooks confesses to the therapist that he told her daughter BreAnna that he was going to “beat her ass” one night when he was drunk. And, BreAnna has never forgiven him for that, even though it was two years ago. Vicki is conflicted because she doesn’t want to lose her daughter or Brooks.

Terry and Heather Dubrow have had some bumps in the road in their relationship as well, but Heather is confident that they have “found themselves again.” Andy shares a clip of Heather and Terry’s anniversary of their first date dinner and Heather surprises Terry with a scrap book of all of their memories together. Terry gushes that he loves his gift, and feels guilty because he doesn’t have on for her, so he tries to recite a poem to her.

The Real Housewives of Orange County reunion comes to a close with a hilarious clip of the housewives in Bali at an awkward restaurant. While they are ordering food Heather accidentally sprays her mouth and eye with bug spray, she jokes that she is blind and they need to call Terry.