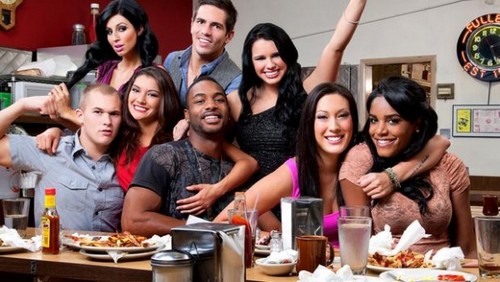 Tonight on MTV THE REAL WORLD EX-PLOSION continues with a new episode called, “The Test.”  On tonight’s episode Arielle reveals a secret; Brian gets into trouble; and Cory’s ex finds out she’s pregnant.  Did you watch last week’s episode?  We did and we recapped it right here for you.

On last episode Thomas got stuck in a love triangle between Jamie and his ex-girlfriend, Hailey, while Jennys wild behavior upset Brian. A major shockwave hit when one of the roommates discovers that she is pregnant.

On tonight’s episode the producer offers her support to help Lauren decide whether she should leave the house.  Arielle reveals a secret; Brian gets into trouble; and Cory’s ex finds out she’s pregnant.

Tonight’s episode is going to be another drama packed one, which you won’t want to miss. So be sure to tune in for our live coverage of MTV’s The Real World Ex-Plosion Season 29 episode 6– tonight at 10PM EST!  While you wait for our recap, hit the comments and let us know how excited you are about the new season of the Real World Ex-plosion tonight.

Tonight’s episode begins with an answer to a question some of us had. Why was anyone thinking Cory could be the father of Lauren’s baby? They only had sex two days prior, so that would never show up on a pregnancy test so soon afterward. When Cory and Lauren continue to talk, Lauren confesses that she has been with someone back home, but that they used a condom. Cory tells her that it has to be the other guy’s baby because it could not possibly be his. He is really upset and seems to feel like Lauren may not be telling the truth about using protection.

Doug, a guy from a previous episode who tried to hook up with Jenny, is back…with flowers in hand for a surprise visit to see Jenny. She answers the door and he comes in and asks her to dinner. He seems very, very uncomfortable when she shares her ex is in the house. Despite this, he still comes into the house where the others are hanging out, and seems even more uncomfortable. The only word to describe the encounter between Jenny and Doug is AWKWARD. Finally she suggests he leave and he finally takes the hint.

Cory shares with Thomas that Lauren is trying to tell him the baby is his because they did not use protection, but she did with the other guy. Sorry, honey, you won’t get this over on him. Pregnancy tests don’t show a positive after two days even if you were preggers. Lauren begs Cory to forgive her and be there for her but he says he cannot. He leaves her alone in the room. Cory keeps berating Lauren for putting herself in this situation. She requests a meeting with the producer to discuss her fate on the show. She is strongly considering leaving. Cory is hurt and distancing himself. Lauren is feeling so bad that she decides to go home. Lauren fesses up that she did not use a condom with the other guy but says she used Plan-B the next day. He gets really upset that she lied to him. She brings up that he has lied to her many times and he tells her to stop talking about the past. She says she cannot forget the past…and that may have been the last nail in the coffin because Cory knows they could never move forward with her if she cannot let go of the past.

Lauren makes the stupid decision (yes, another one) to go to the club with everyone that night. While there she tries to get Cory to dance with her but he is barely speaking to her. He ends up meeting someone and flirting right in front of Lauren and she goes nuts. She runs out after confronting Cory and pushes him out the way. He does not even make an attempt to follow her. He is REALLY done. He stays and keeps talking to the girl he just met. Jenny tries to comfort her back at the house and the girls talk about the double standard. Cory calls his grandmother but is too broken up to speak to her.

The next night Brian and Jenny are heading out to dinner to celebrate their five year anniversary. They seems to be getting along well and head back home and make brownies together…something that rekindles the love and old times they’ve shared.

Cory offers to take Lauren to dinner to be a friend. He tells her that he was ready to take this to the next level but this messes everything up. He reminds her as well that because she cannot forget the past-they’d never have a future anyway. Their story, for now, seems to end as Cory takes Lauren to the airport to go back home.