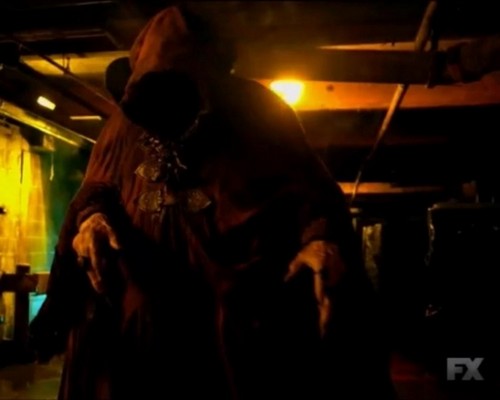 Tonight on FX their highly anticipated new vampire drama, THE STRAIN airs with the second episode of season 1 called, “The Box.” On tonight’s show strange symptoms begin to show in the four survivors. Meanwhile, Setrakian gets a surprise visitor.

On the last episode when a plane landed in New York City with everyone on board dead, Dr. Ephraim Goodweather, head of the CDC’s Canary Project, and his team were called upon to investigate. Harlem pawnbroker Abraham Setrakian races to the airport, convinced that what looked at first like a mysterious viral outbreak might have been the beginning of something infinitely more sinister. Did you watch the last episode?   If you missed it we have a full and detailed recap, right here for you.

On tonight’s episode the four survivors begin manifesting strange symptoms, but Eph and Nora’s attempt to quarantine them is thwarted as the disinformation campaign begins. Meanwhile, in jail, Setrakian receives a surprise visit from an old – a very old – acquaintance. Written by David Weddle & Bradley Thompson; directed by David Semel.

This new series looks like it going to be great and you won’t want to miss it. So be sure to tune in for our live coverage of FX’s The Stain season 1 episode 2 tonight at 10PM EST! While you wait for our recap check out the sneak peek video below of tonight’s episode!

Tonight’s episode of The Strain begins with the police investigating the murder of Peter Bishop, they arrive on the scene and the victims head has been crushed. While they are investigating the crime scene Ephraim receives a phone call that the four survivors are being released by the hospital. Ephraim rushes to the hospital, and tells them they are under quarantine and under no circumstances can leave the hospital.

Abraham’s lawyer arrives at the prison to see him, and he is shocked when he heads to the visitor station and comes face to face with Thomas Eichorst. He mocks Abraham and asks him if he still believes in his God and asks him about the antique sword that was mentioned in his police report. Eichorst brags about killing a woman who apparently meant a lot to Abraham back in the day. Abraham reminds him that he killed his partner with his sword, and he will make sure that he kills Eichorst as well.

Gus returns home, and his brother is watching the news about the airplane “with the stiffs on it.” His mother interrupts their arguing and invites Gus to come to mass with her, he turns her down. She shows Gus an old clock that his brother bought for her, he says he got it at a flea market. After their mom leaves, Gus freaks out on his brother and asks him where he got the clock. He tells him not to “bring stolen shit in to their house.”

At the JFk Airport, Ephraim and Nora meet with Margaret Pearsons, the head of Health and Human Services. She informs them the plane is not a CDC case anymore, and the passengers died of a faulty air system. Ephraim argues with her that the patients clearly died of a venereal disease. Pearsons doesn’t want to hear it, if they put NY under quarantine, it will stop all imports and exports, and crash the economy. Margaret sends Ephraim and Nora home and tells them they are off the case.

Ephraim and Nora head to a bar and meet with the pilot of the plane. He says he is filling a little sick, and has a buzzing in his ears. They ask him about the crate that is missing from the plane. He says that government officials showed up at the last minute in suits and badges and put the cargo on the plane. He didn’t question it, because they seemed legit. Ephraim tells the pilot to go to the hospital and ask for Dr. Lester, and he will be able to diagnose what disease he has contracted.

Ephraim and Nora head back to their quarantined lab to run some more tests on the worm they extracted. Ephraim has learned that every time they give the worm a little bit of blood it reacts and becomes more lively. He receives a text from his son Zak and remembers he is supposed to meet up with him. Nora tells him to go, so that his ex-wife Kelly can’t use it against him later at the custody hearing.

Vasiliy Fet, a member of pest control heads in to a restaurant and inspects the kitchen. The chef tries to pay him off but he brushes his bribery off. He finds traces of rat urine underneath the cupboard, and a rat inside a cabinet. He tells the chef to shut his restaurant down, and heads out in to the dining area and show the patrons the rat he just found. They run out the door squealing, ironically the survivors of the plane are eating at the restaurant with the other guests. And they are experiencing strange symptoms like buzzing in the ears and bloody gums.

Nora and Ephraim head to the hospital where they sent the airplane pilot. They check in on him and realize his condition has worsened. After checking him with a UV light they realize his entire body is covered with tiny worms crawling under his skin. Ephraim rushes out to call Dr. Bennett at the morgue and see if he has any test results on the dead passengers. His phone rings off the hook.

Nora and Ephraim head to the morgue to see why Dr. Bennett isn’t answering their calls and the results from the bodies they sent him. En route to the morgue Ephraim receives a phone call from Gary, Emma’s father. Gary apologizes for the way he behaved and thanks him for sending Emma home. Ephraim is confused because Emma is dead, but Gary says that she showed up on his doorstep alive and well a few hours ago. Gary hangs up on Ephraim because he doesn’t believe him. Ephraim tells Nora there is no way that Emma can be alive, he thinks Gary is seeing ghosts.

Ephraim and Nora arrive at the office of the medical examiner, and the phones are ringing off the hooks. They head in to the morgue and find a room full of empty body bags, and Dr. Bennett is nowhere in sight.

Gary heads in to the bathroom to get Emma out of the bath tub. He invites her to come eat dinner and listen to the Lion King soundtrack with him. She says she is hungry and then latches on to her dad’s neck and kills him.