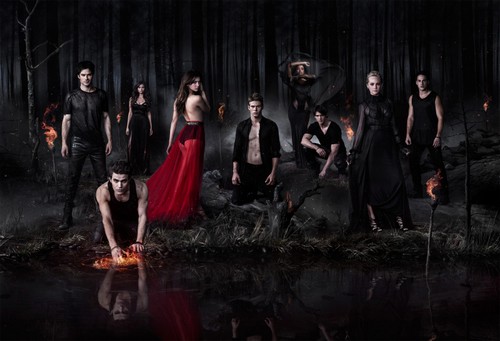 Tonight’s episode of The Vampire Diaries was all sorts of intense, and sadly we are going back on another break for a couple of weeks.  We cannot wait till the next episode and we managed to get some juicy spoilers and a sneak peek video of “No Exit” for your enjoyment below while you wait for it to air February 27th, 2014!

On tonight’s show hoping to help everyone move past recent traumatic events, Caroline convinced Elena and Bonnie to attend Whitmore College’s “Bitter Ball” for broken-hearted students. Bonnie was intrigued with a fellow student named Liv (guest star Penelope Mitchell), who appearred to be dabbling in witchcraft. Tyler started to worry about Matt’s relationship with Nadia (guest star Olga Fonda).  After making a disturbing discovery, Stefan had a frustrating conversation with Damon and Enzo (guest star Michael Malarkey). Dr. Wes (guest star Rick Cosnett) struggled to continue his research project with help from a new benefactor ,named Sloan (guest star Caitlin McHugh). Still bent on revenge, Damon and Enzo resorted to violence to convince Bonnie and Jeremy to help them, but their plan took an unexpected and horrifying turn.  Did you watch tonight’s episode?  We did and a lot more happened, check out our nifty we recap, here!

Spoiler alert: If you’re one of those people who doesn’t like spoilers, stop reading now! We have some juicy spoilers for you about the season 5 episode 14 of CW’s “The Vampires Diary.”

Official CW synopsis: “As Damon’s (Ian Somerhalder) behavior escalates from destructive to deadly, Stefan (Paul Wesley) begins to regret their last conversation and decides to track Damon down and intervene. For reasons of her own, Elena (Nina Dobrev) volunteers to come along. Dr. Wes (guest star Rick Cosnett) enlists the Travelers to set a trap that will once again test Damon’s friendship with Enzo (guest star Michael Malarkey). After a heart-to-heart talk with Nadia (guest star Olga Fonda), Matt (Zach Roerig) enlists Caroline (Candice Accola) and Tyler’s (Michael Trevino) help to protect Elena, leading to a violent confrontation. Later, when Stefan tries to comfort a dejected Caroline, their conversation leads to a horrifying realization. Michael Allowitz directed the episode written by Brian Young (#514)”

The Vampire Diaries Season 5, Episode 14 “No Exit” airs on the CW on February 27th, 2014. Check out the preview video & some photos from episode 14 and let us know in the comments below what you think!