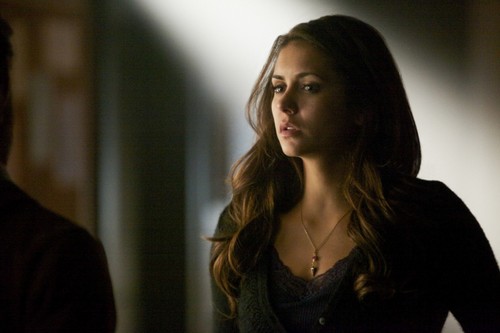 Tonight’s episode of The Vampire Diaries was all sorts of intense,  the gang was successful and Elena is back.  But a twist, she’s a super-duper ripper now – worse than Damon, yikes!  We cannot wait till the next episode and we managed to get some juicy spoilers and a sneak peek video of “While You Were Sleeping” for your enjoyment below while you wait for it to air March 20th, 2014!

On tonight’s show while Nadia remembered her centuries-long search for her mother, Stefan, Caroline and Matt came up with a desperate new plan to save Elena’s life. For the second time, Bonnie and Jeremy had to turn to Liv for help. Damon baited Tyler into a nasty confrontation, then took off to seek revenge on Dr. Wes. Caroline and Tyler came to a new understanding. Finally, Bonnie learned of a terrifying secret that threatened the lives of all her friends. More happened!  Did you watch tonight’s episode?  We did and a lot more happened, check out our nifty we recap, here!

Spoiler alert: If you’re one of those people who doesn’t like spoilers, stop reading now! We have some juicy spoilers for you about the season 5 episode 16 of CW’s “The Vampires Diary.”

Official CW synopsis: The CW has decided not to release a synopsis yet of the episode, perhaps because they are taking a break for 2 weeks.  Or maybe something explosive is going to happen and they don’t want to let the cat out of the bag.

On the next episode we know we will be meeting some new characters firstly a new gay vampire called Luke who will be played by Chris Brochu is going to air on the episode.  He is going to be a bit shady and has info on the witches and travellers.  Secondly, from the photos we see (check below) new character Sloan is doing something that doesn’t look fun to Stefan while Caroline looks on.  Odd photo, because Caroline doesn’t seem concerned at all.  We also know Elena is back in her body and she is going to have a mess on her hands to fix up.  She will have to undo all the damage that Katherine caused.  Hence the title, “While you were sleeping.”

The Vampire Diaries Season 5, Episode 16 “While You Were Sleeping airs on the CW on March 20th, 2014. Check out the preview video & some photos from episode 16 and let us know in the comments below what you think!