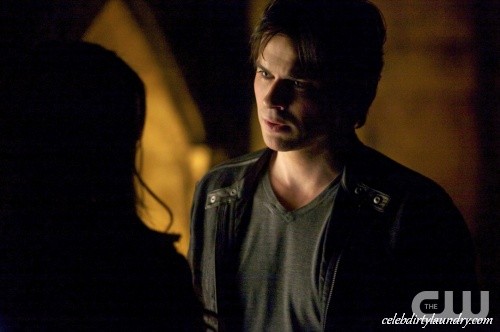 The Vampire Diaries season 5 has turned out to be a thrill ride, as always. On the most recent episode, Stefan and Elena escaped from Markos’ control, only to find themselves stranded in a remote location, Stefan got philosophical with Elena about her relationship with Damon. After their attempt to protect the dopplegangers went badly, Liv and Luke came up with a dangerous new strategy.  If you missed TVD season 5 episode 21 “Promised Land,” then be sure to CLICK HERE to get your full recap!

Spoiler alert: So what can we expect on next week’s episode? Let’s find out! If you’re one of those people who doesn’t like spoilers, then stop reading now! Because we have some juicy spoilers for you about episode 22 of CW’s The Vampires Diaries.

Official CW Synopsis: Heartbroken by an unexpected tragedy, Damon (Ian Somerhalder) will be focused on holding himself together, while pushing Bonnie (Kat Graham) harder than ever to find a way to stop the disintegration of the Other Side. Elena (Nina Dobrev) will take matters into her own hands ,and demands that Liv (guest star Penelope Mithcell) and Luke (guest star Chris Broshu) help her, but Liv will refuse to cooperate until Caroline (Candice Accola) provides her with some personal motivation.

Sheriff Forbes (guest star Marguerite MacIntyre) will be horrified when Markos (guest star Raffi Barsoumian) uses violence against Tyler/Julian (Michael Trevino) to prove that Mystic Falls is now under the control of the Travelers. With new information from Sheriff Forbes, Damon is going to come up with a dangerous plan that will rely on split-second timing from Jeremy (Steven R. McQueen) and Matt (Zach Roerig).

Liv’s off-hand remark regarding Stefan (Paul Wesley), will get a surprisingly emotional response from Caroline. As conditions on the Other Side worsen, Bonnie will take the opportunity to settle an old score. Finally, Damon’s plan will cause a massive explosion in Mystic Falls, and everyone is going to get caught up in the confusion, leaving a trail of heroism, sacrifice, relief ,and despair.

Make sure to check out the video of next week’s episode below. We can’t wait for it! The Vampire Diaries Season 5 Episode 22 “Home” airs on the CW on May 15th, 2014. Let us know in the comments section below how you think this season’s going to end! Do you think we’ll be losing any major characters — like perhaps the two witchy blond wonder duo, who clearly have it out for Elena and Stefan?