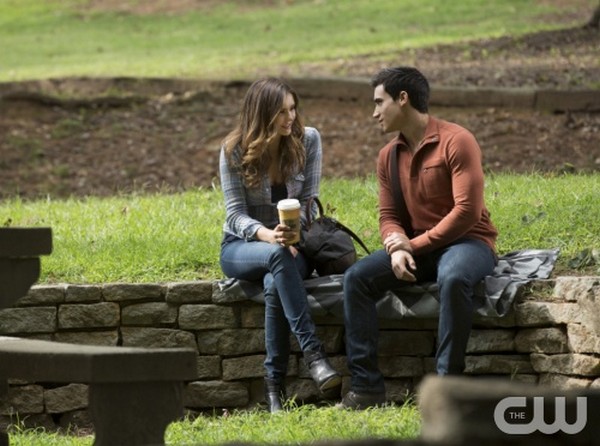 The Vampire Diaries spoilers for Season 6 episode 7 promises some great action and intrigue on next week’s show. Tonight’s on CW my favorite series, The Vampire Diaries aired episode 6 and it was all sorts of intense, Damon’s back but Elena won’t see him then he’s captured by vampire hunter Tripp. Will he die again without seeing the woman he loves?

We cannot wait till the next episode. Good news, we managed to get some juicy spoilers and a sneak peek video of “Do You Remember the First Time?”  for your enjoyment below while you wait for it to air November 13th, 2014!

On tonight’s episode when Alaric realized that Jo could not be compelled, he askd Elena to do some digging into her background. After learning that Enzo had been captured by Tripp, Caroline teamed up with Matt and Stefan to rescue him before Tripp learned their true identities. Armed with some new information about her past, Sarah broke into Tripp’s office and was surprised when she found Matt there, doing some investigating of his own. Meanwhile, Elena was forced to deal with the consequences of her actions, and Jeremy hit rock bottom, lashing out in a destructive way. Lastly, Damon was determined to take matters into his own hands when he received some upsetting news.  Did you watch tonight’s episode?  We did and a lot more happened, check out our nifty recap, here!

Spoiler alert: If you’re one of those people who doesn’t like spoilers, stop reading now! We have some juicy spoilers for you about the season  6 episode 7 of CW’s “The Vampires Diary.”

The Vampire Diaries Season 6, Episode 7 “Do You Remember the First Time?” airs on the CW on November 13th, 2014. Check out the preview video & some photos from episode 6 and let us know in the comments below what you think!