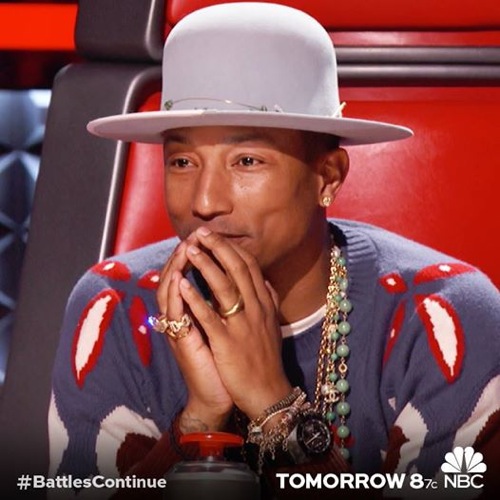 On the last episode, in the “battle rounds” part 2, we saw more contestants face off against each other to get a spot on their coach’s team. Did you watch the last episode? If you missed it, we have a full and detailed recap right here for you.

On tonight’s episode the “battle rounds” continue – the coaches enlist fellow musicians; Adam Levine teams up with Stevie Nicks, Blake Shelton with Little Big Town, Pharrell Williams with Alicia Keys and Gwen Stefani with husband Gavin Rossdale. In this phase, the coaches pit two of their own team members against each other in a dueling duet. After the vocal face-off, each coach must choose which artist from their team is the strongest, and has the option of stealing losing artists from an opposing coach. Each coach has two steals during the battle rounds where their artists will proceed to the new knockout rounds.

Tonight’s season 7 episode 9 is going to be exciting. We’ll be blogging it right here for you. In the meantime hit up the comments section and tell us your thoughts on season 7 of The Voice and the two new judges, Pharrell Williams and Gwen Stefani.

First up tonight is team Adam’s Damien and Kelli Douglas; we get a recap of the two and what they did in the blind auditions to land a spot on Adam’s team this season. Damien was really amazed to meet Stevie Nicks with Adam, it was truly an honor for him. Damien believes the biggest challenge is the performance, he feels like that will really show off the artist he wants to be. Stevie knows Kelli has good timing, but she is worrying too much and it’s making her slip up. At the last rehearsal Kelli is struggling and kind of losing her place, Stevie thinks she has to listen to R&B music more and just have much more fun with it. Stevie knows they have a lot of potential, she really wants them to both go through. The two are singing, “Knock on Wood”.

Blake says this will come down to taste for Adam, because Damien has an explosive voice which can do so much; though Kelli has a smooth and warm voice that is very soft. Pharrell says it’s tough, Damien sings so effortlessly and Kelli has a very smooth tone. Gwen says she was so distracted by Kelli’s body, she looks so beautiful; though didn’t feel it was the perfect song for her because Damien over powered it. Adam says that they worked really hard, though Damien’s explosion happened and it was great; he also loved Kelli’s voice. Adam decides the winner of this battle is Damien.

Kelli tells Adam she is so thankful for everything he has taught her, she has learned a lot in this time; Gwen would have stole her but only had one left so she felt it wasn’t right to let it go just now.

Next up is team Gwen’s Jesse Pitts and Ryan Sill, we now get a little recap of what these two artists did to get to the point they are now with their incredible performances in the blind auditions. Gwen paired them together because they have similar pop sensibility, though feels they have good voices that pair well; they will be singing “I Need Your Love”. Gavin feels like Jessi’s voice really pulls you in, Gwen loved them together and it made her get a tear in her eyes. At the last rehearsal Gavin feels Jessi has to be a bit louder, Ryan is very willing to learn how to perform better on stage.

Blake says that Ryan’s voice has the pocket which cuts like a razor with a perfect pitch, though loves Jessi’s unique voice and would vote for her. Pharrell, loved how dramatic their performance was; though Jessi has that fluffy powdery voice but Ryan did really well. Adam was amazed with both of them and loves how they really worked well together. Gwen loves them both so much and this is really hard for her to decide; the winner of the battle is Ryan. Jessi thanks Gwen for being so nice and kind to her; she thanks her for all that she has learned. Blake decides to steal Jessi; Jessi starts crying and Blake says he’ll do all he can to help her and her unique voice.

Next up is team Pharrell’s Blessing Offor and Katriz Trinidad, we get a little recap of the history of these two artists and the performances they did in the blind auditions which really caught Pharrell’s attention. Blessing could tell who Alicia Keys was from her voice alone, he was really excited. Pharrell loves how these two sing from the heart and knew they’d be perfect together, he gave them the song”Do I Do” by Stevie Wonder. Pharrell knows Katriz is a good singer, but she has to let loose more; though wants Blessing to sing with more aggression. Pharrell is happy to have them both on his team, they’re both amazing. Alicia knows Blessing is comfortable with this, though Katriz is struggling a little bit with it quite a bit. At the last rehearsal; Pharrell tells Blessing to really hit the last note perfectly. Though Alicia wants Katriz to command the stage without a mic stand, Blessing believes it’s hard since he can’t move around much with being blind and hopes he can win it with his voice.

Gwen says that Katriz is so small but has an insanely bold and powerful voice, though Blessing’s tone is so rich and effortless. Adam says that it was a lot of fun and loved it. Blake says that Pharrell giving them that song was a surprise and believes it was very tied. Pharrell says that he sent them back with notes and they did rise to the occasion; they both did well but decides he’s going to go with Katriz since she has a beautiful voice and tons of training. Blessing thanks Pharrell for such an amazing experience, though Adam steals him right way saying he felt that he killed it. Though Gwen goes ahead to steal Blessing as well, Gwen loves his voice and being around a talented person like him will inspire him; Adam says he knows exactly what Blessing wants and can help him. Blessing decides he’s going to join team Adam.

Next up is team Adam’s Ethan Butler and Matt McAndrew, we get a little look at what these two men did in their blind auditions to lead up to the moment of their life right now. They are singing “Yellow” by Coldplay, Adam loves the song with a passion; Matt and Ethan are both big fans of the song as well. Stevie loves Ethan’s beautiful choir voice, though Matt has a compassionate voice that could make you cry. Adam really likes them and feels they are going to kill this, Stevie believes they are the dream team. At the last rehearsal they came in with their own version of the song, Adam is so impressed with how much they are working on making the song their own.

Blake says that was a great job and has no idea when they last saw two artists get so lost in the song, he believes they could be a legit duo. Pharrell says that the way Matt sang the song was amazing, but Ethan surprised him so much. Gwen loved it and felt it was more suited for Matt, though Ethan really went for it and actually did just as good. Adam is so happy with them, he loved how they went for the notes in their own ways and it worked, the there is something what Matt does is so unique; though Ethan is seriously a talented and soulful singer. Adam decides that Matt is the winner of the battle.

Ethan feels like this experience has made him fall in love with music again and is glad to have had this opportunity.

Next up is team Blake’s Bre Fondacaro and Taylor Brashears, we get a recap of these two women and what they did in the blind auditions to capture Blake’s heart. The girls were so amazed to see Little Big Town there as their coaches. Blake gave the girls the song “You’re No Good”, Blake wants this song so they can give a lot attitude. At the last rehearsal the girls are really killing it and Blake is loving it, he regrets having paired them up together; he has no idea who he will pick at the end of their battle.

Pharrell would have loved to see Bree to lose herself more into it, thought she is a very good singer; he say he hismelf isn’t the best singer but has so much fun singing. Though Taylor is his pick because she is so confident. Gwen loved the song so much and wished they both stuck to the original melody and it distracted her a lot. Adam says performance wise Taylor was much more believeable, she had more confidence. Blake says he is proud of them both, Bree has great lower register; though Taylor’s high register and power is strong. Blake believes the winner of the battle is Taylor.

Next up is team Pharrell’s Danica Shirey and Toia Jones, these women had very passionate blind auditions that really caught Pharrell’s attention. The women were very amazed to meet Alicia Keys and to get her to coach them. They will be singing “Halo” by Beyonce, Pharrell paired them up because they have similar tones and can relate to the lyrics very well. Both girls think of their fathers as they sing this song. At the final rehearsal the girls do a good job, Pharrell says it was like background singer, he wants them to bring out their emotions out a lot more; he knows they can without a doubt be the stars they want to be.

Gwen says it was crazy, both their voices are so beautiful and powerful. Adam says that doing a Beyonce song is lke killing a dragon, they pretty much killed it and then slapped it in the face; they did the song perfectly. Blake says that the performance was on 10 the whole time, though Denica showed of a softer edge, though Toia came out of nowhere. Pharrell is proud of them and how convincing they were singing that song; the winner of the battle is Denica.

Adam goes to steal Toia right away and Gwen hits her button right away right after Adam was sure he had her. Gwen says she was on a whole different level and wanted her; Toia decides she’s going to join team Adam.