BY William Blesch on October 15, 2014 | Comments: one comment
Related : Recap, Television, The Voice 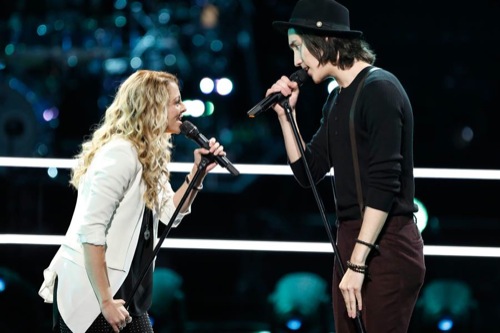 Tonight on NBC the Emmy award winning music competition The Voice continues with an all new Tuesday October 7, season 7 episode 8 called, “The Battles Round 1, Part 2.” On tonight episode, the battle round continues. The star advisers are Stevie Nicks, Little Big Town, Alicia Keys and Gavin Rossdale.

On the last episode the “battle rounds” began and the coaches enlisted the help of the music industry’s top recording artists to offer their knowledge and skills as advisers. Adam Levine teamed up with Stevie Nicks, Blake Shelton with Little Big Town, Pharrell Williams with Alicia Keys and Gwen Stefani with husband Gavin Rossdale. In this phase, the coaches pit two of their own team members against each other in a dueling duet. After the vocal face-off, each coach had to choose which artist from their team was the strongest, and had the option of stealing losing artists from an opposing coach. Each coach had two steals during the battle rounds where their artists would proceed to the new knockout rounds. Did you watch the last episode? If you missed it, we have a full and detailed recap right here for you.

On tonight’s episode the “battle rounds” continue and we see more contestants face off against each other to get a spot on their coach’s team.

Tonight’s season 7 episode 8 is going to be exciting. We’ll be blogging it right here for you. In the meantime hit up the comments section and tell us your thoughts on season 7 of The Voice and the two new judges, Pharrell Williams and Gwen Stefani.

First up is Jordy Searcy and Taylor Phelan from team Pharrell, we see a recap of both boys and what they did in the blind auditions to get them a spot on Pharrell’s team. Pharrell knows Taylor has a chance to win this, though Jordy has something very different to him that is really appealing. Pharrell knows Taylor has to step it up a lot or it will be very easy for Jordy to swoop in and win the battle, Alicia feels like they are losing the unique sound in their voices; they are just not working well as a duet. At the last rehearsal Alicia doesn’t feel it; it’s not connecting with her like they have no connection to the song. They slowed it down and it started working better; the boys are singing the song “Breakeven”.

Gwen says it was class, they are both so real and got lost in what they were doing and forgot she was judging. Adam says that Jordy did so well on the chorus and really liked Taylor’s stage presence; it’s pretty even. Blake says it’s tough, though wanted Jordy to sing out a little more; though Taylor attacks the notes really well. Pharell decides the winner of the battle is Taylor. Jordy thanks Pharrell for the opprotunity and really caring about them as artists.

First up for Team Adam is Alessandra Castronovo and Joe Kirk, they are going to sing “Stay” by Rihanna and Adam was amazed at Alessandra’s effortless way of singing; though Joe has a charismatic sound to him. At the final rehearsal there is one note that Alessandra is doing that is kind of weak, Adam can feel Joe’s nerves a bit but knows he can help him with that.

Blake says it’s a tough one, Alessandra could not have done any better though Joe has done some of the most perfect vocals he’s ever heard. Pharrell says that Joe has a career for sure, he found so much originality in it and loved Alessandra’s movement on the stage. Gwen says that she was moved and had tears in her eyes; it was so beautiful. Adam says he was impressed by how confident Joe was, he had no nerves this time around. Though Alessandra sings as if she’s not struggling at all, they both did too well. Adam decides the winner of the battle is Alessandra. Joe thanks Adam for everything, he’s very upset and doesn’t want to go. Pharrel walked him out and told him he can do it and should never give up on his dream; without a doubt Pharrell believes he’ll find success.

Next up is Menlik Zergbachew and Troy Richie, we see a recap of what both of these talented men did to land a spot on team Gwen. Gwen put them together because they both have interesting styles that could really blend well together, they are singing “She’s a Man Eater”. Menlik is trying to bring a more reggae tone to the song, though Troy really has a beautiful style that Gavin likes a lot. At the final rehearsal, they feel there is a disconnection from the two; Gavin wants to kind of blend them together.

Adam says that it’s very hard to look cool singing that song, but they really had it and made it great; he felt Menlik singed a song you’d never imagine him singing so well. Even Troy was amazing, the both of them have made the most progress on the show. Blake loves that song so much, it’s the best battle of the night without a doubt. Pharrell didn’t realize Troy was as good as he was, though Menlik did such a good job shining on that song. Gwen says she wishes she could have them both, they are without a doubt both insanely good singers. Gwen decides the winner of the battle is, Troy. Adam and Pharrell go to steal Menlik, Adam says that he has a serious voice that must be heard; he knows he’s got a strong compelling voice and wants to help him achieve all he wants. Pharrell says he loves working with artists that don’t sing as they look, he would be hurt to not have him on his team. Menlik decides he’s going to join team Pharrell.