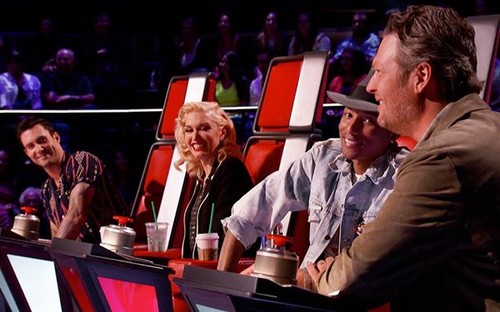 On the last episode the second part of the blind auditions took place, we saw the judges work on creating their teams for who they thought had potential of becoming “The Voice.” One of the most memorable acts last week was Joe Kirk, he’s only sang with his family so this was a big opportunity for him. Adam, Gwen, Blake and Pharrel all turned their chairs for Joe; they all loved him and Pharrel called him a beast who knew how to make the girls scream. Joe decided to pick Adam as his coach. Did you watch the episode? If you missed it, we have a full and detailed recap right here for you.

On tonight’s episode the third part of the blind auditions will be taking place, we’ll be seeing the judges work on creating their teams for who they think has potential of becoming “The Voice.”

Tonight’s season 7 episode 3 is going to be exciting. We’ll be blogging it right here for you. In the meantime hit up the comments section and tell us your thoughts on season 7 of The Voice and the two new judges, Pharrell Williams and Gwen Stefani.

The first artist of the day is John Martin, he works at a hardware store, but would love to do music full time; he went to college for music and he sadly did not graduate since his father lost his job and he decided to stay back and support them.

Blake, Pharrel and Gwen turn around for John, Blake says he’s a good looking man and he believes there is something so coo about him; he is so on board with it. Pharrel says that he took his time because he wanted to be wowed more and later on it happened. Gwen believes his voice is delicious, he’s the full package as an artist. John decides he’s going to go ahead and join team Blake, Blake gets up and is super happy.

Next up is Jessie Pitts, she comes from a big family of 8 and singing in a choir was what made her stand out; when she was 7 she got some hot water on her face and was burned for a long tme. It was painful, though she was a happy kid; she loved being on stage and when she recovered she got very confident. She has a job at a record label to help people get their music out, but she wants it to be her turn today.

Blake and Gwen turn around for Jessie, Gwen says she has a very angelic voice and had to turn right away from the first time she heard her. Blake says her voice sounds like Lucky Charms with just the marshmellows, it’s perfect. Jessie decides she’s going to join team Gwen.

Next up is Michael Stein and he is 62 years old, he has been a minister of music in the Jewish faith for several years, he loves what he does and has been helping the kids and loves making music. He was motivated to possibly get a recording contract even at this age, he feels like he can help people.

Nobody turns for Michael, Blake loved that song and would have heard him do something that had more range. Pharrel agrees, he loves the song and he’s impressed with how well he played the fiddle. Michael is just glad to have been on the show.

Next up is Ricky Manning and has 5 siblings who also love music a lot, he would sing a lot in third grade and fell in love with it; his parents got divorced early and he didn’t go to college. He moved to New Jersey and is living with his dad,he plays music in the streets or in the subway; though it’s not that easy. His dad is very supportive of him, but wants him to make money in some way.

Blake and Pharrel turn around for him, Ricky introduces himself and Pharrel says his runs were consistent every time. Blake says that he so invested in singing and can tell that music is his passion. Pharrel says he knows what to do with his voice and says that Blake is the same; he is in good hands either way. Ricky decides he’s going to join Pharrel’s team.

Next up is Kelli Douglas and she is a single mother, her son is super out going though she was very quiet and had a real fear with stage fright. She majored in corporate communication, she works with students and has been teaching for 6 years; she resigned and it made her cry. Her family is very supportive and she’s ready to make her dream come true.

Adam, Blake and Gwen turn for Kelli; Blake is so happy to know she is from texas. Adam says that he is so excited about her voice, though they do have a bit to work on as well. Gwen says she loves the rasp in her voice, yet how strong it is and knows she can help her become so much more. Kelli decides she is going to join team Adam.

Next up is Troy Ritchie, he loves to entertain people and can do some impersonations and when he was in sixth grade he got a guitar; he absolutely loved metal and wanted to shred guitars like crazy and melt peoples faces off. He’s at the voice to live his dream to become the entertain he has always wanted to be.

Gwen is the only one to turn around for him and is on his team, Adam says he didn’t expect to look the way he does. Adam loved it and felt it was interesting, Gwen loves his voice and how strong it was at the top; she went right for the button as she heard him.

Next up is Cole Wilkinson, he lives on a farm with a lot of siblings; in the sixth grade he joined a performing arts school. He loves the feeling of being on stage, music is the one thing he enjoys and wants to do it for the rest of his life; he has to not over think it and give it his best.

Nobody turns around for Cole, he basically tells them his whole family. Blake knows he’s an entertainer and was sure he was so active; Adam says that he has a great voice and wants him to come back. Gwen thinks he’s cute, Pharrel tells him to come back because he knows he has a lot to offer.

Next up is Nia Pfirrman, her parents were singers back in the past; they left that life to support their family and Nia has been going to a group for singing. She hopes it has helped her. She hopes seh can carry out her own dream and her parents.

Adam and Blake turn around for Nia, Blake says he kept looking at Adam wondering when they’d hit their buttons; there wasn’t as much finess but feels like he can really show her the ropes. Adam says the moments that were amazing were world class, though it needs work that he doesn’t feel it would have been fair to let her go home. Nia picks Adam as her coach.

Next up is Bree Fondacord, her father is a little person and she says it’s amazing to see how big their love is when she is normals sized; they’ve been married for several years. Her dad inspires her to sing and has always showed her to keep going for you dreams.

Blake is the only one to turn around for Bree and gets her on his team right away, Gwen really regrets not turning around. Adam is always a fan of different and can’t understand why he didn’t but is glad Blake has turned for her.

Tonight’s final artist is Anita Antoinette, she auditioned in the third season but got no chairs to turn for her at all; she was very disappointed about that performance and wishes she could have done a much better job. She has been battling severe stage fright for two years, she is ready to come back now; her mom has been her biggest support.

This time Anita gets all four coaches to turn for her, Adam remembers her right away and is so happy to have had her comeback; Gwen says she felt it right away and loved her voice so much. Anita says she loves music that touches people with a beautiful music, Gwen loves her so much and wants her on her team. Pharrel loves to help her touch peoples lives with music. Blake says that’s what country is all about, connecting lyrics with an artist; he believes he could help her become better. Anita decides she’s going to join Gwen’s team.