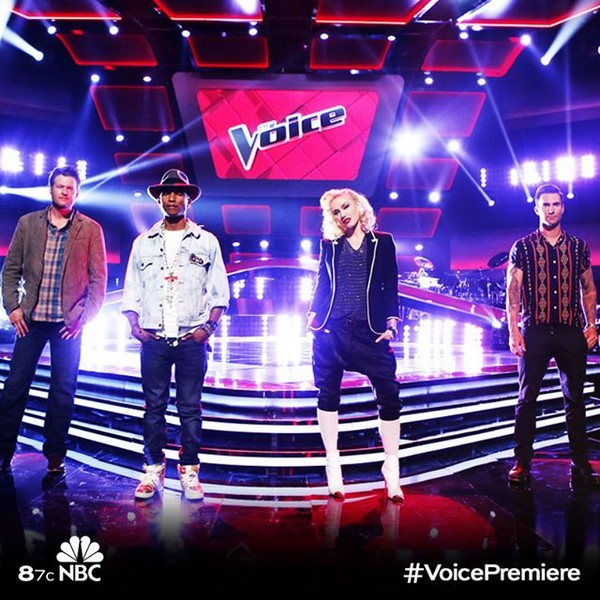 On last night’s episode it was the premiere episode and the beginning of the blind auditions, things began to get heated for the judges as the two veteran judges, Adam Levine and Blake Shelton faced off against each other and two rookie judges Pharrell Williams and Gwen Stefani. Did you watch the episode? If you missed it we have a full and detailed recap, right here for you.

On tonight’s episode the second part of the blind auditions will be taking place, we’ll be seeing the judges work on creating their teams for who they think has potential of becoming “The Voice.”

Tonight’s season 7 episode 2 is going to be exciting. We’ll be blogging it right here for you. In the meantime hit up the comments section and tell us your thoughts on season 7 of The Voice and the two new judges, Pharrell Williams and Gwen Stefani.

The first artist tonight is Danic Shirey and she loves singing R&B and Soul music; she sang on the Apollo one time when she was 15. She recorded a five song demo and since then it has been very hard, she was a daddy girl growing up and he always helped her feel comfortable with singing. He passed away from cancer, she stopped performing after his death and is now deciding to go back at it; she wants to provide a better life for her daughter.

Adam, Pharrel and Gwen all turn around for Danic; Adam says that the audience were probably super shocked like they were when she started singing. He says that he has been doing this a long time and she has one of the best voices he’s heard in a long time. Pharrel loves her technique, she knew exactly how to control the notes perfectly; he begs her to please be on his team. Danic decides she wants to join team Pharrel.

Next up is Joe Kirk and he moved to Mertle Beach with his mom since she got a job offer to sing at a resort, he sang a lot with his mom on stage at times and grew a passion for music. He wants to make his mother and brothers proud of him, he wants to be a singer more than anything; he’s only sang with his family so this is a big opprotunity for him.

Adam, Gwen, Blake and Pharrel all turn their chairs for Joe; Blake takes out a big hat and puts it on his head. Adam says he likes his whole vibe, like it’s his little brother and loved how he was having the time of his life. Gwen really liked his stage presence and feels like he is so good being confident on stage. Pharrel says he is a beast and that he knows how to get the girls to scream; he wants to better understand who he is. Joe decides he’s going to pick Adam as his coach.

Next up is Menlik Zergabachew and his parents were born in Ethiopia, they work at McDonalds and as Janitors to help pay for their own restaraunt; he started singing for fun and it was nothing serious for him since then. Though he loved it and he even dropped out of high school for his passion in music.

Blake turns and Gwen hits her button right at the end, Gwen says she loves that song and felt that she really liked his style; she loves his whole image as well. Blake says that is by far one of the greatest techniques he’s heard all day, he really felt his singing and loves his hair. Menli decides he’s going to join team Gwen.

Next up is Jimi Milligan and has been a musician since he was 13 years old, his father died when he was 19 and he was his biggest inspiration. Being a ftather makes him happy and he takes care of his kids; his future is now and hopes he can win the coaches over with his voice.

None of the coaches turn for him and Blake tells him that he’s a good singer; though says that the performance wasn’t quite solid enough. Pharrel says that he was a great singer, he was hoping for Jim to take more risks with the song. Gwen says that he had to bring some more exciting moments.

Next up is Reagan James and she went to see Kelly Clarkson as a kid, her father is a guitar player and has really inspired her tons with music; she did a live performance in her home town when she was nine years old and knew she’d love to do it. She let sports go to play music, it’s her love and passion in life.

Blake and Gwen turn for Reagan, Gwen begs for her to join her team and mentions she was seventeen when she started her own band; she was so you and believes her voice is so much better. Blake says that he’s won this show several times, he knows how to shine the right light on an artist and knows he can win it with her. Reagan decides she is going with Blake.

Next up is Taylor Phelan who started his own band and he had to quit it to take care of his child, he is now a graphic designer but now really wants to pursue his love for music because it was his first love; his wife even supports this choice. He hopes the Voice can help make music his career, he wants to take care of his daughter and wife.

All the coaches turn for him, Adam loves seeing how lost he was into his performance; he realy loves how different he is as an artist. Gwen felt like she was sitting at a music festival, his singing was perfect. Pharrel felt like the guitar was a part of his body, though he did nothing with it for most of his performance. Blake says his style of stage presence that he could do anything, he could easily win the voice with that and his powerful voice. Taylor decides he’s going to go with Pharrel as his coach.

Next up is Caitlin Lucia and loves to sing, song write and collect PEZ despenser; she has well over 1,000 of them. She at first was in choir, though she wanted to stand out as a singer and even did gigs at the local mall to get an idea of how to perform.

None of the coaches turns around for her, Gwen says she has an amazing voice; Pharrel loved her tone though in the first 30 seconds he felt like he knew all there was to her. Adam loved hearing her and it was amazing, she wants to hear her focus more on her own style. Blake says that he wasn’t crazy about the style thing she did in her pronouncing of words.

Next up is Sugar Joans, her dad was a singer in the 80’s and has performed with several incredible people; he is her biggest inspiration. She wants to pave her own way now and make her father proud, he believes in her completely; she wants to pursue music and do it full time.

Blake and Gwen turns around for Sugar, Blake says that she has one of his most favorite voices ever in all the years he’s done the show; Blake says she has him day dreaming. Gwen says she wants to perfect her vocals and make her into the perfect artist, she has so much talent. Sugar chooses Gwen as her coach.

Next up is Taylor Bashears and she is a cashier in a food truck, her brother owns it and she deals with people all day; she enjoys working with him but music is her true passion in life. She loves singing and has had her own band, though being a solo artist means so much to her.

Blake, Pharrel and Adam turn their chairs; Adam tells Taylor to break the mold and join his team instead of Blake’s. Pharrel says that he will listen and learn, he loves her tone and loves her confidence. Blake says that she sang that song so well and it wasn’t something he’d hit his button right away because he needed to hear the whole song; he knows he can take her far down the country route. She goes with team Blake.

Next up is Andy Cherry, he started singing at a young age and he before he got married he signed to a Christian record deal; he tried to please everyone and his sales were disappointing and he was dropped. It crushed him and made him depressed, his wife told him to audition and she supports his dreams so much.

Nobody turns around for Andy, Blake says there was a lack of control in some areas and too dramatic for him. Gwen agrees, everytime he played with the melody it harmed it, he has a very good voice as well. Adam says it was too different and it lost him.

Next up is Maiya Sykes, her mother sang back up for Earth, Wind and Fire as well as many other famous artists. Her mom worked three jobs to help her get through school, Maiya went to Yale and told her to take music as her studies. Maiya’s mom is so proud of her daughter and all her work, she believes in her talent completely.

All the coaches hit their buttons and turn around for Maiya, Blake says that she made his day; he says that the other three might seem more qualified and he admits that they aren’t because he knows he can help her win. Pharrel loves how she tells her owns story with her singing and has such a beautiful voice. Gwen says she is perfect and needs to bring out a unique style to it as well; she will have success on this show. Adam says she has to make sure she hits the ball, he believes that he can help her and make sure that he won’t take her talent for granted. Maiya decides she’s going to join team Pharrel.