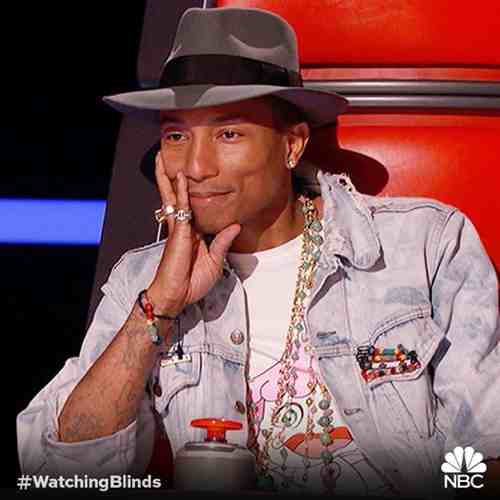 On the last episode it was the fourth episode and the blind auditions continued , things began to get heated for the judges as the two veteran judges, Adam Levine and Blake Shelton faced off against each other and two rookie judges Pharrell Williams and Gwen Stefani. One performer that all the judges loved was Chris Jamison; he’s in college and a triplet. All the coaches turned around for him, but in the end, Chris decided he was joining team Adam. Did you watch the episode? If you missed it we have a full and detailed recap right here for you.

On tonight’s episode the fifth part of the blind auditions will be taking place, we’ll be seeing the judges work on creating their teams for who they think has potential of becoming “The Voice.”  There are only 2 places left on the teams now so we are coming down to the end of the Blind Auditions.

Tonight’s season 7 episode 5 is going to be exciting. We’ll be blogging it right here for you. In the meantime hit up the comments section and tell us your thoughts on season 7 of The Voice and the two new judges, Pharrell Williams and Gwen Stefani.

The first act of tonight is Matt McAndrew, he lives in an apartment right now with his mom and sister; he works at a grocery store and does some voice lessons as well. Matt got into a university for arts and has found it very tough to ballance it with his two jobs, he really wants to get the opprotunity to work with one of the coaches; he hopes this audition can change his life.

Adam, Blake and Pharrel hit their buttons; Adam says that he had to get in on this right away because he was so moved by his voice and felt like he was witnessing a very accomplished artist when he turned around. Gwen says he has a beautiful voice and his emotion was incredible. Blake says his voice is so original and really got interested by it. Pharrel says that he will let him sing whatever he wants, his tone has no official genre and it’s incredibly unique; he really wants to work with him. Mat decides he’s going to join team Adam.

Brittany Butler is next, she grew up with her mother and was amazed how she was sick a lot and raised her, her grandfather got her a guitar when she was young and it really developed her love for music; her grandfather passed away in 2009 and he was such a big support. She hopes to get a coach to turn around for her.

Gwen and Pharrel both turn aorund for Brittany, Gwen says that luckily she turned around fast to see her performance; she loves her style and whole way of performing and believes they’d work well together. Pharrel was amazed to how she graced such a jazzy song. Britany decides she’s going to choose Pharrel to be her coach.

Evan Watson is up next, he made his own beer and sells it at a stand outside; he started off playing around on guitar with his father. He once opened for Meatloaf and after his first album it was hard; he needed stability and left music behind. Now he wants another chance at it and knows this is his last shot, he hopes he can get at least one coach to turn for him.

Nobody turned for Evan, Blake says there is like no space left on his team and believed he used to much of the growl in his voice. Adam says that he has to control it and he’ll do very well. Gwen says that he has to work on using it right at the best moments, then he’ll find good success.

Next up is Ryan Sill and he has two sister who sing as well, his entire family is so excited about this opprotunity and he has gone to university for engineering; though he truly love music a lot and would love to pursue it instead. He hopes a coach can turn for him, he wants to prove to his parents that this was the best option for him.

Gwen, Blake turned around for Ryan, Blake says the he looks exactly as his voice sounded and knows he’d make a perfect addition to his team. Gwen says that it was so good and usually doesn’t hit her button so quickly; she was really impressed by him and believes they can work on some stuff together to help him improve a lot. Ryan decides to go with Gwen.

Next up is Fernanda Bosch and she is from Florida, music is a huge part of her culture and it has really influenced her a lot; her mom is a swimmer and is now a swimming instructor right now. Fernanda has been trying to find ways to branch out and get more well known; she never had vocal lessons so she feels a coach will surely help her a lot.

Gwen and Blake turned around for Fernanda, Adam loved the song and really enjoyed the key change in the end and can’t wait to see them to fight. Blake says she has that natural rasp that when she go into her upper register it is bad ass, he believes it is so team Blake. Gwen says that she is trying to compare how she was at her age, she was really impressed with her range and timing. Fernanda decides she is going to join team Blake.

Next up it’s Beth Sprangler, she works at a Children’s Hospital in Georgia and her favortie part of the job is to help kids; though her true passion is music. She really wishes she could pursue it and do it for a living, she wasn’t able to focus on music before because he dad had a bad motorcycle accident and he lost his leg; he’s been a huge inspiration with how much he fought to walk again. She really wants to someone to turn for her, she loved to work with a coach.

All the coaches turn around for Beth, Pharrel says that she sang that song so effortlessly; she was going to sit out but he really felt she was something unique and wanted her on his team badly. Adam says that it took him a long time to find where he fit in, he really loves how different she is and sounds. Gwen says her range is crazy and can’t believe she was singing so perfectly, she knows they can do tons of fun things together. Blake says that she was meant to be on team Blake and knows he can work with her. Beth chooses Adam to be her coach.

Next up is Erin Kim and he is from California, he is from a Taekwondo family;he loves music because of how his father loved it and played it a lot. He went to an open mic at 18 and really liked it, during high school he’d sing a bunch of soul; he’s performed at a lot of colleges and wants to finally get a little boost.

None of the coaches turned around for Erin, Gwen says it was a really creative version of the song; though his choice of changing the melody was too much but his voice was great. Pharrel couldn’t figure out the song, though really liked it. Blake heard a pitch issue in the middle and would have surely pushed his button if he didn’t hear it. Adam says his team is full and hope she comes back, he knows he can surely succeed.

Next up is Griffin, when he was a kid he played music with pots and pans; he wanted to go to Nashville to establish himself into an artist but he couldn’t afford it. He has very good relationships with his siblings and they really help him a lot; he started his own business to help make the money he wanted.

Blake, Pharrel and Gwen turn around; Blake says that he loved the song choice and really loved his performance. Pharrel says his range was very perfect, he was very clear and had strong notes. Gwen says that she loved his voice and would really like to work with him. Griffin decides that he’s going to join team Pharrel.

Chandra Knudsen is up next and she right now works aas a graphic designer, she started singing at 5 and has done the talent show 13 years in a row; she also has a Batman obsession. She loves anythingand everything Batman, she really hopes someone turns for her.

Adam says it was great, Gwen had no idea what kind of singer she wanted to be; it confused her a lot. Blake says she was sharp a lot and over shot the notes, she has to just contain her voice more. Pharrel says her voice is beautiful and has to pick a song that makes her voice stick out.

One of the last artists of tonight is Mayra Alvarez and really wants to make her family proud, she started singing from a very early age and her father supported her a ton in ther life. He’s sacrificed a lot for her, she hopes a coach turns around for her.

Blake and Gwen turned for her, Blake says that he had Jake Worthington last year from the same place and tells her that she can win with him; making sure that she succeeds. Gwen says she loves that song and she worked it so well with changing the melody. Mayra chooses Gwen to be her coach.

The last artist of today is Justin Johnes and he is only 15, when he got to grade 6 he was really into music and loved to sing; this is his very first big performance ever. His mother is a huge support for him and he has a key on his chest that says dream, to remind him to always chase it no matter what.

Blake hits his button for him right at the end of his performance, Justin says it’s his first performance in front of a crowd. Blake can’t believe he is just 15, he knows there is so much potential with him and that he has a lot to do with him; Blake gives Justin a shirt that says “Blakes Boo”.