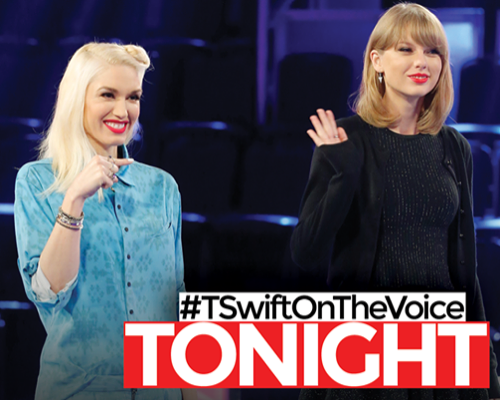 Tonight on NBC the Emmy award winning music competition The Voice continues with an all new Tuesday October 28, season 7 episode 12 called, “The Knockouts Premiere Part 2.” On tonight’s episode, the knockout round continues with top team members selecting their own songs to perform individually.

On the last episode the knockout round began and the top team member selected their own song to perform, Taylor Swift guest judged. Did you watch the last episode? If you missed it, we have a full and detailed recap right here for you.

On tonight’s episode the “knockout rounds” continue with coaches Adam Levine, Blake Shelton, Gwen Stefani and Pharrell Williams’ strongest team members remaining from the battle rounds. The artists will be paired against a teammate once more, but this time they will select their own songs to perform individually, while their direct competitor watches and waits. Superstar Taylor Swift will serve as a key adviser and be on hand to work with all of the coaches and their teams as they prepare the artists for this challenge. The coaches alone will choose the winner to move on to the live shows and the artist not selected will be available to be stolen by another coach. Each coach has one steal available during the Knockout Rounds.

Tonight’s season 7 episode 12 is going to be exciting. We’ll be blogging it right here for you. In the meantime hit up the comments section and tell us your thoughts on season 7 of The Voice and the two new judges, Pharrell Williams and Gwen Stefani.

First up is Gwen’s pariing Taylor John Williams and Troy Ritchie; first up is going to be Troy and he couldn’t believe Taylor Swift was there to coach him. Troy decided to sing “Hey Yeah!” by Outkast, he wants to show the personality he wants to have as a performer; Gwen wants him to take it to a whole new world and make it into something very different.

Next up is Taylor and he’s going to sing “Mad World” by Gary Jules, he loves the message and the emotional vibe from the song. Taylor is going to make sure his nerves don’t get the best of him and he will try to prove why he’s still here.

Adam says that they both did awesome, he says Troy is out of his mind and loved his bold performance; though Taylor was far more serious and won it for him. Blake thinks Taylor did an amazing job, though Troy was so entertaining and absolutely loved the whole thing. Pharrell says that Troy exploded on stage showing his true character, though Taylor was very hypnotic. Gwen says that Troy is the type of voice she wants to listen to and was proud of how perfect he did the intro and dancing. Though Taylor was very good too. The winner of the knock out is Taylor. Troy tells Gwen that the whole experience has been amazing and feels that he’s truly blessed.

Adam’s pairing is Alessandra Castronvo and Mia Phirman; first up is Mia and she has been a fan of Taylor’s for so long and is so happy to work with her as well. She’s going to sing “Human” by Christina Perry, Adam is very supportive of this song; Mia wanted to try something different this time around. Adam and Taylor Swift agree that she does good on the high notes, though the beginning needs to be a little stronger; they feel like she could do very well.

Alessandra is bringing everything she’s got in this round, she loved working with her family but believes it’s time she chases her own dreams. She is singing “Next To Me” by Emily Sunday, Adam thinks she sings so effortlessly and needs to really put more emotion into singing these notes; though she has to grit up her voice a bit not to sound like the original artist.

Blake said Mia chose an amazing song for her powerful voice, though Alessandra has a cutting voice it also brings some softness; though he believes Alessandra’s voice is more unique. Pharrell felt that Mia’s last note was perfect, though Alessandra pulled him in and would pick her. Gwen loves both girls and wouldn’t be able to choose, giving a slight edge to Mia. Adam says he’s super proud of Alessandra, though Mia is so confident and polished; it was so perfect. Adam decides the winner of this knock out is Mia. Alessandra thanks Adam for all his help and it has been an honor to sing on stage, Blake didn’t go for a steal because he’s still waiting for perfection.

Next up is team Pharrell with Elyjuh Rene and Ricky Manning, he loves their soul and R&B vibe. Elyjuh was freaking out when he saw Taylor Swift, but held himself back so much when he saw her; he chose the song “With You”. Pharrell likes his song choice, but has to really show the emotions better and can surely kill it.

Ricky says everything seems so surreal, he has no idea how he possible has made it this far in The Voice. He’s decided to sing “Wrecking Ball” by Miley Cyrus, he wanted to take a ballad and believes it’s the perfect song to sing for tonight; wanting to show a different side to him.

Gwen says that Ricky,is without a doubt a star; he almost made her cry. Though Elyjuh was missing a bit in the connection in the lyrics to him, though he has an amazing voice. Adam says Elyjuh didn’t make any mistakes, though he didn’t have the emotion Ricky he had. Blake really liked Elyjuh’s run though felt he coasted on the song, though Ricky just let out his star potential and is without a doubt his favorite performance. Pharrell says Ricky killed it, though Elyjuh did the vocals perfectly; but he didn’t connect to the lyrics as well. For that reason alone he’s going ahead with choosing Elyjuh as the winner of the battle. Ricky tells his coach that he is the reason for his performance being so good, though Gwen goes to steal him and believes she could win the show with him on her side.