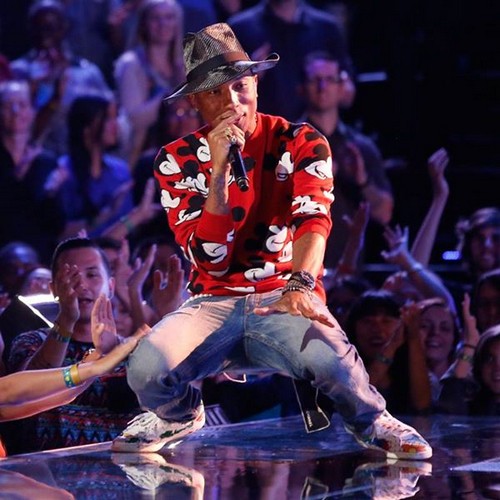 Tonight on NBC the Emmy award winning music competition The Voice continues with an all new Tuesday November 11, season 7 episode 16 called, “THE LIVE PLAYOFFS, NIGHT 2.” On tonight’s episode, the remaining Top 20 artists perform as the playoff round continues and Pharrell Williams will be performing.

On the last episode the top 20 artists performed in front of coaches Adam Levine, Blake Shelton, Gwen Stefani and Pharrell Williams. Carson Daly (“Last Call with Carson Daly”) hosts. Did you watch the last episode? If you missed it, we have a full and detailed recap right here for you.

On tonight’s episode, the Live Playoffs have begun and more artists will perform tonight, with two artists from each team advancing from the viewers’ vote, and each coach rounding their team up with their own choice.

Tonight’s season 7 episode 16 is going to be exciting. We’ll be blogging it right here for you. In the meantime hit up the comments section and tell us your thoughts on season 7 of The Voice and the two new judges, Pharrell Williams and Gwen Stefani.

Kicking off the night is Pharrell Williams performing on stage, though team Gwen is starting off the night with Ryan Sills; Gwen says he has to be a boy band guy. Ryan is surprised that she took time to research him, he is singing “I Live” by One Republic; he has some awkward movements and she is trying to show him exactly what she wants to see him doing as he performs.

Adam says that it was nice, he has always been a favorite of his and told Gwen to watch him; he believes his pitch very good and his confidence is high. Blake says that he did a good job. Pharrell says that he can see him really want this, he is very impressed with how he cracked out of his shell. Gwen says she feels so emotional and her positivity is so nice; he is always confident in his abilities and she loves it.

Next up is team Pharrell with Jean Kelley and many people who have lost family members have message her about it; after her own mother passed away she has had a lot of struggles. She worked in school and paid off her own college, she is ready to take on bigger challenges. Pharrell gives her the song “Piano in the Dark” by Brenda Russell, Jean really wants her to add more drama in her performance and convey her lyrics with all she has.

Gwen says that every time she performs she has to sit back and take it in, she loves her outfit and loves that song so much; it was a really good performance. Adam says that he believes she has to strike a balance between the emotion and focusing on the lyrics. Pharrell says that it’s going to be amazing if she keeps pushing and does agree with Adam about the drama.

Next up is Ely Juh Rene and he talks with Pharrell about the fact that many people say he over performs when he sing; Pharrell tells him that he is fine and that he has to keep focusing on his singing and wants him to sing with no fear. Ely Juh is singing Latch by “Disclosure”.

Gwen says that watching him now and before shows how much better he has gotten, his confidence on stage and performing was just so amazing. Adam says that it’s crazy because that was one of the best performances he’s seen, it was perfect and he really just became a front runner. Blake says without a doubt he’s the one to beat right now after that. Pharrell says he agrees with all of them and he is super proud of him, he truly showed everyone how talented and strong he is.

Next up is team Gwen with Bryana Salaz and she’s singing “Amnesia” by 5 Seconds of Summer, this is a song with men so she has to surely make it her own and Gwen wants her to really make it something unique. Bryana wants to connect with America and deliver the emotion needed.

Adam says that first of all at her age she just brings so much confidence and emotion, he could never be in her shoes when he was her age. Blake says it’s crazy seeing her get better in just that performance. Pharrell agrees with Adam and Blake, Gwen is perfect as her coach and he could not be happier; he knows she will only keep getting better from here on out. Gwen says she loves her and is so proud of what she has done.

Next up is team Pharrell with Luke Wade and after being on the show he has sold a lot of records, he is so happy seeing everything changing. Luke is singing “Lets Get It On” by Marvin Gaye, it’s a timeless song and Pharrell knows he can perform it well. Pharrell knows he has the talent, but he just has to stop over thinking the whole thing.

Gwen says she got so lost in the moment and thinks it is so incredible; he did the original so much justice. Adam says that he can’t even say anything, it was just so amazing and knows he can do any song he wants and he’ll still love it. Blake says he couldn’t see for sure but he knows a lot of the audience felt his performance, he really liked how he had fun with it. Pharrell says Luke killed it.

Next up is team Gwen with Anita Antoinette and she never saw this coming at all, she is so happy to have made it this far. Anita is singing “All About That Bass”, Gwen chose this song because it’s fun and she can work her stage presence with it; she wants her to show some attitude. Anita gets her confidence from Gwen believing in her so much and will make her proud.

Adam says he has no idea who she is, he loves her personality and confidence in that song; he thinks she is so cool. Blake says that it’s hard to believe that she has ever had stage fright, she looks like she owned that stage. Pharrell says that he is so proud of her and what she’s gone through, she has really risen to the occasion. Gwen says she loves her and thinks tonight was very great; she has such a natural ability to be liked.

Next up is team Pharrell with Danica Shirey and her daughter loves Pharrell, he gave Danica “Help Me” by Joni Mitchell; he wanted to give her a very difficult song and really see how far he can push her. He knows that she is talented and this is exactly the type of risk she needs to prove herself.

Gwen says she loves that song with a passion and is happy she singed that song, she was surprised with how much justice she gave the original. Adam loves how she made the song her own, it was such a good choice. Blake says that he never heard that song before, though the singing was so perfect; especially the stuff at the end.  Pharrell is amazed with all she can do with her voice.

Next up is team Pharrell with Sugar Joans, he is so excited to work with her and she is equally is happy; Pharrell brags about her a lot and feels they have a future together. Her dad had a lot of songs from the 80’s and it’s what gave her a passion for soul. Pharrell gave her the song “I Say a Little Prayer” by Aretha Franklin.

Gwen says that was just amazing, she had her moment for sure and it was such a perfect song choice. Adam says that was church, it was crazy and could not believe that came out of her; she is so talented and he did not see it coming. Blake believes that was by far the best performance of the night and can’t believe how unique her sound is. Pharrell says he felt every moment of that performance and knows it will be fun to work with her in the future.

Next up is Ricky Manning who Gwen stole from Pharrell in the knock outs, Ricky loved Pharrell but is excited to work with Gwen; a lot of people didn’t believe his dreams to be a musician. He is so excited to be singing for millions of people, he is singing “Lay Me Down” by Sam Smith. Gwen wants him to really bring in the emotional factor, if he can do better than his last performance he will surely shock people.

Adam says the coolest thing about him is that he basically makes everyone a believer of him and he can surely see the passion in him as he performs. Blake says he was so calm but in control. Pharrell says he knows Ricky wants it and listening to his performance now is so amazing; he is very proud of him. Gwen says she is so proud of him and that his performance was spot on.

Adam says that he is a huge fan of his and finds it amazing that he felt like the song was something to make a bit more emotional, he was very impressed to see him feel the same way and change it up. Blake says that it was a great job, he believes that the half time thing worked well. Gwen says that he is amazing and he has a vision for himself, she really loves him and how he knows what he wants.