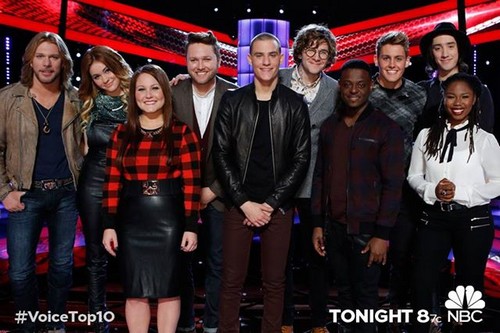 Tonight on NBC the Emmy award winning music competition The Voice continues with an all new Tuesday November 25, season 7 episode 21 called, “Live Eliminations,” and we have the weekly recap below. On tonight’s episode, two artists are eliminated in a results edition. Taylor Swift is slated to perform.

On the last episode, the top 10 artists performed live in front of coaches Adam Levine, Blake Shelton, Gwen Stefani and Pharrell Williams for America’s vote. Did you watch the last episode? If you missed it, we have a full and detailed recap right here for you.

On tonight’s episode, America’s votes will be revealed to determine which two artists will be eliminated from the competition and we will have our Top 8. Carson Daly (“Last Call with Carson Daly”) hosts.

Tonight’s season 7 episode 21 is going to be exciting. We’ll be blogging it right here for you. In the meantime hit up the comments section and tell us your thoughts on season 7 of The Voice and the two new judges, Pharrell Williams and Gwen Stefani.

Adam says that he is super confident his team will get through again, he knows they have been working hard and they have done amazing performances. Gwen says right now her stomach is getting knots, she is so nervous and anxious; she is really attached to her team. Pharrell says that he is pleased with his teams work and thinks most of his confidence is with how they have been performing. Blake says with Raegan she is far ahead of her time, but with Craig it’s just way to unbelievable that he hasn’t even been discovered yet.

Next up is Pharrell with his team singing “What a Wonderful World”. The fifth person saved by America tonight is Danic Shirey and the sixt person saved tonight is Chris Jamison.

Now we are having Taylor Swift performing on stage with “Blank Space”, we now see all the contestants get a Thanksgiving dinner and their families were there to be with them and support them. The last person saved by America is Damien, all of team Adam is moving on the next live show.

Next up is Reagan James singing “I’m Like A Bird” for a chance to be instantly saved by America, Blake says that he loves her and that she is so young; yet she keeps being different.

Next up is Anita Antoinette singing “The Remedy”, Gwen says that she is an incredible person and loves getting to know her; she cares so much about music and life. She has learned a lot from her, she truly deserves to be here and America needs to vote for her.

Next up is Ryan Sill singing for his life with “Collide”, Gwen says that he is so talented  and deserves to be here without a doubt; she really hopes he gets saved tonight.