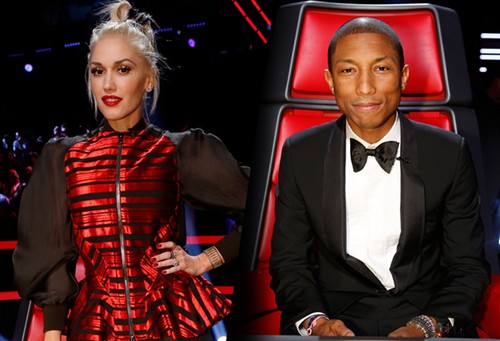 Tonight on NBC the Emmy award winning music competition The Voice continues with an all new Tuesday December 1, season 7 episode 22 called, “Live Top 8 Performances,” and we have the weekly recap below.  On tonight’s episode, as we race to the finale, the Top 8 artists perform.

On the last episode, America’s votes were revealed to determine which two artists were to be eliminated from the competition and we had have our Top 8. Carson Daly (“Last Call with Carson Daly”) hosted. Did you watch the last episode? If you missed it, we have a full and detailed recap right here for you.

Tonight’s season 7 episode 22 is going to be exciting. We’ll be blogging it right here for you. In the meantime hit up the comments section and tell us your thoughts on season 7 of The Voice and the two new judges, Pharrell Williams and Gwen Stefani.

First up tonight is our top 8 singing “Geronimo” by Sheppard, the artist kicking off tonight’s top 8 live show is Ryan Sill from team Gwen; he needs to break out of the bottom three having been in it for three weeks. Ryan is singing “Open Arms” by Journey, it’s a powerhouse song and he sings in such a beautiful way; she wants to show off his vocal abilities.

Adam says he is always shocked to see Ryan in the bottom three, he is incredibly good and even tonight proves once again that he belongs here. Blake says that there isn’t much else he can do to not be in that bottom three; he is always solid and tonight was his best. Pharrell says that he continues to progress and keeps surpassing his limits. Gwen says he is so talented and gifted, he keeps improving and even had tears in her eyes because of how hard he works.

Next up is team Blake with Craig Wade Boyd, he remembers playing in a club with nobody inside of it and now he’s playing for millions. Blake gave him “Take It Easy” by The Eagles, he knows that Craig can knock this one out of the park; he knows that Craig can do any song he puts his mind to. He wants him to really bring it from the heart, make the audience be amazed by how good he is.

Pharrell says that he sang that song so amazing, the show is totally his and can understand why people love him so much. Gwen says she agrees, she felt like she was at the country music awards; he is so professional. Adam says it was awesome, he had an incredible moment last week; though felt this performance was very fun and a great choice. Blake says that he is glad Craig is his last man standing, this performance had him nervous as hell; though he completely did the song justice.

Next up is Danica Shirey from team Pharrell, she is singing “These Dreams” by Heart, Pharrell always gives her songs that he knows she can make her own; this one is pretty hard and knows she can do it without a doubt. He is trying different genres with Danica, because she can without a doubt do Grammy worthy performances.

Gwen says that was beautiful, it was a great song choice; she can pretty much do anything with her voice and this is exactly the type of song she should do. Adam says that it was incredible and loved that song a lot, she can pretty much sing the dictionary. Blake says she has been one of his favorites from te beginning, he keeps forgetting how little she is; but has such a powerful voice. Pharrell says that this is exactly what he was talking about, she took this song and performed it so amazingly.

Next up is the top 8 singing the song with Nick Jonas.

Next up is team Adam with Damien, he has to sing a song that he crushes. Adam gave him the song “Someone Like You” by Adele; Adam feels like the emotional feeling in his voice makes it as if he is the only one who could sing her music. Damien loves being an emotional singer, he has always wanted to touch peoples hearts with his voice. Adam has helped him grow so much, before his blind audition he almost got a record deal but was pushed back a lot; though he is glad to have this chance right now.

Blake says that this is the best season yet, he could swear he was a singing machine if it weren’t for all his emotion and passion; it was perfect. Pharrell says that every week it’s crazy how he effortlessly just sings the notes, he is so proud of him. Gwen says it was so beautifully and she loved it. Adam says that he has no idea what to say anymore, every week they sit and talk; though Damien always wanted to do this song so he let him take it on and making it his best performance yet.

Next up is another team Adam with Chris Jamison, he wants Chris to do “Sexual Healing” by Marvin Gaye; it’s one of his favorite song and was amazed with how Chris actually connected to the song so perfectly. Chris is so happy that Adam has transformed him into the entertainer he’s meant to be.

Pharrell says that was hands down his best performance on the show, the way he just got lost into the song was amazing; he hit every note perfectly and commanded the stage with ease. Gwen says she had a moment of thinking of the lyric, though it was amazing for him to take it on. Adam says that he is like Luke Skywalker and he’s a younger Obi Wan Kenobi; he is so proud seeing him just completely crush that song.

Next up is team Pharrell with Luke Wade, he has been given “Holding Back Tears” by Simply Red; it’s a song many people may have never heard in the generation. Pharrell wants him to make it his own song and kind of share this beautiful song with other, he knows Luke can pull it off.

Adam says he is a fan and has been one from day one, he wants Luke to stop thinking as he sings; he loves how he just lets it all pour out. Blake says that the performance had a lot of scarce singing, it had no loose cutting and they expected him to have more big moments; it was cool though and liked it. Pharell says he understands what the others are saying, though he says that without letting go he without a doubt is far better than most.

Next up is team Gwen with Taylor John Williams, she decided to give him the song “Royals” by Lorde; wanting to see how he makes the song his own. Taylor feels like he wants to take an angry approach to the song, he is very motivated to twist it completely; though is going to work on his stage presence completely.

Blake says it was a great job, no matter what he does he always spins the songs he does as his own; he’s surely a pure artist. Pharrell says the way he comes out with such a soulful hippy in his mind; he is anticipating his first record. Gwen says that she is just amazed, he keeps doing the song in the way he wants to; she never has to really help him.

Last up tonight is Matt McAndrew and Adam chose him the song “Blowers Daughter” by Damien Rice, Adam felt like this song is the ultimate love song and is so interested to see how Matt takes it on; he knows he can without a doubt do this song justice. Matt is always used to playing by himself, he likes having it just be him on the stage alone tonight.

Blake says that he has never heard that song before, though is glad of that; he is proud he was introduced to it by Matt. Adam says that love is crazy, though it is brutal and painful; he truly translated all the emotions perfectly. Is beyond proud of him and adores him.