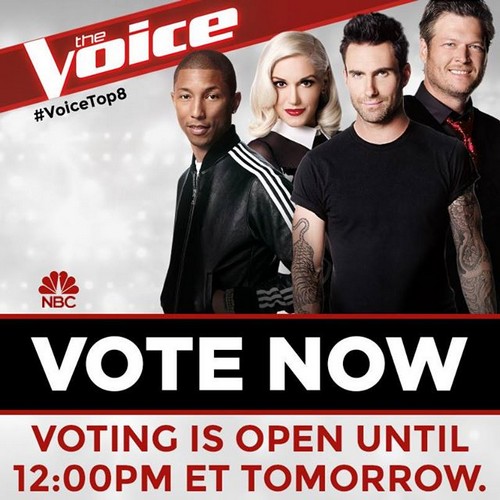 Tonight on NBC the Emmy award winning music competition The Voice continues with an all new Tuesday December 2, season 7 episode 23 called, “Live Eliminations,” and we have your weekly recap below. On tonight’s episode, three artists are eliminated in a results edition and we will have our Top 5.

On the last episode, the top 8 artists performed live in front of coaches Adam Levine, Blake Shelton, Gwen Stefani and Pharrell Williams for America’s votes. Carson Daly (“Last Call with Carson Daly”) hosted. Did you watch the last episode? If you missed it, we have a full and detailed recap right here for you.

On tonight’s episode as per the NBC synopsis, “America will vote to eliminate three artists and the remaining five will continue in the competition with coaches Adam Levine, Blake Shelton, Gwen Stefani and Pharrell Williams. Carson Daly (“Last Call with Carson Daly”) hosts.”

Tonight’s season 7 episode 23 is going to be exciting. We’ll be blogging it right here for you. In the meantime hit up the comments section and tell us your thoughts on season 7 of The Voice and the two new judges, Pharrell Williams and Gwen Stefani.

First up tonight is team Adam’s finalist last season Christina Grimmie with her single “Must Be Love”. Now we are going to see the very first artist to make it into the next live show in the semi-finals and that artist is Matt McAndrew.

Adam says that they managed to not be in the bottom three, he hopes it can keep up for tonight. Gwen says she was so proud of her team, they work so hard and are always willing to take a challenge. Pharrell says that for him he thinks more than his name should be on the walk of fame, all those around him really developed who he has become and loves this team for being so different; they are the type of artists that know exactly who they are and it makes it so cool. Blake says he feels a ton of pressure, he really wants Craig to win; he is pushing him harder to make sure he stays. The second artist moving on to the semi-finals is Damien from team Adam.

We now see a behind the scenes of what the contestants do in their spare time, but next we see a former team Blake member with her single “God Made Girls” by RaeLynn.

The third artist to move on to the semi-finals is Taylor John Williams from team Gwen.

The last singer saved by America tonight and moving on to the semi-finals is Craig Wayne Boyd, Blake says that he is so happy; the results so far are not that surprising yet is as well. He feels like all these people could easily move on, but it’s all up to America; it’s the best group of artists the show has seen yet. Next up is Danica Shirey singing for her life with “I’d Rather Go Blind”.

Pharrell says that first of all that everyone just saw, heard and felt that performance; it was really well done. He asks America to go with their heart and she deserves to be here. Next up is team Pharrell’s Luke Wade singing “Stand By Me”.

Pharrell says that he loved it and again it’s the toughest thing; it’s all up to America to choose how they feel was the most connected to them. He knows they have so much to do, the music inside of him is something all should hear.

Next up singing “Heaven” is Ryan Sill, Gwen says she thinks Ryan could be saved three times in a row; he just always shows people how great he is at singing. He did such a great job and loves watching him improve every single time.

Next up is Chris Jamison singing “Georgia On My Mind”, Adam says that he without a doubt always works hard for all he has; he doesn’t give up and approaches music with such a strong passion and belongs here.

The artist instantly saved by America is is Chris Jamison from team Adam; once again he has lost none of his team so far.