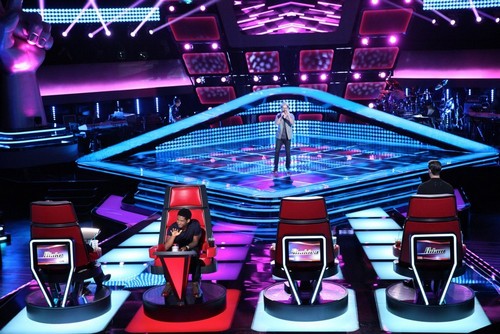 Tonight on NBC their Emmy Award winning music competition, THE VOICE returns with another new episode as the “Blind Auditions Continue Night 6” and the judges,  Shakira and Usher, Adam Levine and Blake Shelton continue to look for artists to fill their teams.  This is the last night of Blind Auditions and the judges will have one last time to fill their teams.  Did you watch last night’s blind auditions Night 5?  We did and we recapped it right here, for you.

On last night’s episode we were down to a handful of open slots for the teams, which meant the competition got fiercer and the coaches got pickier than ever.  On last night’s episode the best performance of the evening was from Josh Kaufman.  Josh is a father; he’s a working musician. He feels like doing music for a career wont be for him anymore since it isn’t making enough; this is his chance to live a life that he not only loves but can support his family. Josh is singing, “One More Try.”  All the judges hit their buttons for Josh, but at the end Josh chose Adam as his coach.

On tonight’s episode  the coaches, Adam Levine, Blake Shelton, Shakira and Usher fight hard to fill out their teams with the best new artists. It is the last night of the “blind auditions”  and the judges will have their teams and will be ready to move on to the battle round.

Tonight’s “Season 6 Blind Auditions Night 6 continue” is going to be an exciting one, which you won’t want to miss. So be sure to tune in for our live coverage of NBC’s The Voice – tonight at 8PM EST! While you wait for our recap, hit the comments and let us know how excited you are about the return of The Voice.

First to audition is Joe Trombino and he went to school for dance, he has done many music videos with several popular artists such as Beyonce; his grandmother suffered a stroke so he moved back home to take care of her. His mother is proud of him, but wants him to chase his dream. Joe is singing “Love And Happyness”

Nobody turns for Joe, Adam says he was so far behind the beat that it really put him off from the song. Usher believes he was vocally good but he just didn’t give him enough to make him want to turn.

Next up is Kaleigh Glanton, after her parents got divorced she stayed with her dad and both play guitar together; they started a duo together and once she was 16 she started singing. Kaleigh does a lot of working out and loves it; she would open a gym if music wasn’t her passion. Kaleigh is singing “Have You Ever Seen The Rain”

Adam turns around for her right away and so does Shakira; followed by Blake and a last second button hit from Usher. Adam says that the exciting thing was that her voice was different, he believed her great moments really excelled. Shakira adored the sound of her voice, it was quirky and very appealing to her; believing she should be her coach. Usher says that there is a unique quality to her vioce, yet a gentle tone; Blake says that she has her style and just needs a spotlight that he can set up for her. Kaleigh decides she wants Blake to be her coach.

Next up is Brittnee Camelle, music helped her to express herself and be proud of herself; her mother says this is her passion and that she is strong. Britnee is risking her scholorship to be on The Voice; Brittnee is singing “Skyscraper”.

Usher turns around and right at the last second Shakira hits her button. Usher says her voice is nice and heard something very genuine; he like her high note a lot and wants to be the support to make her the incredibly artist that she is. Shakira says that she was amazed by her high note and as a fellow female artist and wants to help her make it to the top. Brittnee picks Usher to be her coach.

Next up is Beau Thomas and he is a full time musician; work is seasonal for him and in 3 months in the year he has no work. Beau works hard for his family every day; his wife is proud of him and hopes their kids could be the man he is. Beau is completely self taught and would love to get some professional direction; Beau is singing “You Are The Best Thing”.

Nobody turns for Beau, Adam says that he is very optimistic and that people could learn a lot from him; Adam felt his voice was more interesting near the middle part. Adam thinks it needs work but it was good. Usher says he has great attitude, he would love to hear more grit in his voice.

Next up is Lindsay Bruce and she has always wanted to be a country singer; always turning to music for heart break. Her uncle passed on 9/11 and it really hit her hard; she wrote songs about him. There isn’t much opprotunity for music where she lives; this is her make or break moment. Lindsay is singing, “Even If It Breaks Your Heart”.

Adam hits his button and so does Shakira; Adam says that she did a stunning job at maintaining her control and making it pleasant to listen to. Shakira loves her original sound and believes that she as female artist can help her. Lindsay chooses Shakira as her coach.

The last artist tonight is Caleb Elder and he was socially awkward as a kid; he found his love with the piano at first. He was going into audio engineering but decided to pursue music; he currently works at a doughnut shop but wants to be able to play gigs every night. He has been listening to Adam since he was a kid; he hopes he can get a chair turn from him. Caleb is singing, “Groove Me”.

Adam hits his button and says that he loved his confidence while performing; though he needs to work on some things but his team is now full like the others.