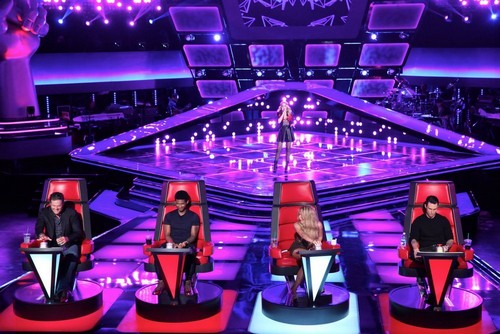 Tonight on NBC the Emmy award winning music competition THE VOICE is back with yet another round of completion. It’s finally time for the battle round to open with team members dueling in duets and the coaches enlisting help from star advisers Aloe Blacc, Jill Scott, Miranda Lambert and the Band Perry. Did you watch the last episode which featured the end of the blind auditions? If not then we have a full recap of it for you right here.

On the last episode the “blind auditions” continued and were held in front of a celebrity panel of coaches, including Adam Levine, Blake Shelton, Shakira and Usher. The strongest vocalists from across the country competed to be selected by one of the coaches and fight for a chance to win the title of being named “The Voice. Competition was absolutely fierce but the judges made their selections and now it’s time for serious battle.

Tonight team members will be pitted against one another vying for coveted positions that will allow them to stay in the competition. It’s going to be awesome and we’ll be recapping it right here for you as the performances unfold. In the mean time head to our comments section and tell us your thoughts on season 6 so far!

The first battle of tonight is from team usher and it’s Biff Gore Vs. T.J. Wilkins; Biff is a pastor and decided to leave a legacy for his children with The Voice and even turned all 4 chairs. T.J. was from a bad neighborhood and used music to help him stay out of trouble; he also turned 4 chairs. T.J. was amazed to see Jill Scott; the two of them are going to do a song by The Temptations “Ain’t Too Proud”. Jill wants them to be more aggressive with the song and really portray the roughness in their voices as if they are begging; Usher believes they have to really work on the conviction that makes them represent the emotions needed for the song to deliver properly.

Shakira says that Biff has amazing kicks; Adam says thank you and loved their performance. Blake says it was great and pure entertainment. Usher says that he is very happy by their performances and that they represent themselves so well; they each kept beating out each other and finds it hard to decide on an actual winner. Usher decides the winner is going to be T.J. Wilkins; Biff says that Usher is an amazing artist and wishes team Usher the best in this year. Blake right away goes ahead and steals Biff; Blake says that he is a great entertainer and hopes Biff can teach him his ways.

Next up is team Blake’s Jake Worthington and Lexi Luca; Jake returned this year after not turning a chair his first time last year, but this year he turned 3 chairs. Lexi found her courage to take the stage this year and got Blake to turn for her; she is very excited. Jake is really happy to be there and to see The Band Perry; Lexi and Jake are singing Thomas Rhett “It Goes Like This”. Lexi finds it intimidating to perform in front of some of the biggest names in music today; she gets really nervous and her voice gets shaky. The Band Perry helps them find their flaws when they sing and what they should do to perform better; Jake feels like that Lexi is more bubbly and can be more impressive than he is.

Usher says that was incredible, he could tell Lexi was a bit nervous and she should be more fearless and Jake blew him away with a stellar performance; he believes Jake won. Shakira says that Lexi has a beautiful voice and lots of potential; she loves Jake’s tone. Adam says that they both have big voices and loved how they filled the room; Adam believes Jake could take the whole thing being teamed up with Blake. Blake says Jake fumbled the lyrics a little bit and it doesn’t slide at all; he is proud of them both and decides that Jake is the winner of the battle. Nobody steals Lexi and it breaks Blake’s heart.

Next up is team Shakira with her adviser Miranda Lambert who is Blake’s wife, he first pair is Dani Moz and Deshawn Washington; Dani got Shakira to turn around with her solid voice and performance. Deshawn gave up all he had to take care of his family and sang a classic that inspired the coaches with his unique style. Dani was so happy to see Miranda, they are singing “My Kinda Love” by Emeli Sande; Deshawn says it’s sung by a woman and he likes to express the emotions as a man with the lyrics. Shakira loves how well the two are vibing together; Shakira believes this will be one of the most difficult battles for her.

Adam says that it was awesome and said they had great movement and natural chemistry; Adam honestly can’t pick a winner. Blake says that Dani did all the amazing upper stuff though Deshawn surprised the hell out of him and would go with him as the winner. Usher says that Dani really understoof the emotional levels she needed for the song and knew Deshawn was out of his box but he came prepared on this song; he would pick Deshawn. Shakira says that Deshawn has this unique sound to his voice, but she chooses Dani as the winner of the battle since she feels like she could do more with her. Deshawn thanks Shakira for everything and will do his best to improve; nobody decides to steal Deshawn at all and that breaks Shakira’s heart.

Next up is team Adam; his first pair is Kat Perkins and Patrick Thomson. Kat used to be a rocker but is currently a nanny and wants to prove to the kids she takes care of that dreams are possible to attain; Patrick grew up in a musical family and let a lot of great job opportunities to go for his love for music. Kat says that she was star struck seeing Aloe Black; Patrick is excited to sing “Whenever I Call You Friend”. Kat felt that Patrick has an amazing voice and that they are going in neck and neck with this song; Adam feels like their voices compliment each other really well. Adam tells Patrick to really nail his notes better and to evolve better; he doesn’t have to hold out the notes completely. Aloe says that Kat needs to open her eyes more as she performs; they are seeing too much of her eye lids. Adam says it’s hard that they are together; he believes they are the better singers in this competition.

Blake says that was really good and loves that song a lot; he felt it was an interesting pairing that worked well. Blake says that Kat had a bigger presences on this song and would pick her. Usher says that he doesn’t know the record and felt like he had to warm up to the song; Shakira likes how they both have great delivery. Adam says that he is impressed how they both applied his notes; he was really proud of Patrick to go for it completely. Adam believes this is too tough and decides he the winner of the battle is Kat. Patrick thanks Adam for challenging him and trying to give him some confidence and Shakira steals him. Shakira says she is such a sucker for his voice and mainly because he is really good.

We now see team Blake with Paula Deanna and Sisaundra Lewis; Paula got dropped from her record label and struggled a lot in the music industry. Sisaundra wants to prove to her children that any dreams can come true and was a vocal director for Cilene Dione. Sisaundra was so excited to see The Band Perry; Blake says the pairing breaks his heart and it will be epic. They are singing “Do What You Want” by Christina Aguilera and Lady Gaga; he really feels that these girls can do this song justice. The Band Perry lets them know that they have to really be strong together and shouldn’t make too many moments; Blake feels that none of them have a weakness and that they are going to make this so hard for him.

Usher says that he felt they drove each other to give amazing performances, he felt that Paula had some pitch issues in the end and that if she is going to go for it than she should just go full throttle and beleives Sisaundra has the edge. Shakira says that Sisaundra nailed the high note; reserving it for the perfect moment. Adam says that them being on Blake’s team is so weird, Blake says that he loved having them being the best at what they do; he is proud of Paula. Blake decides that Sisaundra is the winner of the battle; no one steals Paula. Blake believes Sisaundra is a strong part of his team.

Next up is the final pair Jake Barker and Stevie Jo from team Usher, Jake has a case of stage fright and was nervous to audition in front of an audience for his first time. Stevie was in a metal band but went ahead and moved on to a more soul genre. Jake was amazed to see Jill Scott and it was so unreal for him; they are singing “Higher Love” by Steve Winwood. Jill feels that Jake has a Justin Timberlake sound and he is talented; but Stevie has a passion that is just incredibly amazing. Their first run through at the final rehearsal was really bad; Usher helps them fix the way they sing the song and makes them give it a better sound.

Shakira says that they drew everyone in with their performance and commends them both for being awesome; Shakira says she would have picked Jake. Adam says it was excellent and admits that whoever doesn’t make it is on his team without a doubt; he believes that he doesn’t care who Usher takes. Blake says that he never seen a more even battle on the show; he is impressed with how Jake has such an amazing stage presence with having very little experience. Usher decides that the winner of the battle is Stevie Jo. Adam and Shakira go for the steal for Jake right away and Blake even joins in on the steal. Adam says that they were both good but felt that there was some dancing going on and mentions he did win last year; he feels like Jake and him work so well. Shakira says that Jake reminds her of Justin Timberlake; she loves her voice. Blake feels like that they have to work together to pick songs that will win them the show; Jake decides that he wants to go and join team Adam.