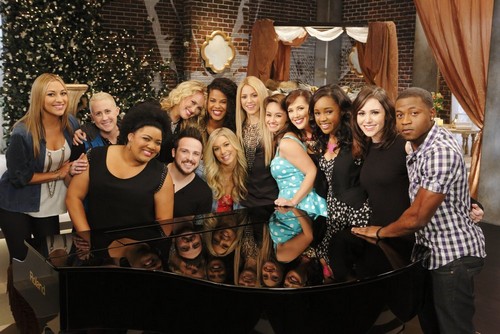 Tonight on NBC the Emmy award winning music competition THE VOICE is back with yet another round of completion. Tonight the second part of the battle round will take place with team members dueling in duets and the coaches enlisting help from star advisers Aloe Blacc, Jill Scott, Miranda Lambert and the Band Perry.

Last night it was finally time for the battle round to open with team members dueling in duets and the coaches enlisting help from star advisers Aloe Blacc, Jill Scott, Miranda Lambert and the Band Perry. Team members were pitted against one another vying for coveted positions that allow them to stay in the competition.   Did you watch last night? If not we have a detailed recap for you right here.

During the battle rounds, the coaches will pit two of their own team members against each other to sing the same song together in front of a studio audience. After the vocal battle, the coach must choose which of his/her singers will advance to the next round of competition, while the losing artist is available to be stolen by another coach. Each coach has two steals available during the battle rounds.

Tonight’s second part of the Battle is going to be just as exciting as last night’s was. It will give viewers a good idea of who may actually be in serious contention to win THE VOICE this season so you’re not going to want to miss even a minute of the fun. We’ll be live blogging it right here for you. In the meantime hit up the comments section and tell us your thoughts on part one of the Battle!

RECAP: First up are Clarissa Serna and Jeremy Briggs from team Shakira; Clarissa is hoping that her success on The Voice will impress the girls she is mentoring. To be someone they can look up to and she even got all four coaches to turn. Jeremy has been waiting to make an attempt at a career in music for a long time now; he only turned two chairs. Clarissa and Jeremy were paired since they are rockers; Miranda feels like Clarissa was holding back a lot at times. Shakira and Miranda feel like they have to hold out notes longer; they need to find their chemistry. Clarissa and Jeremy are singing “Cold As Ice”.

Adam says the end was very strong and powerful; though Clarissa has a bigger voice. Blake says that Jeremy was singing it in the same key as Clarissa the whole time; though she is a power house and would choose Clarissa. Usher felt that Jeremy had a lot of confidence to take on such a song with Clarissa; he chooses Jeremy for his tanacity. Shakira feels that Jeremy fell out of the pocket a bit and that Clarissa was too dramatic; Shakira felt they both sounded good together. Shakira decides the winner of the battle is Clarissa. Jeremy thanks Shakira for giving the opportunity to learn and try to get better at what he loves.

Next up is team Adam with Delvin Choice and Caleb Elder, Caleb came to the voice so he could leave his job at a doughnut shop and was the last person Adam decided to have fill his team. Delvin returned to The Voice hoping to get on the show this year; Adam believed he could not recognize his voice that it got that better. Adam chose the song “A Man” by Aloe Blac himself. Delvin says it’s scary yet motivating to do the song for him; Adam says that both of them are so different and likes Delvin’s power and Caleb’s emotion is great in his voice. Aloe felt disappointed at the last rehearsal and Adam believes it wasn’t good at all; Adam makes the two of them instead rap out the lyrics instead to get the rythim of the lyrics. Adam wants them to now sing it after that, so that they know how to flow with the song.

Blake says that they were having up there and knew they had problems; Blake believes that Delvin was much better. Usher says that Delvin’s voice hitting the high notes was nice; Caleb though does have promise. Shakira says that she loved how fun the performance was; she believes she would pick Delvin. Adam says that when they started it was horrible and that it sounded much better at this point, he likes Caleb’s quality that should mature but he is special. Adam says that Delvin has a lot of voice; Adam decides the winner of the battle is Delvin. Caleb thanks Adam for ever turning around for him and will go home happy; Caleb loved being able to work with Adam and Aloe.

Next up is team Usher with Brittnee Camelle and Melissa Jiminez; Brittnee’s powerful voice got two chairs to turn for her. Melissa used to perform with her fathers band but wants to be a solo artist much more and she also turned two chairs. Brittnee was so amazed to see Jill Scott, Usher chose “Give It To Me Right”. Usher feels like that this song will show who has the more power, hoping to see who can be better; Usher loves their first attempt but feels like they are holding back a bit. At their final rehearsal; Jill felt that Brittnee made great improvements. Usher feels like they have to show that one of them put in more work to impress him.

Shakira thought it was awesome; she loved the sass and the moves they had, it was smoky hot. Adam says it was an amazing battle, he felt that the high note was just amazing from Melissa but Brittnee had a stronger voice. Blake says that this battle pairing was smart, he was with Brittnee the whole time but Melissa’s last high note won it for him. Usher says that he thinks they both shined really well; he loved Melissa’s bigger notes and enjoyed Brittnee’s control. Usher decides the winner of the battle is Melissa. Adam and SHakira go to steal Brittnee; Adam says that when she sang it was powerful and that she has so much potential. Shakira says that she has an impressive voice and move so well on stage; she would love to have her on her team. Brittnee decides she wants to join team Adam.