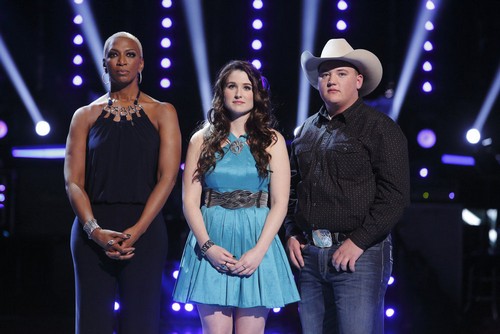 Tonight on NBC the Emmy award winning music competition The Voice is back with yet another round of completion.  Tonight “The playoffs Continues.”  This round will determine who will go on to the live shows, and who will go home.

On last night’s episode Host Carson Daly explained the playoff rounds, and it was really simple: the five members of each team performed a song of their choosing, and afterwards the team’s coach picked three singers to move on to the live rounds. No duet partners to share the burden, no steals by another coach. Lay an egg onstage and they were heading home.  All five members of Team Blake took their turn.  By the end of the evening Team Blake was set: Sisaundra Lewis, Audra McLaughlin and Jake Worthington.  Did you watch the episode?  We did and we recapped it here for you.

On tonight’s episode The Playoff’s continue as Team Shakira and Team Usher perform in front of coaches Adam Levine, Blake Shelton, Shakira and Usher. Artists will perform and the coaches will eliminate two artists from their respective teams. The remaining performers will move on to the final phase of the competition, the Live Shows, as part of the Top 12.

Tonight’s Playoffs are going to be just as exciting as last week’s were. It will give viewers a good idea of who may actually be in serious contention to win THE VOICE this season so you’re not going to want to miss even a minute of the fun. We’ll be blogging it right here for you. In the meantime hit up the comments section and tell us your thoughts on the Playoffs!

RECAP: First up is Kristen Merlin and she started out performing in small bars and she feels that when she did her blind audition it felt like she just forgot everything; it was like she just let loose. She chose the song by Carrie Underwood called “Two Black Cadillacs”, Kristen feels like she has to give a performance not too crazy and control herself.

Adam says that Kristen really just became a serious contender and hears so much of Shakira’s coaching in her voice; he believes she is at the top of her game giving one of the best performances. Blake says it was his favorite performance from her and a flawless one at that; believing the audience had the worst rythim he’s ever heard. Usher says she has one of the most consistant and strongest voices in the competition. Shakira loves how in control Kriten was with her performance; her voice and stage presence were amazing.

Next up is Deja Hall and grew up in a military family; having to move so much and music was all she really had. She chose Shakira because she builds her confidence; Deja decided singing the song “Battlefield” by Jordan Sparks. Shakira believes she’s a great girl but needs to be more confident; she knows Deja can be a star.

Blake says that went from adorable to teenager to a young woman; he really liked how she came out of her shell more and it really gave her a bigger presence.Usher says that she completely morphed into a young adult and has seen her grow; though she over sang the track because of her powerful voice. Adam says that she is really starting to control her voice and feels like it was her best yet, she is growing very well. Shakira says she was terrific and loves her growth; she has a lot of talent that still has more to go. Though she is most happy that she was confident, it makes her so proud of Deja.

Next up is Tess Boyer, before The Voice she was a cheerleader and going to school; she was nervous in her auditions but was glad to be stolen a second time by Shakira. Tess chose “Human” by Christina Perry; she feels like she wants Tess to smile as she sings at points. Shakira believes she is amazing and gives her goosebumps.

Adam says that it was one of the best performances they have ever seen, he believes she could win this and loves her low register with her high notes and power. He calls Usher and Blake morons to give her up, Blake calls him an idiot for never having her on his team. Usher says that she has a genuine quality with her voice and won him over right at the first time she said human. Blake says that Adam has contributed nothing and admires how Tess takes a challenge head on. Shakira says that she is so fortunate to have her on her team; she believes when she started out her voice filled the room but her high note just made the performance even better.

Next up is Patrick Thomson and his music ability is influenced from his family; he had a very musical family. He will be singing “Trouble” by Ray LaMontagne; it’s a song that truly speaks to him. Shakira says he has to convince people as if he wrote the song, as if he feels and truly connects to the song.

Adam says he has dreamed about singing high notes like his and loved how his song choice really complimented his voice; he is very proud of him. Usher says that it didn’t really understand who Patrick was till now and was impressed with his command of the stage. Blake says thank you for making Adam look so dumb for letting him go, he loves the raspy sound of his voice. Shakira says that every artist has there moment where America sees their potential and this was Patrick’s she loved his command of the stage and his voice was right on the money.

Next up is Dani Moz and before her audition she was holding down a steady job in PR but wants music to be her full time job; she was so happy to be picked by Shakira. Dani is singing “The Age of Glory”, she has to really be in the moment and sing like it’s her last.

Adam says that the emotions she showed were so well and loved how she was using the piano; she was nervous at first and believe she really got into it though. Blake loved how connected she was in the song and believes that she was such a big surprise with her great performance. Usher says that she is an extremely passionate, it wasn’t flawless because there was some roughness though her emotion really brought him into it.Shakira says that she looked like a true artist, she really listened to the lyrics because of how perfect she delivered the emotions through the song.

First up for team Adam is Delvin Choice, he failed in season 5 but really impressed the judges with his comeback this season; Adam feels like he is one of the biggest improvements to have ever come back to the show. Delvin decided he is singing “Lets Stay Together” by Al Green; Adam felt his pitch was a little flat at points and needs to really make his voice more dynamic.

Blake says that Delvin went leaps and bounds; he feels like that with Delvin’s hair change has made him evolve into such an amazing singer. Usher says there is not a more unique voice, he really feels that Delvin can approach any genre. Shakira says it was delicious and took them on a ride; he perfectly drove the whole thing and loved it.Adam says it’s amazing no one turned around for him his first time auditioning on the show; Adam says that he has been a big improvement and knows that his team is the team to beat.

Next up is Jake Barker, he worked at a bar and never sang on stage before till The Voice; he chose the song “She’ll Be Loved” by Maroon 5. He feels like it’s crazy with how good Jake is naturally, he wants Jake to open up more with his voice so much.

Blake says he has a very strong falceto and can see how his voice has a real strong Justin Timberlake sound, Usher says he believes in Jake and his voice is really developing well; Shakira says that she never thought she’d like this song in someone elses voice and loved how he made the song his own. Adam says that it’s insane with how much he has grown from never performing on stage before; he liked how Jake made his song his own.

Next up is Kat Perkins, she was a nanny for 5 children but is now focusing all of her time on music; she is so happy to have gone this far. Kat chose the song “Open Arms” by Journey and connects to this song so much, Adam says it’s a tough song and loves that she is taking it head on.

Usher says she should be proud of herself and tells Adam he has a sure thing because her performance was flawless. Shakira says it was very emotional and loved how devoted she was singing; her high notes were wonderful. Blake says that song sounded as if it was her own; he can’t even make one bad thing out of the performance. Adam says that this is only the beginning of Kat and feels like there is so much with her; he literally can’t find one thing to critique.

Next up is Morgan Wallen, before his blind audition he was a landscaper and was sos happy someone turned for him; though was happy that Adam stole him. Morgan is singing “Stay” by Florida Georgia Line, he is so excited to be a part of Adam’s song. Adam says he falls off at a certain part but feels like he is naturally incredible.

Usher says it was a perfect match to be with Adam; he feels like his personal choices for him as his coach weren’t as good. Blake says that country music is a great start for every artist; he says he feels he’s got a Pearl Jam voice. HE feels like his voice really works and had picked up on Morgan before. Shakira says that his problems of the past have been improved so much better and is surprised. Adam says that he Morga nworked hard on his own for this and that Blake really meant about his real deal country sound. Adam says he was unaware how good he is and knows Morgan is born with the talent that people love.

Next up is Christina Grimmie and is very popular on YouTube before trying out for The Voice; she has learnt so much from Adam. Christina is singing “I Won’t Give Up” by Jason Mraz; Adam tells her to make a plan before her performance because that is when she does her best.

Blake says that he looked over to Adam telling him she was the best singer on his team; he has no idea how a small body can have such a big voice. Usher says she is a ball of fire; he was surprised that there was no flaws it’s like she is a baby Celine Dion. Shakira says she was so great and perfect; it was nice to hear this song sang by a female artist and loved her falcetos. Adam said it was an excellent choice of song and loves to see the artist she truly is tonight. He is glad to see how she did everything well and feels it’s only the beginning.