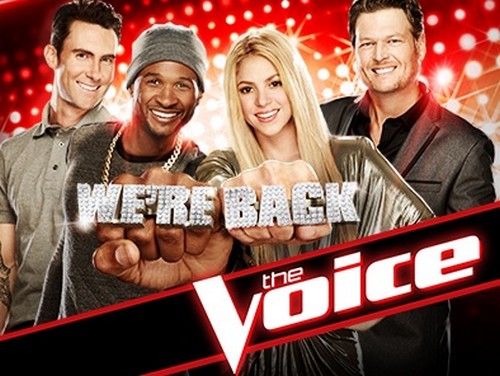 Tonight on NBC the Emmy award winning music competition The Voice is back with yet another round of completion.  Tonight “The playoff” round begins with the Top 20 vocalists performing.  In the Playoff Rounds, the top 20 artists will compete to secure a spot in the Live Shows. Artists will perform and the coaches will eliminate two artists from their respective teams. The remaining contestants will move on to the final phase of the competition, the Live Shows.

On last night’s episode the Battle rounds ended and with only one steal left, the stakes for the singers was just  higher.  The deeper the artists get into the competition, the tougher the competition and the more pressure they were under. You can’t hide that onstage when it’s just you and a microphone, and the coaches are all seasoned performers who will pick up on it.  At the end of last night’s episode the teams were set for the playoffs. No more steals; no more second chances. It’s win or go home for all the artists starting tomorrow night.  Did you watch last night’s episode?  We did and we have a full recap right here for you.

On tonight’s episode The top 20 artists perform in front of coaches Adam Levine, Blake Shelton, Shakira and Usher. Artists will perform and the coaches will eliminate two artists from their respective teams. The remaining performers will move on to the final phase of the competition, the Live Shows, as part of the Top 12. Carson Daly (“Last Call with Carson Daly”) hosts.

RECAP: First up tonight is Audra McLaughlin from team Blake; she mentions how when she was a little kid nobody really believed in her dream to become a singer, though she proves them wrong with making it this far into The Voice; Blake loves the sound of her voice as well and believes that she can hit some ranges that blow his mind. Audra chooses to sing the song “Broken Wing” by Martina McBride.

Adam felt like it was a really amazing performance and loves the sound of her voice on certain notes, Shakira agrees with that fact and claims that her performance was beautiful. Usher felt like this song was right up her alley and that she sang it with what look liked no effort. Blake feels like Audra is only getting better every time she performs!

Next up is Ryan Whyte Maloney from team Blake and he wasn’t always a musician, he started off as a garbage man but really wanted to pursue his dreams in music. He picked the song “Second Chance” by Shinedown, this song means a lot to him, it helped when he was struggling. Blake thought it could be difficult for Ryan, but if done right could hit it out the park.

Adam said that he was prepared to have a bro-vorce with Blake because of how great Ryan is getting, Shakira believes that Ryan has become one of the biggest surprises on The Voice with his talent. Usher felt like the performance truly defined him and that it was great. Blake said he was incredibly proud and excited for their future working together.

Next up is Madilyn Page from team Blake, she is still just a junior in high school and she has always had a passion for film; she would make these little videos at home for fun and grew a passion for song writing as well. Madilyn chose the song “Clarity” by Zedd and Blake feels like Madilyn has to show off her true potential, feeling like she is still holding back a bit.

Adam says that he wasn’t feeling it completely and that Madilyn needed to just let loose more on stage and really get into the song. Shakira said it was a very hard song and heard many moments where Madilyn actually had issues with it. Usher believes that Blake is helping her finding a different take on singing and is still developing her. Blake says that he loves her voice and how different it is compared to others; he knows that he could tell it was her if she was on the radio.

Next up we have Jake Worthington and he actually auditioned just last year for The Voice, but failed to get a chair to turn; but this season he finally made it and has been impressing the coaches so far. He also took the time to mention his girlfriend and he loves how she treats him like he was a skinny guy. Jake sings “Anywhere With You” by Jake Owen.

Adam said it looked like he was just on a ton of mountain dew because it was crazy, he loved the performance. Shakira also mentions how she loves him and believes that Jake is a true star. Usher says that he has to make the performance more believable or else nobody will believe it. Blake felt like Jake did country true justice and believed the performance was solid.

Next up is Sisaundra Lewis and she actually has a pretty impressive background having worked with Celine Dion on her tours for 5 years, but after becoming a mother she felt like she had to quit her passion for music; but recently her kids gave her the confidence to give it another try! Sisaundra is singing “New York State of Mind” by Billy Joel.

Adam says that Sisaundra can sing like crazy but wanted her to just get lost in the music more; but felt that her soul really jazzed it up. Shakira feels like Sisaundra has an amazing voice and wants to see her in the live show. Usher says he loves her voice and is just amazed that she is with Blake. Blake says that he starts rethinking coaching her because she’s just so crazy good.

Eliminated from the show was Madilyn Page and Ryan Whyte Maloney; with Sisaundrea Lewis, Audra McLauchlin and Jake Worthington moving on to the next round!