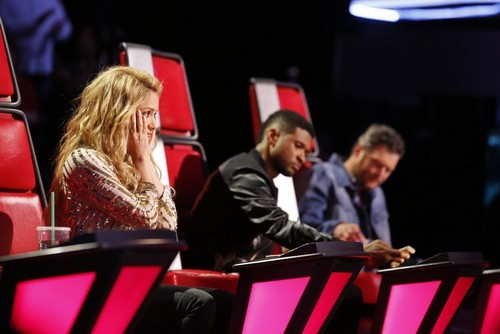 Tonight on NBC the Emmy award winning music competition The Voice will air it’s Live Top 10 Performances Show and the Top 10 contestants will perform for your vote and to make it another week.

On last week’s episode it was the premiere of the Live performances when the top twelve artists performed live in front of coaches Adam Levine, Blake Shelton, Shakira and Usher, for America’s vote.  On the results show Shakira performed, Adam and Blake sang with their teams – two artists were sent home: Dani Moz and T.J Wilkins.  Did you watch last week’s episode?  If you missed it we have a full and detailed recap, right here for you.

Tonight’s Live Top 10 Performance Show is going to be exciting. It will give viewers a good idea of who may actually be in serious contention to win THE VOICE this season so you’re not going to want to miss even a minute of the fun. We’ll be blogging it right here for you. In the meantime hit up the comments section and tell us your thoughts on the Live Top 10 Performance Show.

RECAP: First up is the UK band Rixton with their new single “Me and My Broken Heart”.

Kicking off the show tonight is team Adam bringing Graham Nash to coach his artists; Adam chose a Stevie Nicks song for Kat Perkins. Kat is a huge fan of Graham and is so excited, she is singing “Landslide”, it’s a song Kat feels like it’s telling her story of how she wants to do music for a living; it means the world to her.

Blake says that was an amazing song choice and felt like it was really refreshing for Kat to do a softer performance was really nice, Usher says that acoustic singing means more than anything; she completely executed the song and it was beautiful. Shakira says that Kat is inspired by Stevie and thought it was a great performance. Adam says that it is such a perfect song and he is so happy that they got to show it through her; he is so happy because of how perfect Kat’s singing was.

Next up is team Shakira with Tess Boyer and has Busbee with her to coach her artists Tess is going to sing “Ain’t it Fun” by Paramore; Busbee says it’s the perfect song for her because it will give a different dimension to the popstar image she has.

Adam says that she should be really happy with that and it was really well executed; he felt she was so comfortable and that the big notes were right on the money. Blake says that as a singer and wants people to try and find a part that wasn’t pitch perfect; he loved the sass and that Tess never missed a note. Usher says that he is always proud to see Tess having a wonderful performance and that it was pitch perfect. Shakira says she is so happy and that she was right in the pocket and loved the sass she portrayed on stage.

Next up is team Blake with Audra and he brought in Scott Hendrix to come help coach Audra; Blake bought his whole team new guitars. Audra is usually super nervous on stage; Audra is singing “You Lie” and the only problem she has to Scott is that she needs to really master her voice; but the talent is there.

Usher says it sucks he can’t do that and that she has an amazing voice; there brought her to a new plateau and showed off how great and entertainer she is. Shakira says Audra is going nowhere and should be in the top five this week, it was so convincing and she was impressed. AdamAdam says that he is such a big fan and believed it was her best performance; it was a world class vocal performance. Blake says that he is so proud and excited because she just made everyone pay attention to her; having an amazing moment.

Next up is team Usher with Josh Kaufman, he misses his wife and kids but they are so supportive of him being on The Voice; he wants to make a better life for his family.Usher asks about Josh’s family being so excited about his progress; Josh is singing “This is It” by Kenny Loggins; coaching him is Natural who believes that Josh has a place in the current music scene with his voice. Usher believes Josh belongs on the radio.

Shakira says that she felt the soulful renditions of songs is his sweet spot; it’s like Josh can do it all and it’s really impressive. Adam says that the more he regrets not taking Josh on his team; he is very angry because of how amazing he is. Blake says that Josh sounded like he was singing a song of his own; he then calls Adam a jackass for not keeping him. Usher says Josh’s voice is unique and his ability to be accurate is amazing; he can’t believe that he has so many great qualities in falceto like Adam.

Next up is Christina Grimmie from team Adam; Christina is singing “Hold On We’re Going Home” by Drake. Adam wants Christina to take a song no one would expect and make it into a song of her own, Graham feels like she could easily make people think she wrote it herself. Christina wants to take nothing away from the vocals while using the piano, but feels comfortable with it. Graham believes her range is insane.

Blake says that Adam got even with him; Christina did the song perfectly and felt like she was truly an artist with that performance. Usher says that an acousitc performance of a song is more impressive and the fact she made the song her own would probably make Drake proud and earn her a spot on the finals. Shakira says that was Christina’s best performance and her personality is cutting through just now; she believes Christina is unbelievable. Adam says that Christina came to Adam with the song, she wanted to do it this way and believed the choice of song was perfect; the moment gave him goosebumps and he is so proud of her.

Next up is team Blake with Jake Worthington and he wants to sing George Straight and choice the song “Run”, Jake can’t believe he got on iTunes and wished they didn’t use such an ugly picture of him. Blake feels like Jake needs to do his best on this song to impress George, but knows if he keeps his cool and does this well than there is no doubt Jake will be in the finale.

Usher says he is proud of Jake and is amazed at how he always has a great spirit. Shakira says it’s amazing how Jake never made it through the first audtiion he had for the show, but he is so far now. Adam says that Jake is a wonderful guy and knows that Jake has such an amazing way to tell a story through music. Blake says that it was a solid performance and great, he knows George would be proud of Jake; believing that Jake just has such an amazing personality that people just fall in love with.

Next up is team Usher with Bria Kelly and she feels like she is livin the dream; she is so happy to make so many friends with people on the show. Usher feels like Bria has to show who she is through her music; Bria is singing “I’m With You” by Avril Lavigne and it was one of her most emotional songs. Bria feels like it’s weird to let her guard down, Natural says she has to be more vulnerable in the song.

Shakira says that she loved the song and it allowed Bria to challenge herself to a whole different level.Adam says that he is a huge fan of Bria and thinks she is one of his favorite and didn’t totally feel that she was connected to this song; he feels like moving on he wants to see more about the things he likes of her. She did good but there is more too see. Blake says that he will be interested to hear what Usher has to say, it was like a different artist up there tonight; it was very different from what they are used to. Usher feels like Bria is growing and introduced the song very soft and said that she loved her different approach.

Next up is team Adam with Delvin Choice, Adam mentions how Graham was very important to him and helped him get through the hard times of his music career; Delvin is singing “Bright Lights” by Gary Clark Jr. Adam says that Delvin needs to transform the song, Graham says he has great talent.

Blake says that Delvin keeps taking it to the next level and there is a reason he is going to stay here for so long; his talent is unbelievable. Usher says that his performance really has a soulful feel that bring gospel into it. Adam says they took a risk to use the audience and believes it was one of the most electric endings of any song.

Next up is Kriten Merlin and her mic cut out last week which really freaked her out, her father was so happy to see her move on; Kristen is singing “Let Her Go” by Passanger. Shakira says she has to be more convincing with the song, making the emotions come out stronger.

Adam says he is so happy the mic was on the whole time, he felt it was that it’s the same from her all the time; always really good. Blake says that when he saw her doing this song that wasn’t country her felt worried but it was one of his favorite performance from her. Shakira says Kristen is a true artists and has grown so much, she’s got so many layers.

Last up tonight is team Blake’s Sisaundra Lewis, she feels that the pressure is crazy and whenever she has the chance she tells her kids to call her and that she loves them. Blake gives Sisaundra the song “Oh Sherrie” by Steve Perry, Scott tells Sisaundra to put more rock in her voice singing this song; take it to another level and surprise people.

Usher says that she gave an incredible performance and it was a worthy risk; Blake says that Sisaundra sang the crap out of that song and makes him look so smart. Adam says that is truly a rare thing to do.