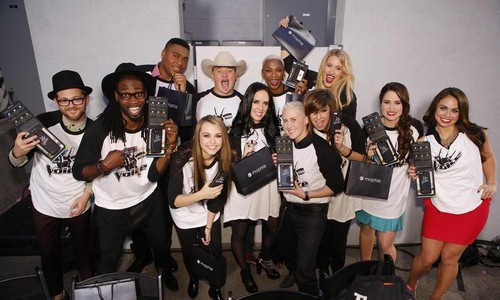 Tonight on NBC the Emmy award winning music competition The Voice will be beginning it’s live show performances and the Top 12 contestants will perform for your vote and to make it another week.

On last week’s episode The Playoff’s ended as Team Usher artists performed in front of coaches Adam Levine, Blake Shelton and Shakira. Artists will perform and the coaches eliminated two artists from their respective teams. Usher made his choices.  Did you watch last week’s episode?  We did and we have a recap right here for your enjoyment.

Tonight’s Live Show Premier is going to be just as exciting. It will give viewers a good idea of who may actually be in serious contention to win THE VOICE this season so you’re not going to want to miss even a minute of the fun. We’ll be blogging it right here for you. In the meantime hit up the comments section and tell us your thoughts on the Live Show Premiere.

RECAP: First up tonight is Bria Kelly and Usher says he’s happy to see her with a guitar; he believes that her song is pretty modern. Bria Kelly is singing “Rolling in the Deep” by Adele, Usher feels like she can’t be human with how long she holds a note but believes she needs to stretch out her words a little more; the moment he heard Kelly he knew she was a diamond.

Shakira says that she felt that the song is truly a challenge and knew that if anyone can do it then it would be Bria; Shakira says she has over come a lot. Adam says that it was a tall order and believed that there were things that he would have loved to hear higher at some parts; though he liked the different take on it. Blake says that he love the rock edge approach to the song, he really loved the note. Usher says that it is brave to step in to the shadows of incredible artists and felt like this was a good stab at a familiar song; he feels like Bria showcased herself and that she killed it.

Next up is Delvin Choice and is singing “Unchained Melody” by The Righteous Brothers; Adam believes Delvin has to sing this song as if he’s dying and needs to really exploit the emotional feeling. Delvin decides to dedicate the song to his mother and father since their anniversary is coming up soon.

Blake says that it was a great job and felt last week that when he let his hair down he becomes a better singer, but this week it’s up but he sang the crap out of that song. Usher says that Delvin is a threat and that with a song like that it’s about showing off the pain; then he made it sound really happier. Shakria says the command of Delvin’s presence on stage and his voice really made her enjoy his performance completely. Adam says that when he brought this song to his attention he wanted Delvin to build to a moment, he got goosebumps seeing Delvin serenade the audience member.

Next up is Dani Moz and Shakria believes her last performance was an amazing moment and has her singing, “Just Give Me a Reason” by PINK and wants Dani to give it her own style; Dani feel comfortable with pop music and believes Shakira is the best coach for her.

Adam says that the hardest thing about that song is because it has no breath, he was so impressed how she did such a fantastic job; though the only thing that bothered him was that the song was too powerful. Blake says that her high note just changed everything; it really made her moment and thinks Adam is so wrong. Shakira says that Dani was perfect and so heartfelt; she loved how Dani hit some crazy high notes.

Next up is Audra McLaughlin, Blake feels like she has an amazingly different voice and she will be singing “Angel of the Morning” by Juice Newton; Blake feels like it’s a perfect song for her to sing and knows she will just perform it amazingly.

Usher says that it was incredibly and that her powerful voice has so much character; he is amazed how Audra holds a note for almost forever. Adam says that Blake can’t hold notes long like Audra and pees his pants with it, Adam feels like it she is always fantastic and is a big fan. Blake says that he knows how Audra has been going to school but feels like she has no need for it because he is so confident in her future within music and is happy to work with her.

Next up is T.J. Wilkins and Usher loves the song he chose, “Waiting on the World to Change” by John Mayer; he really wants to be part of several different genres. T.J. admits having studied Usher a lot; Usher loves the fact that T.J. works hard to be an original artist and knows he will kill it.

Shakira says that she is his cheerleader and is always rooting for him; she feels like he is so pure and adores his voice. Blake says that it’s hard to not vote for that performance, he knows he has something very appealing to him. Usher says that he was glad to see a different side of T.J. and believes he is an incredibly artist.

Next up it is Christina Grimmie and Adam feels like Christina plays to her competition and she is singing “Dark Horse” by Katy Perry. Adam feels like she has the ability to become a huge pop star, Christina loves pop and feels it’s a big part of her; Adam tells her to make her high notes longer and be more softer with it.

Blake says that Christina is proof that dynamite comes in small packages and feels like it’s impossible how much sound comes out of such a tiny human being; though feels like she is the artist to beat on Adam’s team. Shakira says she wondered how Christina would tackle this song and feels like she nailed it. Adam says that he is more and more impressed by how capable she is; as her coach it felt it was her own song because of how great she was. Usher says it was perfect and believes she is the best singer on his team.

Next up is Sisaundra Lewis, Blake says that she captures peoples attention and feels like the skies the limit for her. Sisaundra is singing “Don’t Let the Sun Come Down on Me” by Elton John, Sisaundra knows she has to be even better this chance and is going to give it her all.

Usher says that he doesn’t know if it gets any better than this, he feels like he was just waiting for her to kick off her shoes at one point. Adam says that it was great because Sisaundra showed some restraint and it was the most beautiful part of the performance, he felt it was so clever. Blake says he loves hearing Adam talk about her restraint and was proud that Sisaundra decided to do that on her own.

Next up is Kristen Merlin and Shakira decides for her to sing “Stay” by Sugarland and feels like Kristen can truly make a moment for herself and that needs to decide her staging; she wants Kristen to really let herself go and believes America will love her.

Adam says that it was great because it put her in a situation more scarier than anything and that’s having her mic die during the performance; he felt like she handled it so gracefully that it was like nothing happened. Blake says that it was great and keeps seeing her improve much more throughout the competition; he loves how she sounded so incredible and kicks himself for Shakira having her. Usher says that he is greatful that she choose that song, it made him feel like he was having a moment with her voice. Shakira says it was so heartfelt and moving; it just made her lost into the song and is so proud of Kristen.

Next up is Kat Perkins and thought the classic rock move was smart for her, they chose the song “Magic Man” by Heart; he really feels like she has to be very aggressive with the song. Kat feels like it’s the hardest thing she has ever done but is ready to kill it.

Blake says that she is so good, he can’t believe she was a nanny before with those rock star abilities; Usher says dealing with kids brings a lot of emotion and it had to come out. Usher felt it was really amazing and that her voice is so powerful; like she knows what she is doing. Adam says that he thinks over the past two weeks Kat has gone for some of the greatest singing ever one Earth with her song choices; he is so impressed with how much power she does it and it blows his mind.

Next up is Jake Worthington; Jake always wants to keep country music alive and wants to be the first of his kind. Blake took the song “Anymore” by Travis Trent, Blake wants him to sing the song to one person and to give every audience member the feeling that they are the person he’s singing too.

Shakira says that Jake has an appeal that keeps growing with how much he is just himself and believes every word he says, Blake says what Shakira said is the truth; he truly feels that Jake’s singing makes you feel like it’s real and he nailed it.

Next up is Tess Boyer to singing “I’ll Be There For You” by Bon Jovi, Shakira wants her to hit those notes with energy similar to how Bon Jovi does; she needs to show off her confidence and passion with her voice.

Blake says that he predicts Tess is the artist to beat on team Shakira; he was so happy to be able to coach her for the time he had with her. Usher says that he knew Tess would go this far without a doubt; she has learned so much and is becoming a powerhouse. Shakira says she is amazing and has grown so much, she feels like Tess completely nailed it.

Next up is Josh Kaufman and he is singing “Stay With Me” by Sam Smith, Usher feels like Josh has the true sound of soul in his voice; he wants him to run around a couple of laps around the stage. He wants Josh to connect with the audience more, he wants him to have a strong presence to win America’s heart.

Shakira says she is such a fan and that he is so clever to start the song so contained to knock them out with his powerful voice. Adam says that he is so stupid, he feels Usher chose an amazing song. Blake says that Josh is truly a threat on team Usher and his best singer; Usher says that he is an incredible student. He really believes Adam got him prepared and that they are both dads to him, he feels like he commanded the room perfectly; he is so proud of him.