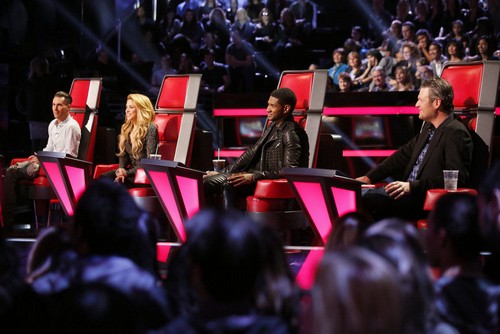 Tonight on NBC the Emmy award winning music competition The Voice is back with yet another round of completion. Tonight “The playoffs End,”  this is the final evening that will determine who will go on to the live shows, and who will go home.  The last team to be completed if Team Usher.

On last night’s episode It was night two of the playoffs, time for Team Shakira and Team Adam to take the stage to determine who goes on to the live shows and who goes home. There were no steals and no second chances.  The first person moving on to the live shows with team Adam is Christina Grimmie, the second person moving on is Delvin Choice and the last member of team Adam is Kat Perkins; Morgan Wallen and Jake Barker went home.  For Team Shakira moving to the lives hows is: Tess Boyer, Kristen Merlin and Dani Moz. We’ve got nine of the final 12 performers set.  Did you watch last night’s episode?  We did and we recapped it right here for you.

On tonight’s episode The Playoff’s end as Team Usher artists perform in front of coaches Adam Levine, Blake Shelton and Shakira. Artists will perform and the coaches will eliminate two artists from their respective teams. Usher makes his choices. Then it’s on to the live rounds, and one step closer to finding this season’s Voice.

Tonight’s Playoffs are going to be just as exciting as last week’s were. It will give viewers a good idea of who may actually be in serious contention to win THE VOICE this season so you’re not going to want to miss even a minute of the fun. We’ll be blogging it right here for you. In the meantime hit up the comments section and tell us your thoughts on the Playoffs!

RECAP:  First up for tonight is T.J. Wilkens from team Usher; Usher is a hero of his and believes he is so lucky. He is singing “Tell Me Something Good” by Rufus & Chaka Khan. Usher really likes T.J.’s spirit and believes with it he can give an amazingly soulful performance.

Shakira says that the audience loved and adored him as she did; she loves how committed he is and the high note was so good. Adam says that it was great and the song was one of his favorites; he feels like T.J. is a breath of fresh air with his entertainment value. Blake says that it was solid, when Usher chose him over Biff and realises why now because of how great he is on stage. Usher says that it’s always great to see a perfect representation of a genre he loves; he felt that he killed it. He feels like his choices will be hard tonight.

Next up is Melissa Jemeniaz and was performing in her fathers band but has always wanted to be a solo artist; she was pulled up on stage at one of Usher’s concerts and is glad to be working with him now. Melissa is singing “Halo” by Beyonce; Usher feels like she needs to control her breath and feels like her song choice is very brave.

Shakira says it was a brave move to pick this song and felt like she did great with taking this new approach. Adam says that he likes the risk she took and think there were beautiful moments but there was some trouble here and there. Blake says that it was solid but one moment he felt like she didn’t get a big enough breath for a note. Usher says that she understood about how taking risks can go either way; he likes the effort she puts and really feels like his choice is much harder.

Next up is Stevie Jo, he felt like the blind auditions was so hard because he was nervous but was glad that Usher choose him. Stevie chose the song “The Thrill is Gone” by B. B. King; Usher wants him to really pull out the feeling of heart break into his voice.

Blake loves seeing Stevie perform thinking he is sneaking up on a rabbit doing that. Adam feels like he emoted the song perfectly and loved his performance. Shakira says she loved it right at 20 seconds in, she loves seeing him always bringing something new. Usher says that he is a fan and his growth, but loves how brave he is to take such a song and deliver these emotions so well.

Bria Kelly was so happy to get four chairs in the first round and liked how Usher waited till the last second to turn for her; Bria is singing “Wild Horses” by Rolling Stones. Her father bought her a new guitar and sings this for her family, she is really happy that they support her so much.

Adam says that he is still upset Usher won her over him and feels like he was worried from her last performance; he is pleased to say she is back and did a great job. Shakira is a huge fan and loves her voice, she has no idea how she can just rasp those high notes. Blake says that he has stolen everyone she battled because he feels like Bria makes everyone step up their game. Usher feels like everyone watching at home knows it’s trial and error for her to become the performer she is meant to be, he feels like that she sang the song well and made it her own.

Last up for team Usher is Josh Kaufman and he was stolen by Usher after not being picked in his battle; he is very thankful for being stolen. Josh is singing “It Will Rain” by Bruno Mars, Usher thinks it’s a hard song but Josh has the ability to sing this song really well.

Adam says that his choice between him and Delvin was hard; though he is so relieved to see him still here and honestly hopes that he makes it too the top and loved his performance. Blake says that his wife loves Josh and believes he is one of the best singers on the show. Shakira says that Josh is probably one of her favorites and loves how effortless it was for him to hit the high notes. Usher says that he did an incredible job and feels like it was an amazing moment; he feels like he has such a hard choice tonight.

Usher’s first choice to bring to the live show with him is Bria Kelly, the second person moving on his Josh Kaufman; the last person to go on to the live show is T.J. Wilkins. Stevie Jo and Melissa Jemenaz are going home.