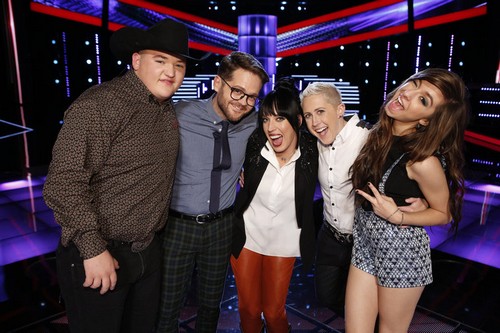 Tonight on NBC the Emmy award winning music competition The Voice continues with another new episode.  On tonight’s episode, the live semi-final performances air.  The Top 5 will lay it all on the line tonight and your vote could decide who heads to the finals and who heads home.

On last week’s episode the top eight artists performed live in front of coaches Adam Levine, Blake Shelton, Shakira and Usher for America’s vote. The 8 artists remaining in the competition were: Team Adam – Christina Grimmie, Delvin Choice and Kat Perkins. Team Blake: Audra McLaughlin, Jake Worthington and Sisaundra Lewis. Team Shakira Kristen Merlin. Team Usher: Josh Kaufman. Sisaundra Lewis.  On the results show  there was a triple elimination  and Delvin Choice, Sisaundra Lewis and Audra McLaughlin were sent home.  Did you watch last week’s episode?  If you missed it we have a full and detailed recap, right here for you.

Tonight’s Live Semi-Final Performances is going to be exciting. It will give viewers a good idea of who may actually be in serious contention to win THE VOICE this season so you’re not going to want to miss even a minute of the fun. We’ll be blogging it right here for you. In the meantime hit up the comments section and tell us your thoughts on the Live Semi-Final Performances.

RECAP: Kicking off the show is Usher with his new single called “Good Kisser”.

First up is Kristen Merlin singing for her friends and family, she used to never like country music but as she got older she actually realized how great it was; the support she has been getting from her hometown is insane and her girlfriend is super supportive of singing. Kristen is singing, “Gunpowder and Led”.

Adam says that this was another example of how far she has come, he feels there has been so much growth and that she deserves to be there. Blake says that he remembers when his wife sang that song, she sings it like she is mad killing the person; though Kristen sings it happily. Usher says that he thinks things might be a little out of order since Blake said it all; he thinks it was great. Shakira says she totally rocked the stage and is so freaking proud of her.

Next up is Josh Kaufman and he grew up in Florida, he formed a band with some friends; it’s been fun and family is the most important thing for him. He loves his wife and kids a lot; he appreciates all the crazy support he’s gotten. He’s singing “All of Me”.

Shakira says that he has such a gift to reach people with his romantic songs, she feels he always manages to deliver solid performances. Adam says that he is so stupid for having him stolen away, he really believes Usher has done such a good job coaching him. Blake says it was beautiful and powerful, there is no question that he will be in the finale. Usher says that Adam is a genius for recognize Josh’s talent and thanks him for having Josh come his way; he believes the dedication he sang with was beautiful.

Next up Kat Perkins and she is amazed she made it out of the bottom three a second time; she is so excited and happy the fans believe in her so much.Kat is singing the song “Chandelier” and Adam believes it tests her vocally so much; making it her first pop song to sing and believes she can will all of this.

Blake says that he really thinks she does everything right, every chance she gets she takes the right things to move forward. Shakira says that Kat made the song her own and loved how she didn’t try to copy the original artist too much. Adam says that Kat is hands down one of the best singers they have ever had and she has fight so hard to be in the finals.

Next up is Jake Worthington and he is dedicating the song to his friends in Texas; he grew up like a normal kid and loved taking classes on agriculture. His hometown is supporting him so much and it makes him so happy; he is truly excited to have a chance for the final three. Jake is singing, “Good Old Boys”

Usher says he loves Jake and he represents country amazingly, he knows that Blake could win with country again and Jake has completely sold him to love country. Adam says that he is as real as it gets, it’s like he needs a made in America stamp since he is so genuine; he is a massive fan of Jake. Blake says that he could not be more proud, he wants America to know that this is the guy you think he is; he needs to be a big part of country music in such a traditional way.

Next up is Christina Grimmie and Adam makes him sing the song “Hide and Seek” he wants to make Christina do songs she would never do, Adam believes this is what sets Christina apart from everyone else that she takes these risks no one else would and wants her to give the song a new twist.

Usher says that she is amazing; at first it was a little shaky for him but when she started to completely sing it really got him. Shakira says Christina is so tiny but really brings the power; she loved it. Adam says that he thinks they are sick of people doing safe things to make it through the show; Adam likes to push Christina to do more different songs that others may never try.

Next up is Josh Kaufman again, Josh says music is something he doesn’t have to force himself to do music; he loves it. Usher chose him the song “Love Runs Out”, Josh likes doing a song very current and making it his own.

Adam says that he is out of time with the loud crowd; he believes Josh is amazing. Blake says he’s got the song by the throat, he controls the stage so well; he is a natural killer singer. Usher says that his performance was amazing, he loved how he brought the audience into it and feels like they got this.

Next up is Kat Perkins, she is dedicating the song to her hometown and all her loved ones; everyone was so nice there. When she was 18 she moved to Minnesota and it brought out her inner rock, she can’t even believe how many people are supporting her. She also thanks the kids she was a nanny for, she is now singing their favorite song from Frozen called “Let it Go”.

Blake says that every time she gets on stage there is never a miss step and always feels like he’s waiting for that end note that shows off how strong her voice is. Usher says that is a very hard song to sing and everyone loves it; it was a classic performance and wanted to see a frozen castle somewhere. Shakira loves the dress and didn’t expect the pick, though she felt this song let her show another side of herself. Adam says that he has no idea what to say anymore, he believes Kat is the best vocally and believes Kat never makes a mistake.

Next up is Kristen Merlin and Shakira believes she will kill it once again, Kristen is nervous because she has a lot of choices and pressure to succeed. Kristen is going to sing, “Foolish Games”. She believes the song will compliment Kristen’s rich and powerful voice.

Blake says that is the most connected he has seen Kristen be with lyrics, she totally dumped her heart and soul into it. Usher says that this is so on Shakira, he knows Shakira is pushing her in the right direction and did an amazing job. Shakira got chills and loves how well she tells the story of the song, she feels like Kristen is so emotional.

Next up is Christina Grimmie with a tribute to her hometown in New Jersey, it’s super family orientated; she was awkward as a kid but once she got her keyboard it changed her life. Christina moved to California so she could pursue a music career, she appreciates all her friends back home and it’s so incredible. She is singing “Some Nights”.

Blake says that it’s interesting that Christina chose the song, he loved the hell out of the performance. Usher says happy birthday because of the balloons everywhere and believes this was an amazing moment for her. Shakira says it was fun and without a doubt Christina should continue doing music no matter what happens because of how talented she is. Adam says that he so proud of how Christina is doing what she loves, he believes this week had unique choices and she always blows him away.

Last singing tonight is Jake Worthington, Blake chose the song “Heaven” by Bryan Adams, Jake says he likes the choice of music because it’s a risk they need to make; Jake feels his voice was giving out a bit but knows he must push himself to sing this perfectly.