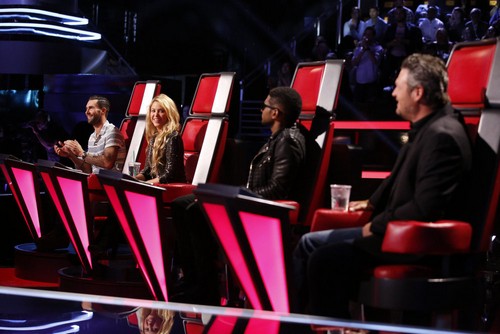 Tonight on NBC the Emmy award winning music competition The Voice will air it’s Live Top 8 Performances Show and the Top 8 contestants will perform for your vote and to make it another week.

On last week’s episode the top ten artists performed live in front of coaches Adam Levine, Blake Shelton, Shakira and Usher for America’s vote. Bria Kelly and Tess Boyer went home last week, having lost by a landslide of votes. Carson made a big announcement that Gwen Stefani and Pharell Williams will be coaches next season and will be performing tonight.  Did you watch last week’s performance episode?  If you missed it your can read a full and detailed recap, right here.

Tonight’s Live Top 8 Performance Show is going to be exciting. It will give viewers a good idea of who may actually be in serious contention to win THE VOICE this season so you’re not going to want to miss even a minute of the fun. We’ll be blogging it right here for you. In the meantime hit up the comments section and tell us your thoughts on the Live Top 8 Performance Show.

RECAP: First up is team Blake with Sisaundra Lewis, she has bonded a lot with Delvin; he’s like her little brother. She has never had her mothers visit her shows, her mother only listens to gospel music and was amazed that her mother is here for her tonight. Sisaundra is singing “River Deep Mountain High” by Tina Turner, Blake is really proud of Sisaundra singing for her mother tonight finding it a sweet story.

Usher says that it’s so good to know more about her and it’s incredible story to have her parent there; he believes that she has an amazing voice but felt like she is a diva. Shakira says that there is no doubt that her vocal ability is astonishing and that she speaks so consistently and knows that she would love to learn from her. Adam says that it’s amazing and loved the choice of song to show of how strong she is. Blake says that he is absolutely thrilled, he wants America to know that Sisaundra wanted to try all sorts of music; he is so glad she chose this song.

Next up is Josh Kaufman, Usher brought Josh the Hensen Studios; Josh is singing “I Can Make You Love Me”. He believes it’s a perfect song for Josh which will need all his emotions to be brought out from the song; Usher believes Josh has the voice to make people feel the magical moment he delivers.

Shakira says that his vocals and tons are so nice; she loved the performance and felt like it was a great accomplishment. Adam says that as much as he is stupid for not having him on his team, but enjoys seeing his success and is purely happy to see how far he has come and is really proud. Blake says that was as perfect as a performance as you can get, it had magic all over it and thinks he’ll have to figure out how to deal with him again. Usher says that Josh did amazing and felt like he came out and possessed the real talent he has to be an artist; he is truly proud to be his coach.

Next up is Blake Shelton with Gwen Sebastian singing “In My Eyes”.

Next up is team Adam with Kat Perkins, Kat wants to win and has decided to sing “Get Lucky” by Daft Punk; she wanted to do a pop song with a rock twist to it. James Valentine the guitarist for Maroon 5 was brought in because he loves the rock she does, Adam tells Kat Pharell will be there and she is nervous but ready to kill it.

Usher says that it’s clear that her performance was incredible, Shakira says that looked like so much fun and that it’s cool how Kat knows exactly the type of artist she wants to be. Adam says that once again he listened to Kat and is so impressed with her creativity and talent; he is beyond proud to have watched her perform such an amazing performance.

Next up is team Shakira with Kristen Merlin, she tells Kristen is a story teller and is super special; Kristen is singing “I Drive Your Truck”. Kristen believes it’s a song that really pulls in people who have lost a love one in the army; her dad was a soldier and finds it an important song. Shakira think Kristen is incredible but wants it to be more amazing; to take it to a whole new dynamic level.

Blake says that was a great job and knows it’s a tough song but thinks she did it so well; he is such a believer in her talent. Usher says that he is not knowledgable on country but knows she did an amazing job. Shakira says she is so moved and believes it was beautiful; she is truly proud of how she gave it her all.

Next up is Pharell singing “Come Get It Bae” his brand new single on stage.

Next up is team Adam with Delvin Choice, Delvin says that he is greatful for Adam; Delvin is singing “I Believe I Can Fly” by R. Kelly and at first he thought it was wrong. Delvin says he felt really emotional, he just really believes in himself for once in that moment; Adam tells Delvin to stay in the groove. James says that Delvin has an amazing emotional connection to the song and believes it will be great.

Blake says that it was so good and that it was a perfect song choice, he really felt the emotion from his singing. Usher says that you never see a man fly till he cries, he believes Delvin always gives a good performance and that the song was a great representation of all the contestants. Adam says that they spend a lot of time together as a team and feels that there would have never been a better song for him to sing; he knows Delvin deserves to make it to the end.

Next up is Audra McLaughlin, Blake likes working with her to get to know her more since she is so fun; he tells Audra to be more clear with the words to make the audience really get every word. Audra is singing “Forgive”.

Shakira says that it was awesome, especially enjoying her register so much; the way she held a note seemed so effortless. Blake says she is unstoppable and it’s such a great country song to see her dump her heart into it; it makes people feel what she is singing.

Next up is Gwen Stefani singing “Holla Back Girl”

Next up is Jake Worthington, he is singing the song “Hill Billy Delux”. He’s feeling under the weather because of his allergies but he’s very excited to be singing this song, it’s something a little different and more up beat.

Shakira says that she was air drumming, she like it a lot and felt the performance was more aggressive and it worked. Adam says Jake is so cool, he is so casual that it makes him cooler than Blake and loves learning about the real deal country Jake sings. Blake says Jake introduced to people his artist side of him, it’s like he just showed off an amazing side of himself.

Next up is team Adam with Christina Grimmie and is sad because her two friends on the show went home and it makes her really sad, Adam wants her to sing “How To Love” by Lil Wayne; Christina says there is so much pressure but wants to top next week. Adam says this is her sounds and needs to make it her own; she will then easily be a big success.

Blake says that it’s important to see her get that emotional, he believes Christina sounds and looks like a super star right now. Usher says there is no doubt that she has an incredible voice, but is confused about her doing some hip hop because it really suits her right now; it was a great performance. Shakira says her voice is insane and loves how she makes songs her own. Adam says thank you to Christina to do this song and loves how she can take a song and just make it sound like her own; there is no other version of that song and knows that it is beautiful.