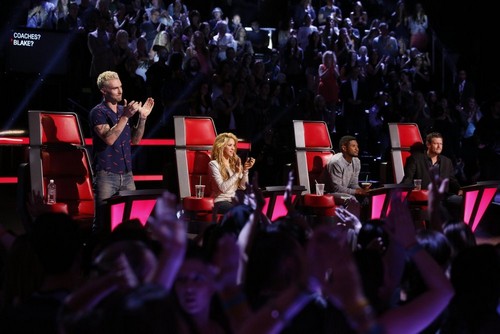 Tonight on NBC the Emmy award winning music competition The Voice continues with Part 2 of the finale episode.  On tonight’s episode, the winning vocalist is revealed and crowned “The Voice”  in the Season 6 finale.

On last night’s episode the remaining three artists performed: Josh Kaufman, Christina Grimmie and Jake Worthington performed live in front of coaches Adam Levine, Blake Shelton, Shakira and Usher. America then voted to give their favorite artist a chance to win in the finale; one artist will be one step closer to being named “The Voice.”  Each contestant performed two songs each. One of the songs was selected by contestants’ respective coaches and the other one by America via online poll.  The night also had performances by the four coaches; Adam Levine, Shakira, Blake Shelton and Usher with their remaining contestants.  Did you watch the episode?  If you missed it we have a full and detailed recap, right here for you.

On tonight’s episode in the live season finale, hosted by Carson Daly who will reveal whom America has chosen to be the winner of “The Voice.”  The show is going to be exciting and along with one singer the Voice the show will have a lineup for the night that includes, “The Voice” Season 6 (2014) Battle Round 2’s mentor Chris Martin’s band, Coldplay. This will be the first time the band will be performing on the show’s stage. They are expected to perform a single from their latest and sixth album, “Ghost Stories.” Former “Voice” mentors Ryan Tedder and Ed Sheeran will also make a comeback during “The Voice” finale. Joining Ed Sheeran and Ryan Tedder’s One Republic during the gala night is country singer Tim McGraw. Viewers can also expect watching more performances by Jake, Josh and Christina on this night too.

Tonight’s Live Season FInale is going to be exciting.  We’ll be blogging it right here for you. In the meantime hit up the comments section and tell us your thoughts on season 6 of The Voice.

Last night fans had a problem finding Josh Kaufman’s song because of a glitch so now the songs bought do not effect votes; the songs put on iTunes did not effect the votes because there was a glitch for Josh Kaufman’s song and people had a hard time finding it.but it did not even change the out come of the winner for tonight. We also get a recap of the performances we saw last night and that are being judged on for the votes tonight to see the winner of The Voice season 6. The first act tonight is One Republic singing “Love Runs Out”.

Adam says he wants Christina to know the regardless of the outcome it’s a hard competition; he knows she will get a record deal either way. Shakira says there were tons of impressive moments last night, like Jake with his new singing techniques, Josh’s energy and Christina’s crazy register. Usher says that he’d love to be a new coach to win the show, though this show is about dreams and Josh has had an amazing journey. Blake says that first off they’ll miss Shakira and Usher next season. Next up is Jake bringing back Audra, Morgan, Kat, Kristen and Ryan to sing “Summertime” by Kenny Chesney.

We see a complication of video of fans saying which coach or artist on The Voice they’d like to be part of their family; Next up is Ed Sheeran and Christina Grimmie performing together singing “All Of The Stars”.

We now see Delvin, Patrick, Stevie Jo, Morgan and Jake Barker singing “She’s Gone” by Hall and Oats; they all get a standing ovation from the coaches.

Next up is the life style of Usher, he gives a slogan of his own “Evolve or Evaporate”, “When you’re number two you’re the first loser”. His nutritional facts are that waffles and candy are the best; he also loves cheese and raw cabage. He believes Blake is a hairless Chewbacca, he believes nothing would be more amazeballs than winning The Voice. Now taking the stage is Justin Moore “Lettin’ The Night Roll”.

Now is Josh Kaufman on stage bringing back T.J., Stevie Jo and Sisaundra Lewis singing “Am I Wrong” by Envy. Next we see a complication of Shakira; Blake believes there is nothing worse than be scolded by her. Usher says you don’t mess with Shakira, while she’s talking you shut up. Shakira says it’s so hard to be right all the time; Usher says she is adorable. Now we have Ed Sheeran performing his song “Sing”.

Next up we have Deja, MJ, Dani, Tess and Madylin singing “Umbrella” by Rihanna. We now take a look at our three finalists giving their last confessional and talk about how they’d love to win The Voice. We also see how our contestants are able to pick out of three choices of cars from KIA.

Next up is Adam  and we see a complication of how he has said almost every song is one of his favorites, though Blake feels bad that Adam hasn’t really said he liked any of his songs. Next up is Josh Kaufman with Robin Thick singing “Get Her Back”.

Christina brought back, Tess, Bria and Jak Barker to sing “Team” by Lorde. We now see Blake and Jake talking with each other, it’s a complication of really weird conversations that feel so right to them; Blake feels like Jake is his younger brother and Jake feels like Blake is his uncle. We now see Coldplay performing “A Sky Full Of Stars”.

The artist in third place is Christina Grimmie, the artist in second place is Jake Worthington and the winner of The Voice is Josh Kaufman.