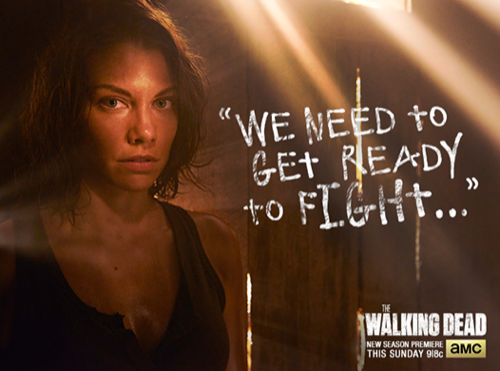 The Walking Dead returns on AMC tonight with all its gory goodness with an all new Sunday October 12, Season 5 episode 1 premiere episode called “No Sanctuary”. Tonight, Rick [Andrew Lincoln]and the group find themselves in a vulnerable situation in the Season 5 opener.

On the last season 4 finale episode, Rick came face-to-face with sheer brutality when multiple paths collided. The finale was nothing that we expected and it left us wondering what would happen next with being a cliff hanger. Did you watch the last finale episode? We did and we recapped it right here for you.

On tonight’s episode, Rick and the group find themselves in a difficult situation will they be able to get themselves out alive?

You aren’t going to want to miss any of the unfolding action tonight. We’ll be recapping the season 5 premiere live right here for you at 9pm. In the meantime, hit up the comments and tell us what you’re expecting from Season 5. Let us know how excited you are about the upcoming season premiere.

Finally the season premiere of The Walking Dead.  Tonight’s episode opens and we see the group inside of the train cart making weapons out of anything the possibly can on them, they are making brass knuckles out of belts, they are ready for a fight. The people throw a smoke grenade inside to clear the group; they are all then thrown outside and Rick is kicked in the face. They see people cutting up a human body, they are all set up against a tub and have both feet and hands tied up. A couple of random guys have their heads hit with bats and throats slit, it all drains into the tub. Bob tells them they don’t have to do this and they have a way out of all this; they just need to take a chance and that they have a guy who knows a cure. Gareth talks to Rick and threatens to stab Bob in the eye; Rick lets him know they have guns stashed nearby and makes it clear he will kill Gareth.

The people keep hearing a sound and an explosion hits. Now we see Tyreese, Carol and Judith walking on the rail road to Terminus; a walker comes out of the forrest and Tyreese says he really can’t do it htis time so Carol stabs it in the head and notices tons more coming. The two then run off trying to get away from the horde, the two hear gun fire and the zombies start walking into the direction of the sounds.

Carol and Tryeese get back onto the rail road, they assume it’s from Terminus and decide they’ll keep going. Now we see some guy near a log cabin, he is setting up some fire works; Carol walks over and points a gun to the back of his head. They mentions having a samurai chick and a young boy, Carol decides that they will go ahead to Terminus; Tyreese decides t ostay back with the guy. Carol goes out and covers herself in the blood of walkers. Tyreese talks to the guy, the guy mentions he had friends to watch football with and now they’re all dead. He tells Tyreese he’s a good guy and that’s why he will die, Tyreese gets up and the guy tells him to take a car then leave with the baby.

Carol is out walking and sneaks up to a fence, she sees Rick and the gang captured; she takes out some guns and starts looking around at the camp; she finds a propane tank which catches her eye and she shoots it. The gates are now blown open and the walkers start entering.

The guy tells Tyreese that the woman he was with must have died or he’ll be the one to get capped, Tyreese says no one has to die; the guy tells Tyreese that with that attitude he’ll die. The explosions went off and everone is down, Gareth tells his boys to sit back and look after the guys. The walkers are slowly making their way inside with Carol following them. Rick gets up and stabs the two guy who held him captive, he then frees Glenn, Daryl and Bob. Back at the train cart Carl lets them know they’ll come back safely, Michonne notices a walker outside the cart. Carol shoots a guy with a gun in the head and kills another man on top of a roof. Rick and the boys start picking up weapons and notice a room filled with severed human limbs and bodies; Rick lets them know they must kill all the people they cross because they won’t hesitate. Glenn tells Rick they must save some people, they clear the walkers and open up the shipping container. They save the guy, though he runs off and is killed by a walker instantly.

Carol walks into a room with a bunch of stuff the belonged to people who were captured; the picks up Daryl’s cross bow and takes it with her. Rick runs off and sees people with guns, Daryl saves him by killing a walker from behind; Rick waits for the guys with guns to pass. He then takes out the last one and steals his gun, Rick then guns down all the other people holding guns. Carol enters a room filled with candles, a woman tells her to drop her weapons and turn around; Carol turns then shoots at the woman. Carol then runs at the woman and tackles her down, CArol then aims the rifle at her; the woman mentions how the place was taken over by people who killed and raped. Carol asks for the people in the train cart, the woman doesn’t answer so Carol shoots her in the leg; the woman begs to have the gun aimed to her head. Carol then tells her that what they do here is sick, she then lets a bunch of walkers in on the woman. Tyreese sees the smoke and then notices a bunch of walker coming nearby; the guy in the room then takes Judith as hostage and asks Tyreese to drop his weapons. Tyreese does what he says, the guy then tells Tyreese to go out with the walkers or he will snap Judith’s neck. Tyreese goes ouside with the walkers.

The guy hears the walkers outside stop making sounds, he goes to check and Tyreese comes in slamming him on the floor; Tyreese then beats the crap out of him and puts a knife to his neck. Tyreese the just beats the guy up and knocks him out. Michonne and the others in the cart are making their weapons, they are planning to get out of cart. Abraham makes it clear he’s going to protect Eugene from anything, Eugene now starts talking about what he did and says they have  a chance to possibly change all of this. Rick opens up the train cart and lets everyone out, they all go and start running off from the walkers. The group escape and are walking in the forest, they go ahead and dig up their supplies; Rick commands that they will take out the rest of them. Nobody likes the idea at all , Carol walks over to the group and Daryl runs over to hug her; Rick walks over and can’t believe it. Carol confesses that she did all that, Carol tells them to go with her. They then find Tyreese with Judith, Rick runs over and hugs his child.

Tyreese explains how he had to kill the guy inside since he threatened to kill Judith, Rick says the place is still burning; they all decide to go and make sure it’s far away from the people. They are all now walking together and Rick decides to write on a sign that there is no sanctuary at Terminus. We now see a flash back of people in the train cart, Gareth was inside having been just like Rick’s group.

We now see Morgan find the No Sanctuary sign and then follow the marks in the forest that Rick made.