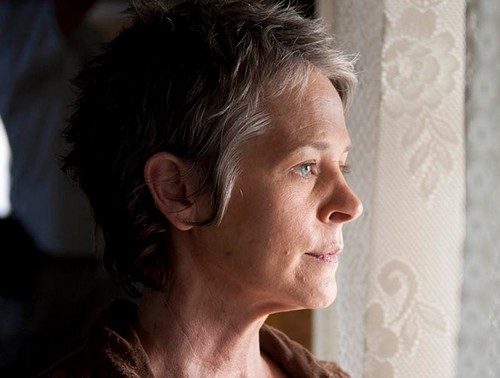 The Walking Dead is back on AMC tonight for an exciting episode called, “The Grove”. In this installment the he group finds a place to establish a new shelter together. Did you watch last week’s episode? If not then we have all of the details right here to get you caught up and ready for tonight.

On last week’s episode Daryl and Beth found a place to settle down and stay until someone kidnapped Beth. Daryl followed and then met up with the group of Men who took over the house Rick, Carl and Michonne were at. He joined the men’s group we assume because he believes they have Beth. At the end of the episode Glenn discovered the sign for the Terminus and Glenn and the rest of the people with him are headed that way. So right now everyone is headed towards The Terminus except for Beth and Daryl.

On tonight’s episode we finally get to see what happened to Tyreese, Carol, Judith and the girls.  The preview suggest Carol is in danger or maybe Tyreese.  I really hope they are not going to kill Carol off.  Some of the group gets a new shelter (we assume The Terminus) and they considering setting up their home like they had before the evil Governor destroyed their former home, the prison.

There are only three episodes left of season 4 of The Walking Dead so you aren’t going to want to miss any of the unfolding action. We’ll be recapping “The Grove” live right here for you. In the meantime, hit up the comments and tell up what you’ve thought of the season so far. Do you like how the cast has been split up for the last few episodes?

RECAP: We now see a pot of tea boiling with some weird music playing in the background; outside we see a little girl outside playing with a walker.

We now see Lizzy and Carol tells her to sleep; Lizzy says she knows that she is able to help. Lizzy asks if there will be kids at Terminus; Carol says there might be. Carol says there will be if people like Tyreese kept them safe; Lizzy says that she saved Tyreese by shooting and killing people. Lizzy asks about Carol’s kid; Carol mentions that she misses her every day. Lizzy asks if Carol would miss her, Carol says that she has to go look after her sister;since she will need help tomorrow. Lizzy hugs Carol and goes over; Tyreese is talking in his sleep. Lizzy finds some tree sap, Carol takes it on a knife and puts it on Tyreese’s wound on his arm. Tyreese questions when they will find Terminus; Carol says it could take days since they haven’t seen another sign lately. Tyreese says that Lizzy is strong but Carol mentions she has no idea what the difference between people and walkers are.

They are all walking down the railroad; Carol says she smells something like a fire burning. Carol then mentions they need water; Tyreese says he will help and she says no. She instead take Miko to go with her; there is a walker coming down thee railroad, Tyreese takes out his hammer and starts walking over to it; it falls down and Tyreese goes to smash its head. Lizzy says they don’t need to kill it.

They are all together now, Carol finds a place to stay at for a bit; they all see smoke in the air. Tyreese and Carol are going inside the house to clear, Mika and Lizzy are sitting outside and are told not to move at all.

Mika tells Lizzy they will be okay and Lizzy says the wlakers are people; a walker comes to attack them and Mika shoots it in the chest and in the head. Lizzy is scared and Carol says that she really did it. Carol asks Lizzy why she is crying; Lizzy doesn’t mentiond and walks off. Mika says she is sorry for yelling at Lizzy; Mika tells her to look at the flowers and counte them. INside the house Carol asks if Lizzy is still upset; Lizzy says she is. Mika ginds a doll in the house and gives it an awesome name that makes no sense; Tyreese says that he is just not used to being in a house whatsoever anymore. Mika says that they should live in this house; in the morning Carol is putting on some water to boil. She hears someone outside laughing and goes to see Lizzy running around with a walker; Carol tells Lizzy to get away from it and stabs it in the face. Lizzy says that it was her friend and was going to lead her away; Lizzy tells her that she doesn’t understand anything. Carol tells Lizzy to stop; Lizzy keeps yelling at her that she killed her friend.

Carol is walking in the forest with Mika and she says that the black smoke means that the house is still burning; Mika menions she loved science but hated to cut worms. Carol mentions that Lizzy is stronger but is much smarter than Lizzy; Carol finds a deer and tells Mika to shoot it. Mika can’t do it and walks away. Tyreese mentions to Carol that Mika might be right and that they can live at this house; Tyreese mentions that the kids are young and that they can take care of them together. Mika goes looking for Lizzy who is going out to the forest; Mika starts running after her and finds Lizzy feeding a walker a mouse. Mika says that the walkers are bad and that they can’t pretend anymore; Lizzy says that she can hear them. Mika tells her they want to kill her; Lizzy says they only want her to change and puts her hand near the walkers; a bunch of burning walkers come from the forest and Mika take Lizzy’s hand then starts running calling for Carol. Carol and Tyreese drop the water and chase after them; a walker grabs Mika and Carol shoots the walkers in the face; Tyreese joins in and with Carol start shooting the walkers. Lizz and Mika also pull out there gun and shoot them too; after the walkers are killed Carol hugs Lizzy.

Carol and Tyrese return to the house and find that Lizzy has a knife in her hand, blood all over it, she killed her sister with Judith beside her. Lizzy tells Carol that she will believe her now when her sister turns. Lizzy then says that she was going to do it to Judith afterwards. Lizzy pulls a gun on Carol who then tells her to hand it over, she does. Carol tells Lizzy to go with Tyreese and take Judith away. Tyreese picks up Judith and takes Lizzy with her back to the house; Carol stays behind with Mika’s corpse. Carol breaks down crying.

Tyreese is holding Judith in the house and mentions clearing out Lizzy’s room from weapons; he mentions that Lizzy has a shoe box full of mice and confirms she was feeding the walkers at the prison. Tyreese mentions finding a rabbit pulled apart and nailed to a board and that Lizzy says it was having fun; Tyreese thought she could have killed Karen and David. Carol mentions that Lizzy would have let them be walkers, Tyreese asks what to do; Carol mentions she could leave with Lizzy since she can’t be around other people. Tyreese mentions they can help her; Carol says it’s just how she is and says she should have seen it. Tyreese asks where Judith and him should go; Carol just says that Lizzy should not be around other people again. Carol takes Lizzy out and says they should pick wild flowers together for Mika when she comes back. Lizzy says that Carol knows everything and mentions she doesn’t; Lizzy gets upset and asks if Carol is mad. Lizzy says she was sorry for pointing her gun at Carol and Carol says she knows; Lizzy starts saying she is sorry again. Carol says she loves Lizzy and that everything works out the way it is supposed to; Carol tells Lizzy to look at the flowers. Carol pulls out a gun behind Lizzy’s back and Carol shoots Lizzy in the back of the head; Tyreese watches it all. Carol goes back to the house crying and there are two graves dug for Lizzy and Mika. Carol and Tyreese are alone in the house; Carol gives Tyreese the gun and tells him that she killed Karen and David. She tells him that she wanted to stop the illness from spreading and confesses that she only had good intention; she tells Tyreese to do what he must. Tyreese gets really angry and upset; he asks if Karen was scared at all. Carol says it was quick and painless; Tyreese takes the gun and Carol repeats for him to do what he must. Tyreese lets go of the gun and tells Carol that he forgives her, but he will never forget that she did it; he believes that it’s a part of her now. Tyreese once again says he forgives her, Carol thanks him; Tyreese says they don’t need to stay here and that they can’t. Tyreese and Carol leave the house with Judith; they are back on the railroad headed to Terminus.