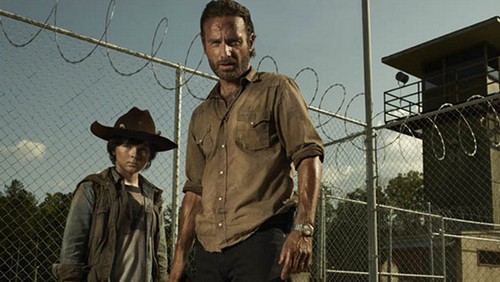 THE WALKING DEAD finally returned to AMC tonight after a long break and what a treat it was. It almost made it worth the wait, but not quite.   The mid-season premiere picked up after the governor and his crew destroyed life at the prison the former inhabitants were left homeless and separated and trying to figure out how to move on.  I cannot wait to see what happens next week’s episode.  Good news, we have have managed to get our hands on a sneak peek video and some insight for you below on what is going on next week episode, “Inmates.”

On tonight’s show Rick dealt with old wounds, members of the prison had to come to terms with their new environment and asked themselves if survival alone was enough.  Did you watch tonight’s episode?  We did and we recapped it right here for you.

Spoiler alert: If you’re one of those people who doesn’t like spoilers, stop reading now! We have some juicy spoilers for you about the season 4 episode 10 of AMC’s “The Walking Dead.”

AMC Official Synopsis: “The scattered groups begin to unite.  The group encounters obstacles in their quest for stability and safety.”  The episode was directed by Tricia Brock.

On next week’s show we will be meeting three new characters, Rosita Espinosa, Abraham Ford and Eugene Porter.  They are all characters from the comic book series.  There are suppose to be four different storylines next week but the majority of the airtime will be concentrated on Rick and Carl Grimes.

It also looks like Daryl is having trouble losing everything again.  In the preview we see Daryl and Beth Greene and she is trying to get Daryl to go and look for survivors.  She tells Daryl, “We should do something. We aren’t the only survivors.”  When Daryl refuses to move, she decides to go out on her own.

Tricia Brock who directed the episode had this to say about it, “It’s a very intimate episode. We see how these very odd groups were thrown together and how they deal with that.”

The Walking Dead Season 4, Episode 10 “Inmates” airs on AMC on February 16, 2014. Check out the preview videos from episode 8 below and let us know in the comments below what you think!