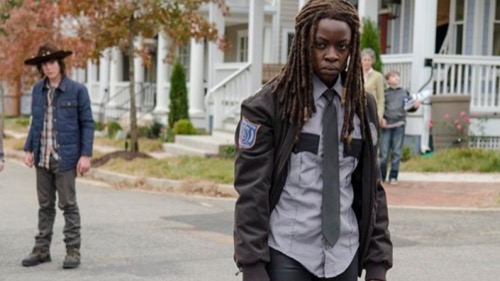 The Walking Dead season 5 spoilers dealing with plot twists and storylines are common but here we discuss Zombie evolution on TWD. It’s easy to admit that The Walking Dead has some of the most amazing and creative makeup effects on television. Who doesn’t think about that bloated well zombie when they think about gross and cool at the same time?

With that in mind, there are a few unique walkers we really need to see. So come on TWD producers, give us a few more zombies that wow us and make us remember them. After all, zombies deserve some recognition too.

We need a cowboy zombie. Really. We’ve seen redneck zombies galore, but a cowboy zombie — complete with hat and gigantic belt buckle, maybe even some chaps and a huge, bushy mustache — is something “The Walking Dead” needs.

Seriously, who doesn’t want to see a rotting corpse shuffling around wearing a tutu and ballet slippers? Oh, you know you want that one! It’s certainly plausible and since we are now at episodes taking place in the big city of Atlanta, we are certain to see a few unusual zombies roaming around. Yes, we know that Atlanta was burned by the government, but nothing is foolproof with the government. There had to have been some walkers left over.

If we’re going to have the cowboy zombie, we need to go all out. “The Walking Dead” is great at throwing in little Easter eggs here and there to see how close the viewers are paying attention, so here’s one that the producers need to create: Village People zombies…hanging out around a YMCA in Atlanta. Imagine it! The cowboy zombie along with a cop and construction worker, maybe a biker zombie too. How much fun would that be? You can bet it would almost break the Internet!

There were all sorts of things going on when the zombie apocalypse hit. You know there had to have been an upper-class party going on somewhere. There surely has to be a walker dressed in an evening gown wandering around looking for people too much. Perhaps she was at the ballet and was enjoying a little “Swan Lake” when Ballerina Zombie happened? It could happen.

You know there had to have been at least one wedding going on somewhere when the proverbial poop hit the fan. Weddings happen every day all over the world. It’s easy to believe that just as the “I do’s” were about to be said, a stray walker shuffled in amongst the unsuspecting wedding guests to crash the big event. He came for the appetizers and stayed for the main course! What was left were bridal party walkers and a zombie bride and groom. You know it happened. Let’s see it!