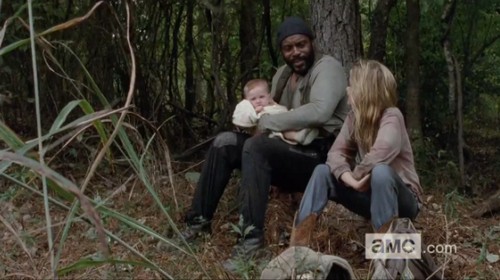 THE WALKING DEAD returned to AMC tonight and the gang is slowly heading to get back together.   Most of them are heading towards the Terminus.  I cannot wait to see what happens on next week’s episode.  Good news, we have have managed to get our hands on a sneak peek video and some insight for you below on what is going on next week episode, “The Grove.”

On tonight’s show just when Daryl and Beth found a place to settle down and stay someone kidnaps Beth.    Daryl follows and then meets up with the group of Men who took over the house Rick, Carl and Michonne were at.  He joins the men’s group we assume because he believes they have Beth.  At the end of the episode Glenn discovers the sign for the Terminus and Glenn and the rest of the people with him are headed that way.  So right now everyone is headed towards The Terminus except Beth and Daryl.  More happened!  Did you watch tonight’s episode?  We did and we recapped it right here for you.

Spoiler alert: If you’re one of those people who doesn’t like spoilers, stop reading now! We have some juicy spoilers for you about the season 4 episode 14 of AMC’s “The Walking Dead.”

AMC Official Synopsis:  “After establishing a new shelter, the group considers things returning to the way they used to be.”

On next week’s show we finally get to see what happened to Tyreese, Carol, Judith and the girls.  The preview suggest Carol is in danger or maybe Tyreese.  I really hope they are not going to kill Carol off.  Some of the group gets a new shelter (we assume The Terminus) and they considering setting up their home like they had before the evil Governor destroyed their former home, the prison.

The Walking Dead Season 4, Episode 14 “The Grove” airs on AMC on March 16, 2014. People familiar with original comic book series written by Robert Kirkman claim that the show is sticking more closely to the original story this season. Check out the preview videos from episode 13 below and let us know in the comments below what you think!