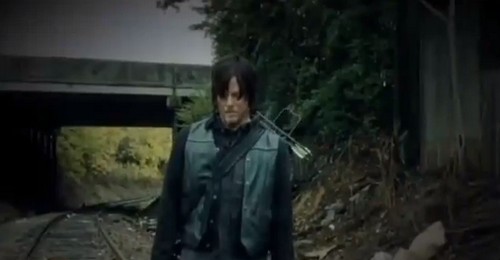 THE WALKING DEAD returned to AMC tonight and I have to say it was a disturbing episode and frankly, one I could have done without.  If you don’t want to know what happened, read NO further.  On tonight’s episode Lizzie ended up being crazier than Tyreese and Carole thought and she killed someone close to her.  As we race towards the finale, I wonder what they will follow this up with next week.  Good news, we have have managed to get our hands on a sneak peek video and some insight for you below on what is going on next week episode, “The Grove.”

On tonight’s episode we found out what Tyreese, Carol, Mika, Lizzie and Judith  have been up too.  The group were on their way to The Terminus and on the way they found a deserted house in the grove to stay at.  We found out that Lizzie was messed up, she did not understand that the Walkers were out to kill her.  She thought they were just a bit different.  At a scary point in the show she befriended a walker or so she thought and Carol killed the walker.  Lizzie had a meltdown at Carol telling her she killed her friend.  The episode went from bad to worse as Lizzie killed someone really close to her and was one step away from killing Judith before Carol and Tyreese stopped her.    We also found out that Lizzie was the one who was feeding the rats at the prison.  More happened!  Did you watch tonight’s episode?  We did and we recapped it right here for you.

Spoiler alert: If you’re one of those people who doesn’t like spoilers, stop reading now! We have some juicy spoilers for you about the season 4 episode 15 of AMC’s “The Walking Dead.”

AMC Official Synopsis: “Survivors rely on brutality and faith.  Faith becomes a survival tool for some fighting to stay alive.  However brutal some survivors believe they must be to stay alive, we get to see that faith can sometimes be the strongest survival tool.”

On next week’s episode with only two more episodes left everyone is headed to The Terminus.  In the preview for next week we hear a voice, Abraham saying, “When men like us follow rules the world becomes ours.”  Then we hear Daryl say, “aint no rules anymore.”  Daryl is headed to save Beth.  Rick is still on his way to The Terminus and so is Glenn.  Abraham is still on his mission

The Walking Dead Season 4, Episode 15 “Us” airs on AMC on March 23, 2014. People familiar with original comic book series written by Robert Kirkman claim that the show is sticking more closely to the original story this season. Check out the preview videos from episode 13 below and let us know in the comments below what you think!