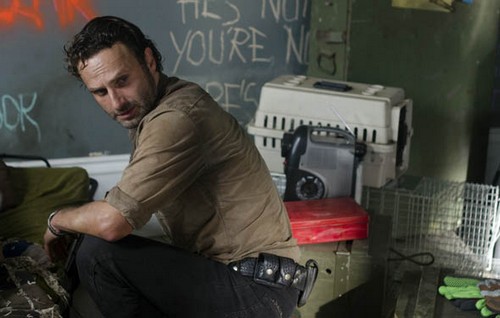 Our favorite characters on The Walking Dead might be heading into some trouble as they set up camp in the mysterious town known as Terminus. If you missed last week’s episode, then be sure to check out our recap, which you can find right here. As the season 4 finale draws near, we’re left with a question similar to the one we always ask ourselves when a WD finale approaches: Will anyone die and, if so, WHO’S IT GOING TO BE? Rick Grimes, or rather his fate, has always been the subject of much debate. Will this be Rick’s last and final season on the show? Will Rick, played by actor Andrew Lincoln, finally meet the chopping block?

There’s been much talk about Andrew Lincoln leaving the show and, while it still seems to be just a rumor, we wouldn’t be surprised if he did choose to leave before the series decides to officially end. Do you think this might be his last season? Traditionally, the actor who’s just seen his or her character die on the show appears on The Talking Dead, the talk show that appears after the WD episode airs. And guess who’s slated to appear on next week’s talk show episode? Yep, you guessed it. None other than Andrew Lincoln AKA Rick Grimes. Of course, this could just be a setup to get people talking and all abuzz about nothing, but it’s worth speculating that this might be Rick’s last hurrah.

What do you think will happen on the WD season 4 finale? Would you stop watching if they gave Rick the axe? Leave us your thoughts and opinions below. We’d love to hear from you, especially if you’re a WD superfan! Be sure to tune in for The Walking Dead season 4 finale.