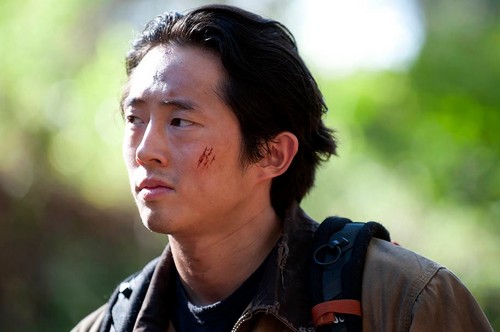 The Walking Dead is back on AMC tonight with all its gory goodness and a new episode called, “US”. In this instalment it’s the penultimate episodes and the survivors rely on brutality and faith to survive.

On last week’s episode we found out what Tyreese, Carol, Mika, Lizzie and Judith  had been up too.  The group were on their way to The Terminus and on the way they found a deserted house in the grove to stay at.  We found out that Lizzie was messed up, she did not understand that the Walkers were out to kill her.  She thought they were just a bit different.  he episode went from bad to worse as Lizzie killed someone really close to her and was one step away from killing Judith before Carol and Tyreese stopped her.    We also found out that Lizzie was the one who was feeding the rats at the prison.  Did you watch last week’s episode? If not then we have all of the details right here to get you caught up and ready for tonight.

On tonight’s episode Faith becomes a survival tool for some fighting to stay alive.  However brutal some survivors believe they must be to stay alive, we get to see that faith can sometimes be the strongest survival tool.

There are only three episodes left of season 4 of The Walking Dead so you aren’t going to want to miss any of the unfolding action. We’ll be recapping “The Grove” live right here for you. In the meantime, hit up the comments and tell up what you’ve thought of the season so far. Do you like how the cast has been split up for the last few episodes?

Glenn is walking down the railroad leading his new group; Eugene is talking to Tera about dinosaurs and video games. It’s now night and Graham sits beside Tera at a tree and she tells him to go to sleep. Graham makes it clear he is only following them till he finds a vehicle to complete his mission. Graham questions if Tera loves Glenn and believes it would be tragic helping the man she loves find his wife; Graham asks Tera about something she has done. Tera tells Graham they both have their own missions, but asks what to do when it’s over. It’s now morning, Eugene talks to Tera but she notices something in the distance; Glenn sees a sign with markings saying to go to sanctuary to find Maggie, Sasha and Bob; Glenn goes running off on his own.

We see a walker going over to Daryl and his new group; it’s face gets caught on barb wire and one of the men stab him with the bayonet on his rifle. The guys are wondering where Daryl is since he isn’t near their camp; though left his stuff there. Now we see Rick, Michonne and Carl are trying to see who can balance on the train tracks the longest; Carl wins and Michonne gives him a chocolate bar. Carl then breaks it in half and shares it with Michonne knwoing it is one of her favorites; Daryl is out in the woods and shoot a rabbit with his crossbow. Though one of the new people shot it with his bow as well and says it is his; the man says that the rabbit his whether Daryl likes it or not. Daryl tells him it isn’t his, the man says that he bets the bitch he was with messed him up and mentions it was a piece of tail he lost; the many wonders if it was a young girl. Daryl turns to go at him with a knife and Joe stops him; Joe says it’s the other guys rabbit. Daryl says he doesn’t care about their claiming; Joe says there isn’t a reason to punish him and that there was a reason why he never killed him. Joe goes to take the rabbit and instead cuts it in half and gives each man a piece of it. Joe reminds Daryl to claim the things he wants.

Glenn is rushing faster to get to sanctuary but Graham says that they are all tired and should rest where they are now; Graham mentions it’s great that Glenn wants to find Maggie but they need to rest. A walker drops out of tower and Tera falls over but says she can keep going; Glenn says that Graham and his group can stay there since he doesn’t need them. Glenn tells them to go till dawn; they continue down the rail road. Daryl is waking with Joe; Joe asks Daryl what his plan is. Daryl mentions that this place isn’t for him, Joe says that he isn’t friendly but should be with them. Daryl mentions he would be better off on his own; Daryl asks what happens if they break a rule and Joe says you’ll get a beating. Joe whistles out and lets them all know they should stop, Joe tells Daryl that if he isn’t leaving right now than he should stay with them. Joe mentions he is a cat person and that nothing is sadder than an outdoor cat thinking it’s an indoor cat.

Glenn is moving off far ahead of the group; he sees another sign and runs over to it knowing that they are closing on them. The now find a dark tunnel and Glenn wants to go through; Graham hears a bunch of walkers inside the dark tunnel and believes that he isn’t sure if they don’t make it so they should take a day to go around and play it safe. Graham believes they should split at this point, he leaves some supplies with them and gives them a flashlight for the dark. Glenn says he is sorry for hitting Graham; Graham says he isn’t because he likes to fight. Graham says that Glenn and Tara are good people; Glenn tells Tara that he knows what she is going through and says after he realise he’ll never see anyone he loved again he was numb. Tara mentions how Bryan wanted to take over the prisoner and knew it wasn’t a great idea; she can’t get over the fact of how Bryan killed Hershel. Tara says she knew that she wanted to scream no and couldn’t believe what happened.

Daryl and his group go inside of some sort of place with several cars; Joe feels like they are getting closer to something. The men start claiming stuff and Daryl basically takes what ever is left and lays down on the ground; Glenn and Tara find walkers trapped under a bunch of debris from the tunnel collapsing. Glenn sees a whole bunch of walkers split in pieces stuck waiting for them. Glenn starts to make his way through the walkers by killing all that he can; the get to the top of the debris and notice a bunch of walkers inside the tunnel.

Tara tells Glenn to turn out the light; Glenn notices that none of the walkers are Maggie and knows they made it through. Glenn says they must push through; Tara tells them they need to find another way. Graham sees a walker in one of the cars; he opens the door and closes it on the walkers and then stabs it in the head.

Glenn and Tara are slowly making there way across the walker horde; but Tara falls down and he leg gets stuck. Glenn is trying to help her out.

Abraham is sleeping in the car; Eugene is lost. Rosita asks why they stop and says that Eugene is a liar, Eugene tells Rosita that Glenn and Tara might be around where they are now. Abraham asks what they are done and is gettin really angry at Rosita; Eugene tells them to look at something. Daryl is on the floor and some guy asks him to look into his bag thinking Daryl took something of his. Joe asks if Daryl took his rabbit, Daryl says he took nothing; Daryl starts getting pissed saying that he did not take the rabbit half and that the guy planted it in his bag. Joe tells the other guy that it would be disappointing if he placed the rabbit in the bag; Joe punches the guy in the face and tells the other men beat him up. Joe says that Daryl told the truth but the other guy lied; breaking the rules leads to punishment and Joe gives Daryl the rabbit head. Glenn is trying to save Tara but can’t get her out; Tara tells Glenn to go find Maggie and leave her in there. Tara tells Glenn they are coming for her; she tells Glenn to go but Glenn turns around and starts shooting at all the walkers.After he runs out of bullets a bunch of people come inside and shoot at all the walkers; Glenn looks over into the light and sees Maggie,Sasha, Bob with Abraham, Rosit and Eugene. Glenn and Maggie kiss each other and are both so excited to see one another.

They all now take the walkers bodies and place them in a corner; Glenn introduces Tara to Maggie and Glenn mentions how he met Tara on the road and couldn’t make it without her. Maggie hugs Tara and gives her a huge; Glenn mentions that Tara willingly helped him out. Sasha is shocked figuring out how Eugene knows how to stop the out break; Abraham says they should all celebrate finding each other. Eugene mentions that they lost a few people and that their van right now is crap; he would love to go look at Terminus to see what they have there and Sasha mentions how she wants to go to Terminus first to find Tyreese and after that she will go with them to Washington. Glenn and Maggie are catching up; the two of them are now together and Maggie notices how Glenn had a picture of her sleeping. Maggiegoes to burn the picture and Glenn says it’s the only picture he has of Maggie; Maggie says he wont need a picture of her ever again and Glenn goes ahead burning it.

Daryl wakes up the next morning and notices a ton of blood on the ground; he goes out to find the man who set him up dead with an arrow in his head. Daryl is walking with Joe; Joe tells Daryl to take it slow. Joe says he believes things are falling together and that for guys like them surivival is something they have always done. Daryl notces a sign to Terminus; Joe tells Daryl it’s a lie and that the people there are not all that welcoming. One of the men find something and Daryl claims the thing on the ground; they walk right past the chocolate bar wrapper which Carl dropped. Glenn and his group reach Terminus and walk right to the gates to get inside; they unlock it and step inside. They all lower their weapons after gcoming in, they see a woman who introduces herself as Marie and says that she will help them get settled and make them some food.