The Young and The Restless Spoilers: Chloe Kidnaps Chelsie’s Baby Connor To Replace Delia – Will She Get Away

BY Amanda Austin on February 14, 2014 | Comments: 4 comments
Related : Soap Opera, The Young and the Restless 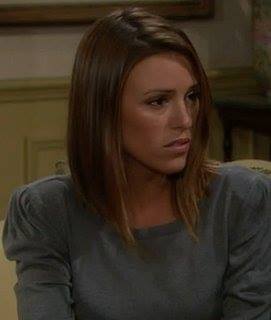 The drama boiled over on The Young and the Restless Valentine’s Day episode, and Y&R fans are still trying to wrap their heads around the latest Genoa City kidnapping scheme.

No one can imagine the pain that Chloe is enduring since she lost her daughter Delia. That kind of trauma can cause any parent to lose their mind. And, it looks like Chloe finally has. Today on The Young and the Restless the grieving mother excused herself from the benefit for her daughter Delia and headed over to Chelsie’s house, where Chelsie’s mother was babysitting her son Connor. Chloe informed Chelsie’s mother Anita that she was supposed to take over the babysitting duties until Chelsie returned, and Anita left the young baby with her. Anita had no idea that Chloe had something up her sleeve. Once Anita left, Chloe packed baby Connor up in his car-seat along with their passports, and called a taxi for the airport. Chloe is about to kidnap Connor! (She is taking her role as God Mother a little too seriously.)

There was some serious foreshadowing back in December that this might happen. Since Delia’s accident Chloe has been acting bizarrely, and this isn’t the first time that she has disappeared with Connor. Considering the fact that Chloe took the time to get Passports for her and the baby, this kidnapping scare looks like it could be the real deal.

Now, the real question is will Chloe make it to the airport and out of the country before the benefit is over and everyone realizes that Chelsie’s son Connor is missing? Chloe seems pretty serious, but maybe at the last minute she will have a change of heart and realize how wrong what she is about to do is?