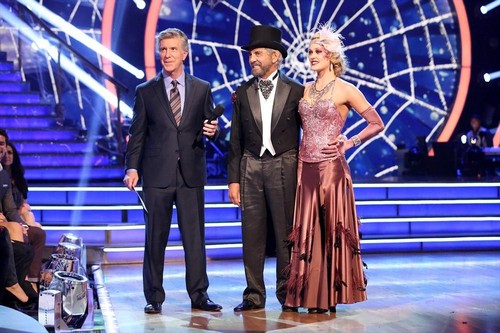 Tonight on the season 19 week 8 of Dancing with the Stars Canadian comedian, actor, writer, director, activist, and musician Tommy Chong & his partner Peta Murgatroyd danced a Paso Doble dance as Johnny and June Cash.  On tonight’s show the seven remaining couples fight for a chance ot win immunity during “Dynamic Duo” night.  The duo dance styles will include Jazz, Cha Cha, Contemporary and the Rumba. Additionally and for the first time this season, the couple with the highest overall score for the night will be granted immunity from elimination.

On last week’s episode Sadie performed a Quickstep.   The judges scored Tommy a 28/40.  If you want to see her Quickstep from last week, you can check the video out here.

Tommy Chong and professional dancer Peta Murgatroyd: dancing a Quickstep routine.  Tommy has been getting ready for his dance and tweeted, “Peta and Tommy Chong are doing Johnny Cash and June…tomorrow on DWTS on ABC vote for us please!”

Vote for Tommy Chong and professional dancer Peta Murgatroyd at voting #: 1*800*868*3413.   If you want to know what the judges said about her performance tonight head over to our nifty recap, right here.