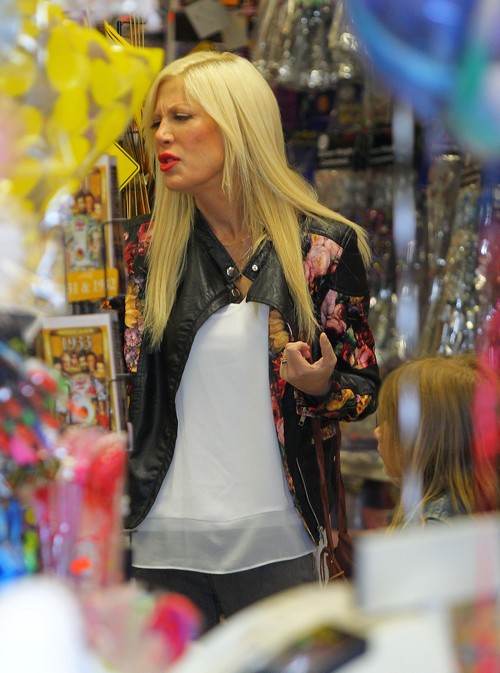 Anyone think it is suspicious that Emily Goodhand just seemed to disappear off the face of the earth almost immediately after coming forward to US Magazine about the “affair” she had with Dean McDermott, Tori Spelling’s husband? Well, you should. Granted, there are lots of cheating celebrity husbands whose mistresses stay quietly on the side. But Emily, 28, chose to come out publicly to Us Weekly in December about the affair. Normally, any mistress willing to take that step has a motive… 15 minutes of fame, and money for their exclusive story. So, why would Emily come out with this huge story, and then disappear? Because Emily was the significant piece of an elaborate plan hatched by Tori herself in an effort to get her name back in the magazines, gain some sympathy from fans, and of course… get a new TV reality show, True Tori.

Take a close look at the timing. Once you’re done with that, take note of the fact that all the “exclusive” stories that Tori has given have been with Us Magazine, who just happens to have lots of pictures of Tori looking sad and alone on the cover before she even began speaking about the affair. So, Us makes some money, Tori makes a lot of money, Tori gets a new show, and Dean gets redeemed because he is going to rehab to fight his demons and save his family. How nice…what a happy ending…it reads just like a script to a drama-filled movie.

Perhaps that is because everything has been scripted. Once you’ve taken a moment to think back to the progression of how this whole affair played out, watch some of the promos for the new show True Tori. Either she has way too much Botox, or you will agree with us that she is acting her way through this entire “tragedy” in her life. Check out her facial expressions and how she talks about the infamous affair. Clearly, she doesn’t give the feel of a genuine woman scorned by the husband she’s dedicated her life to. Once Tori and Dean’s show was cancelled, Tori claimed she was “in serious debt,” and she was forced to sell her home and ask her mom, Candy Spelling, for money.

So it seems quite suspicious that only shortly after all of her financial problems began, so did the breaking news of her husband’s affair. Having Dean admit to having a problem and taking immediate action to repair himself and his family allowed him to be seen in a better light, while Tori played the victim well looking sad and tired as she was often seen out toting the kids around back at home. A game well played by the couple… but CDLers know better and we are not buying it!

What have you noticed that seems suspicious about Dean’s alleged affair? Tell us below!

Troubled reality star Dean McDermott has a heated exchange with a photographer and grabs his arm in the process on April 23, 2014 in Los Angeles, California.