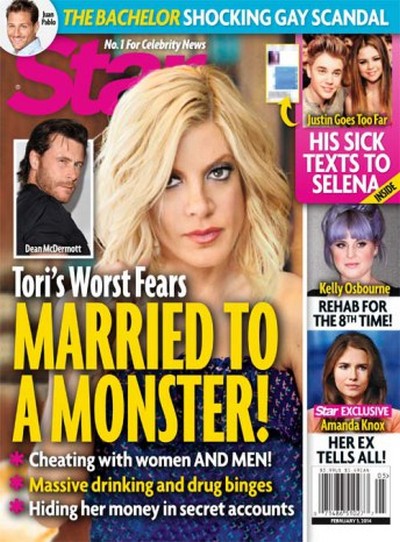 Just when Tori Spelling thought that she hit rock bottom in her 8 year marriage to Dean McDermott it seems she still needed to fall a little further down. It was first revealed last month that Dean had hooked up with a woman, Emily Goodhand, while in Canada and apparently the details of that situation prompted Tori to drop some of her non-existent cash on a private investigator. Girlfriend wanted to get to the bottom of the situation with her husband and now that she has, I’m not so sure she’s glad that she went there.

According to the Feb. 3rd print edition of Star Magazine the PI handed over proof that Dean has been burning through Tori’s money for years. Even more crushing is the fact that not only has Dean cheated with multiple women, but also men! The abundance of information that has been unearthed has left Tori finally contemplating whether or not it’s time to file for divorce. She has been juggling their kids mostly alone for the last several weeks and Tori fears that single motherhood may be the next step.

One big concern is money. Apparently in spite of beginning the marriage with a nice chunk of cash, Tori never insisted on a prenup. That means that whatever assets remain may need to be divided in half causing Tori to lose even more to Dean. While she has said they are broke, they still have quite a bit more money than the average family so there is a lot at stake. Do you think that Tori will muster up the nerve to walk away from this dirtbag? Or will she decide to keep the family together no matter how resentful she is of Dean’s behavior? Tell us your thoughts in the comments below!