Tori Spelling And Dean McDermott’s Future Uncertain After Rehab: His Betrayal Might Leave Their Family In Pieces! 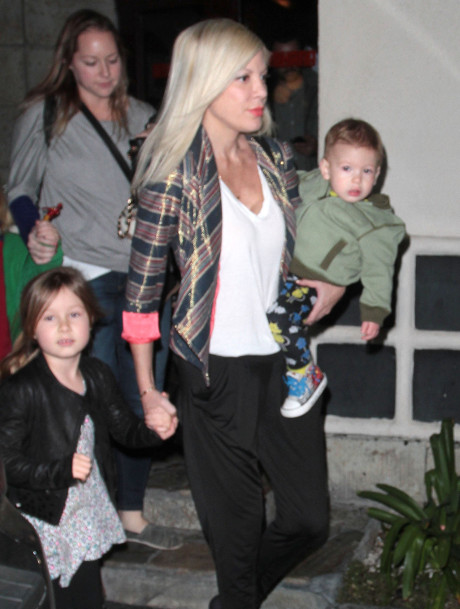 Dean McDermott is barely out of rehab for his sex addiction and already his wife, Tori Spelling, has welcomed him back into the family home — at least it’s starting to look that way. The  actor was recently spotted leaving their house and readying the car seats for what appeared to be a family excursion; however, there was no wifey by his side. Apparently, the only female willing to spend time with him right now is one of his daughters — the five year old Stella!

Perhaps Tori’s absence had something to do with what Us Magazine is calling Tori’s indecision. According to the mag, “Spelling, 40, meanwhile is still undecided about the future of her marriage following her husband’s betrayal. The Beverly Hills, 90210 alum wants to avoid “ripping her family apart” and is currently “trying to decide what’s best,” a pal recently told Us.”

Though, Dean shouldn’t be upset by this news. He did, after all, admit to cheating on her, and I’m not trying to be rude, but he’s lucky he made it past the front door in the first place. Plus, Tori also might be a bit mad in light of the fact they were supposed to have moved on to a bigger home, but due to the high cost of his rehab they had to downgrade. Is Tori Spelling wavering back and forth, teetering toward the possibility of finally calling it quits with Dean?

There’s nothing wrong in making her children her number one priority (and making sure they have their father figure around), but soon she’s going to have to start thinking about what’s best for herself. Dean has made more than his fair share of mistakes. And any sane woman would call them insurmountable! Is Tori up for a round 2? She could definitely give things another go . . . but what are the odds of Dean cheating again and leaving his family in pieces?