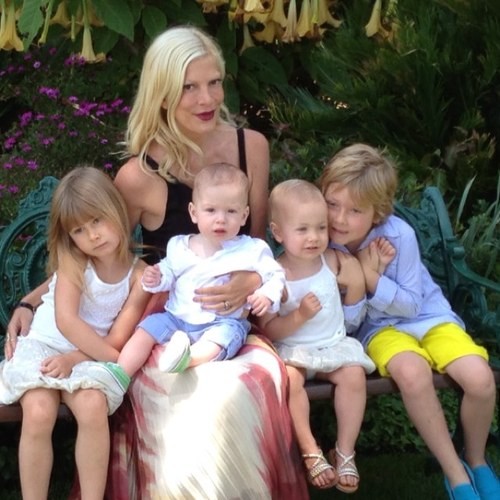 Finding out that her husband very likely had an affair before Christmas has all but crushed Tori Spelling. Gone are the weekly photos of her happy family meeting up with the paps for a staged photo shoot. In fact Tori has recently sent a clear cut screw you kind of message to Dean McDermott by changing her profile photo on social networking sites to one of her, alone with their 4 kids. According to the Jan. 27th print edition of Star magazine the actress has agreed to go to couples therapy with Dean but at the same time she is getting ready for life alone with her kids.

Supposedly, after Tori and Dean had the mother of all fights she insisted that she is to know where he is at all times. That demand was greeted with a full down meltdown by Dean who flat out refused to be policed by his wife the same way that she tracks their kids.

Things got so bad that Dean is currently crashing with a friend and supposedly his lifestyle now resembles that of a frat boy. Needless to say, Dean is really enjoying his freedom while Tori settles into the idea of being left on her own to raise the kids. Of course sources close to her say that she isn’t coping well at all. After being pegged as the other woman when she first hooked up with Dean, she always knew exactly what he was capable of and what she has always feared would happen. Would Tori be better off to move on with out the serial cheater? Tell us your thoughts in the comments below!