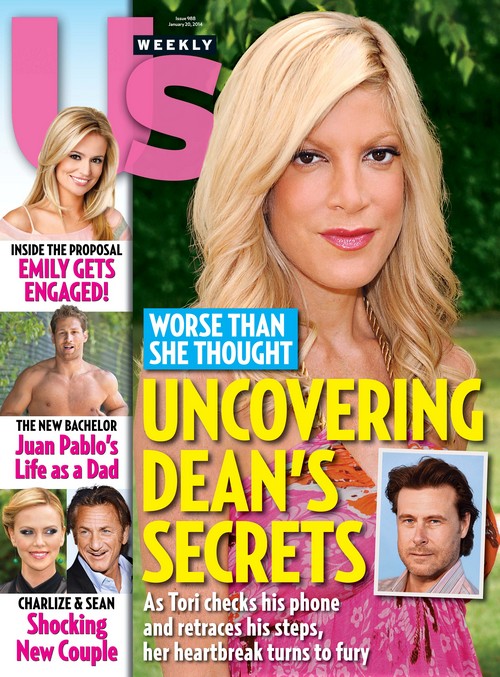 The latest cover issue of US Weekly focuses on Tori Spelling‘s investigations into Dean McDermott‘s cheating allegations, and the shocking revelations she’s uncovered since the rumors first came to light.

Tori has reportedly taken to retracing Dean’s steps and checking his phone, and she has now found more evidence of cheating and mistresses than even she thought possible. The report makes it seem as though Tori’s just now realizing that Dean’s always been cheating on her, but how clueless do you have to be to know that?

No, it’s obvious that Tori’s always known, but she’s turned a blind eye to the whole situation because being happily married to Dean benefited her. Alas, now that the public has found out the truth, she can’t really turn a blind eye anymore, can she? Now, she has to play the card of the jilted wife, and take advantage of the inherent goodwill of someone that gets cheated on and publicly humiliated. I wouldn’t be surprised if she parlays this into a new reality show somehow.

US Weekly also has a story on Bachelor Juan Pablo‘s life as a father. They’re really milking the dad thing for all it’s worth, aren’t they? Well, it does help with the ladies, that’s for sure.

Finally, who was surprised at Charlize Theron and Sean Penn getting together? They’ve been friends for years, but it looks like Charlize’s taste in men isn’t as good as her taste in movies. First Seth MacFarlane, and now Sean Penn? Both talented, but both rumored to be douchebags. But hey, maybe there’s something there we’re not seeing.