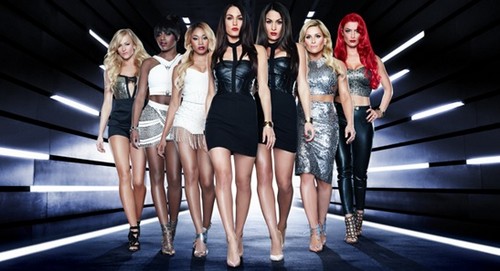 Tonight on E! TOTAL DIVAS continues with a whole new episode called, “The Braniel Bus.”  On tonight’s second episode Brie convinces Daniel Bryan to get a tour bus; Eva Marie is embarrassed when her past is exposed, and Nikki loses a tooth in a match.

The Show reveals the real women behind the WWE Divas for the first time, this new one-hour series proves that the drama is even bigger when the sexy superstars step outside the ring.  “Total Divas” goes inside the personal lives of these glitzy, glamorous celebrities who entertain sold-out crowds in arenas around the world and are adored by millions of fans.

On last week’s season two premiere Nikki faced life without John Cena as her boyfriend; Summer Rae debuted on the main roster; and Eva Marie dealst with her parents’ reaction to her elopement.  Did you watch last week’s premiere episode?  We did and we have a full and detailed recap, right here for you.

On tonight’s episode with convincing from Brie, Daniel Bryan decides to get a tour bus; Eva Marie’s past comes back to embarrass her; and Nikki loses a tooth in a match.

Tonight’s Season two Episode 2 of Total Diva’s is sure to be great, especially since we were left hanging by just about every cast member! Tune in at 9PM EST to E! and we will also be recapping the episode right here for you! In the meantime, should Nikki stay with John and give up her dream of having a family in favor of his admitted selfish lifestyle? Tell us your thoughts in the comments below!

Tonight’s episode opens with John opening up his heart to Nikki and admitting he’s been selfish. He tells her he is in love with her. She is scared but still loves him. She was hoping for a proposal but it didn’t happen.

After Nikki gives Brie a tour of John’s massive, hooked-up bus, she gets the idea to tell Brian that he should get a bus for them for the upcoming tour they have. A little later, the girls all meet for lunch to catch up. Nikkie, Brie, Eva Marie, Nattie, and Naomi are catching up when Brie brings up her bus idea. When she talked to Brian about it, he told her they could not afford to have the bus for the two of them, so she tells him they can have the girls join as well to help with the cost. He relents and Brie tries talking everyone into it. Everyone seems to be okay with the idea, but Nattie doesn’t really want to be stuck with Summer. Just then Summer walks in and tells Eva Marie she has all her stuff so she needs to come with her.

In the car, Eva Marie shares with Summer what the girls talked about and what Nattie said about her as well. The girls commit to having each other’s backs. Later, at the arena, Evan Marie shares with Nattie and Ariane that she gets to go to Afghanistan-she was chosen to represent WWE and Nattie and Ariane think that she wasn’t very humble..she was bragging about it to them and they weren’t too happy. The girls watch Nikki and Brie in a match that got a little rough, leaving Nikki with a bloody mouth and a lost tooth.

The ladies are ready to embark on their trip and begin to load the bus. Nikki comes on the bus with the group since she doesn’t want John to see her with her missing tooth. The grous starts playing truth or dare and Summer continues to irritate Nattie with every comment and what Nattie considers her little “act.” Later, Ariane is still bitter about the way Eva Marie bragged about being chosen for the Afghanistan trip. She brings out some pictures she found online of Eva Marie that show she’s got a bit of a past. She shows Nattie and Brie. Later, she shows Sandra and it is not long before everyone knows about it and keeps passing it on to more and more people. When Summer finally sees it she pledges to tell Eva Marie because she doesn’t want this going around about her friend without her knowing.

The Bella twins get a little revenge during another match where they meet up with the girl who knocked Nikki’s tooth out. Shortly after, John sees Nikki by the bus and after hiding it as much as possible, she finally fesses up and shows him her missing tooth. They laugh it off. Back on the bus, Summer takes Eva Marie aside and tells her about the pics that Ariane has been spreading. Eva Marie comes back out and confronts Ariane. Ariane is taken aback that Eva Marie found out and rumbles off some lame excuses for showing them, explaining that they were available online and maybe she should have thought about what she was doing before taking those pics and she wouldn’t be dealing with the embarrassment now. It is obvious that Ariane feels embarrassed for getting caught after Eva Marie confronts her on it in front of everyone. She knows it was a bad thing to do-it is obvious in her face.

Eva Marie gets a hotel room because she cannot stand to be in the bus with Ariane anymore. Eva Marie calls her husband for support, and Summer comes in to check on her. At the arena, Naomi confronts Ariane as well, telling her she was wrong for doing what she did to Eva Marie. When Ariane tries to deny that she was being malicious, Naomi calls her on it as well, and she admits it. Naomi reminds Ariane that her mugshots from a DUI are online as well. She tells Ariane that Eva Marie cried about the whole situation and finally Ariane starts to show remorse.

Eva Marie is still dealing with the aftershock of what Ariane did when she finds that all the guys have seen the pics too. Later Ariane apologizes to Eva Marie for sharing the pics. Eva Marie tells her it was a “bitch move” and she is now embarrassed. She tells Ariane she is not accepting her apology and walks away. Meet us here next week for all the details on the Total Divas!