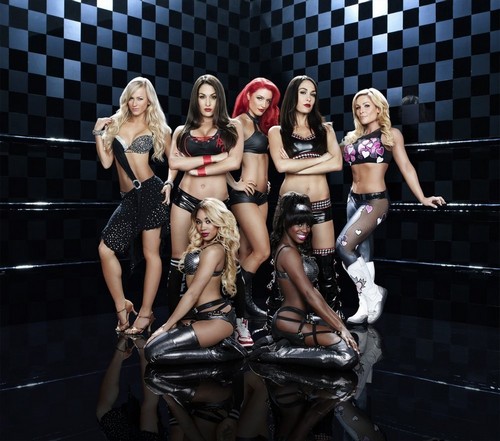 Tonight on E! TOTAL DIVAS continues with a whole new episode called, “Wedding Mania.” On this evening’s episode, Brie and Bryan get married; at the same time, Nikki’s secret marriage is exposed to John; and the Divas compete at WrestleMania.

On the last episode Eva Marie went to Mexico for Brie’s bachelorette part, but she ran into a problem when she struggled with her sobriety. Nikki got a little personal and revealed a secret from her past and Trinity ended up suffering by getting a serious eye injury.  Did you watch last week’s episode?  If you missed it we have a full and detailed recap, right here for you.

On tonight’s episode wedding bells are being heard, Brie and Brian are going to be getting married; as this is going on John finds out about Nicki’s secret marriage and the Divas compete at WrestleMania.

Tonight’s Season 2 Episode 10 of Total Diva’s is sure to be great, especially since we were left hanging by just about every cast member! Tune in at 9PM EST to E! We will also be recapping the episode right here for you! In the meantime, tell us your thoughts on season 2 so far.

RECAP: Ariane lets Vinnie inside of her room, but hides on him behind the bed; she jumps out and surprises him. She is so happy to have her boyfriend come to Wrestlemania. Eva says it’s so nice to sit down and relax for once; they usually are working so hard. Nattie spills Brianna’s secret about being married once before to a whole group of people, Trinity believes that it was something she probably shouldn’t have spread. Eva is walking with Jonathon her husband and she is going for her first signing, she is so nervous and is so happy to be part of the WWE; she knows the fans are die hard and is secretly freaking out. Eva gets some comments that hurt pretty badly about not being able to wrestle, she says it’s hard to not let it get to you sometimes because we’re all human. Nattie is hosting for the first time ever; she interviews a bunch of the wrestlers. At the party Trinity comes over and gets a drink for Cameron; Trinity says that in like two more years Vinnie and Cameron could get married. Trinity says she has never heard Ariane say she loves Vinnie, Trinity feels like it’s something you need to say if you’ve been in a relationship for almost two years.

At dinner Ariane says I love you to her mother, Vinnie comments saying that she actually does say I love you; Cameron says it’s a big deal and a word she can only said to someone she wants to marry. Ariane starts crying and Vinnie says he’s sorry and didn’t mean to make her cry; Ariane mentions that it’s hard for herself to say she loves people because of what she’s gone through in her life. Vinnie says he loves her and it’s okay, he will keep on supporting her. Nikki and John go to a late dinner together, things are very quiet; Nikki wonders if he’s tired or something. John asks Nikki if there is anything else going on, John mentions that it’s the most awkward dinner he’s been to; Nikki says she rarely sees John like this and wishes she could in some way make things better. The girls arrive to Wrestlemania, Brie has been waiting for this moment forever; she is so excited to be a part of this. Eva says she can’t believe it herself that she can be here right now, she is beyond excited and nervous. Summer mentions she got a gift for Brie even though she wasn’t invited to the wedding. Brie is told that her match has been put to 7th of the night instead of 3rd, she is afraid to get cut again this year like what happened last year.

Ariane and Trinity arrive, they find out how Brie’s match got pushed far back and that she may not even get to be a part of Wrestlemania. Eva is freaking out and feeling super nervous, she knows that it is soon getting to her match; she is starting to think she can’t do it. Nattie says that Eva should be nervous because it’s something super special and that she should be freaking out; she knows Eva cares about this all and that she should have the best time of her life and that she is proud of Eva.  Brie says that she is happy to perform but is in so much shock that Undertaker lost his 20+ win streak in Wrestlemania.

The divas now go out and have their own match, the girls have an amazing time and wished it never ended; the girls were so happy and are ready to celebrate Brie’s wedding.Brie is just so amazed that her wedding is so soon, Trinity says it’s so nice to be able to relax after Wrestlemania; Ariane says that she has food poisoning and feels horrible. Bri says it was so amazing be around her closes friends and families for one night, Joe says he thinks i’s time and wonders when John and Nikki will be getting married. Nikki hopes her secret doesn’t ruin it all, Vinnie comes to see Ariane who’s sick and he makes her feel so much better. The girls are in hair and make-up,  Jay comes in and mentions that John was super cool about Nikki being married before.

Nikki can’t believe he said anything, Brie then tells Nikki is the worst maid of honor for not actually telling John the secret; Nikki leaves and doesn’t look pleased.  Brie is so upset that she never told John, Jay says it’s Nikki’s fault for lying to him; Nikki says that this is a huge mess and can’t believe she has been lying this whole time and disappointed Brie. The wedding day has arrived and Brie is super nervous and can’t believe it came out of nowhere. Brie now walking down the aisle and will never forget the look on her husbands face, she believes the ceremony is so beautiful. Brie reads her vows first and Ariane says it made her reflect on her relationship to Vinnie. Bryan than reads his vows, mentioning that today is the most perfect day of his life and he is crying as he reads it. Brie and Bryan kiss, Brie is super happy; she is going to remember this for the rest of her life. Nikki says she is sick of this all and is going to tell him about it all; John lets her know it’s not the time or place.

Ariane take Vinni aside and tells him that she loves him and realizes how he’s so important to her; he’s always there for her no matter what and he’s also her best friend.

Brie felt the whole night could not be more perfect, Nikki decides to pull John aside and talk to him alone; Nikkia says she is super guilty about it all. John says that he wants to know how she feels because he doesn’t completely care, but it hurts how she can tell other people but not him; Nikki realizes she needs to have confidence in her relationship with John and is glad they made up. Brie feels so happy to have an amazing family and friends; she believes her wedding was the best.