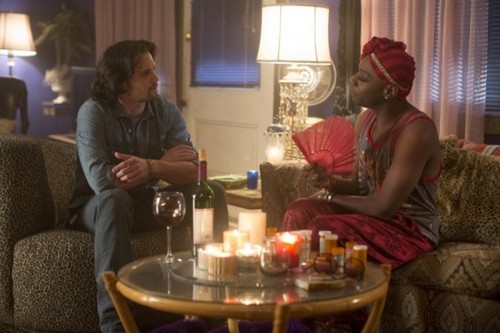 Tonight, TRUE BLOOD returns for its second episode of season 7 called “Fire In The Hole.” Tonight, Pam tries to motivate Eric to return to Louisiana; Sookie comes up with a risky plan; Jason mulls a future with Violet; Willa is forced to relocate; Sarah Newlin puts her past behind her.

On the last episode, a trio of hostages taken in by the Bellefleur’s attack looked to a familiar face as a possible liberator from the H-vamps. Sookie and Jason (Ryan Kwanten) visited the neighboring town of Saint Alice, where a young woman’s diary offered clues to the potential fate of Bon Temps. Spurned by Lafayette (Nelsan Ellis), a desperate Lettie Mae (Adina Porter) turns to Willa (Amelia Rose Blaire) to channel her family past. Vince whipped his fellow vigilantes into a dangerous frenzy. Pam’s (Kristin Bauer van Straten) search for her maker leads her to a very familiar place. Did you watch the last episode? If you missed it we have a full and detailed recap, right here for your enjoyment.

On tonight’s show, Sookie (Anna Paquin) hatches a dangerous plan to take down the H-Vamps, even as Vince (Brett Rickaby) and his armed vigilantes pose an equally serious threat. Lafayette (Nelsan Ellis) gets high with James (Nathan Parsons); Jason (Ryan Kwanten) eyes a family future with Violet (Karolina Wydra); Willa (Amelia Rose Blaire) is forced to find a new place to stay; Sarah Newlin (Anna Camp) sheds her past. Pam (Kristin Bauer van Straten) offers Eric (Alexander Skarsgrd) a compelling reason to return to Louisiana – and be the vampire he used to be.

Tonight’s new episode is going to be a bloody exciting one, which you won’t want to miss. So be sure to tune in for our live coverage of HBO’s True Blood’s third episode of season 7 called “Fire In The Hole,” tonight at 9PM EST! Remember also to bookmark Celeb Dirty Laundry and check back here for our live True Blood recaps, reviews, news, and spoilers! In the meantime, check out a sneak peek of tonight’s episode below.

Tonight’s show opens at a Yoga class with Sarah Newlin taking a class.  Pam asks Eric how long has he been sick.  Eric saw the first signs last month when he was in St. Petersburg.  Eric wonders why she followed him and congratulates her on outwitting him.  Pam lets him know that Tara is dead, Pam is upset.

Pam gives Eric hell for giving up.  Eric is depressed because he has lost so many people.  Eric has a flashbacks from France in 1986, where he is speaking to Sylvie.   Eric and Sylvie start to have sex they are interrupted making love by a member of The Authority, Nan because he has not registered and is not following the rules.  Eric and Pam are called into the Authority and are told about True Blood and about toeing the line.

Eric told Nan Flanagan from the Authority to F off, Pam is not pleased because Nan is from the authority and Pam thinks it is not a good move to not listen.

Meanwhile over at Sookie’s Alcide comes downstairs and looks for Sookie but she is gone.  Alcide runs out of the house and goes to Bill’s house and breaks down the door.  Meanwhile Sookie and Bill are driving away.  Sookie wants to know why Bill cannot feel her anymore.  Bill explain it is because his blood was drained when he fed the vampires.

Bill and Sookie have a plan and Bill explains to Sookie she will have to take his blood if their plan is going to work.

Andy’s daughter Adilyn and Wade are locked in jail and talking.  Wade is frightened.  Andy and Jessica come and let them out of jail and Adilyn and Wade tell them that town people came and took the guns.

Sam talks to the Reverend he is upset.  As they are speaking Willa runs in and she tells the Reverend that she gave Tara’s mother more blood.  Matt and Sam are driving and they come upon the group of town people with guns who tell Sam that they are taking their town back.  One of the members of the gang shoots Matt (vampire) and kills him.  The townspeople know that Sam is a shapeshifter and demand he leave town.

Jason asks Violet if they get free of this situation would she consider having a baby with him.

Andy, Jessica, Adilyn and Wade come to Jason’s house, Violet is not pleased they are interupted  Jessica tells Jason that the people who took the guns maybe after Sookie.  Jason goes to get his gun, no one is hurting his sister.

Lafayette is rocking out to some music, gotta love him.  James comes to the door he wants weed but Lafayette tells him they finished it all the previous night.  Lafayette offers him pills… James tells him he cannot swallow pills.  Lafayette starts to pop tons of pills and tells James he can drink his blood once he gets enough pills in his system.

Arlene and Holly are still locked in the dungeon.

Sookie is setting herself up as bait, does not want anyone else to die because of her.  Bill asks Sookie if she loves Alcide.  Sookie tells him to mind his business.  Later she owns up that she loves Alcide but he wants kids.  Sookie is upset because she feels Alcide loves her more than she loves him.

Meanwhile Jessica, Jason, Violet and Andy are driving to find Sookie.  Andy tells them they have trouble, they come upon the abandoned car that Sam and Matt were driving.

The gang of townspeople with guns comes upon them and starts threatening Jason and gang.. Jason threatens back but Maxine says F that and shoots Jessica.  Violet rushes her and pulls her heart out.  The rest of the gang runs away.  Andy tells Violet to go and get Rocky.  Jessica is confused that she is not healing from the wound.

Sookie is impatient because no one has come.  Bill has a flashback to when he went to war and his family taking a photo so he can take it to war to remember them by.  Sookie screams to try to get the Hep-V vampires or someone to come.

In another flashback Eric and Sylvie are having sex and they are interrupted by a group of men who have Pam.   One of the men take Sylvie and tells Eric he is from the Yakumo corporation.  Eric apologizes and says he will behave from now one.  The man tells Eric he has to choose one person to die, Pam or Sylvie.  Eric requests they kill him.  The man tells Eric The Authority wants him alive.  Eric tells them Pam lives.  They kill Sylvie.

Back to current time Pam asks Eric if he contracted the virus on purpose. Pam tells him he cannot give up, she begs him not to give up.  Eric tells Pam she is free to leave.

Eric has lost his taste for life and asks Pam to leave.  Pam tells Eric that Jason let Sarah Newlin live.  Eric is not pleased.  Eric gets up and tells Pam that they are going to go and find Sarah Newlin.

Meanwhile, Sarah Newlin and the yoga guru are in bed making out.  When they are finished Sarah goes to get a bottle of wine in the wine cellar and once she leaves in walks a man from the Yakumo corporation and they are looking for Sarah Newlin.  The Guru won’t tell tell them and they decapitate him.

Meanwhile Sookie is still waiting and Holly shows up and then the Hep-V vampires attack Bill.. Alcide shows up, Andy and Jason to save the day.  Alcide is upset Sookie is covered in blood.  Violet takes her to the river to clean up and Alcide tells Bill off.  All of a sudden shots ring out and Alcide is shot.  Sookie runs over to his body.  Jessica and Rocky offer to turn him, but Sookie turns them down.  Sookie cries over Alcide’s dead body.