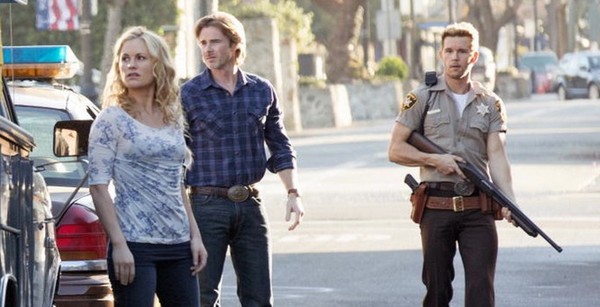 Tonight, TRUE BLOOD returns for its second episode of season 7 called “I Found You.” Tonight, Sookie spearheads a mission to a nearby town to find out what the future holds for Bon Temps. Meanwhile, hostages taken during the H-vamps’ attack on Bellefleur’s hope a familiar face can lead them to freedom; Lettie Mae desperately tries to channel her family’s past; and Vince stirs up a posse to seek justice on their own terms.

On the last episode, a band of rogue H-vamps crashed the vampire-human mixer at Bellefleur’s — with shocking results. As Sookie (Anna Paquin) sought refuge from accusations that she was somehow to blame for the chaos in Bon Temps, the “one vampire for every human” plan moved forward. In the face of a vigilante insurrection led by redneck Vince (Brett Rickaby), Bill (Stephen Moyer) receives aid from an unexpected source. Did you watch the last episode? If you missed it we have a full and detailed recap, right here for you enjoyment.

On tonight’s show, a trio of hostages taken in the Bellefleur’s attack looks to a familiar face as a possible liberator from the H-vamps. Sookie and Jason (Ryan Kwanten) visit the neighboring town of Saint Alice, where a young woman’s diary offers clues to the potential fate of Bon Temps. Spurned by Lafayette (Nelsan Ellis), a desperate Lettie Mae (Adina Porter) turns to Willa (Amelia Rose Blaire) to channel her family past. Vince whips his fellow vigilantes into a dangerous frenzy. Pam’s (Kristin Bauer van Straten) search for her maker leads her to a very familiar place.

Tonight’s new episode is going to be a bloody exciting one, which you won’t want to miss. So be sure to tune in for our live coverage of HBO’s True Blood’s second episode of season 7 called “I Found You,” tonight at 9PM EST! Remember also to bookmark Celeb Dirty Laundry and check back here for our live True Blood recaps, reviews, news, and spoilers! In the meantime, check out a sneak peek of tonight’s episode below.

The show begins with someone stalking stalking Eric Northman. It’s Jason Stalkhouse. Eric is in an old mansion and he’s looking out a window. Eric says, “You found me.” Jason says, “Well, you didn’t make it easy.”

Jason is obviously having a dream — and this one grows quite intense. Jason jumps on Eric’s back and they end up on the bed. Eric and Jason share passionate kisses. Eric kisses Jason’s chests; however, before things go much farther, Jason wakes up in the church.

Sookie is standing outside the church. Everyone is busy and talking about how awful the H-Vamp situation is. Andy is still leading the search for Arlene and Holly. Sookie suggests they go look at the body she found last episode; she didn’t recognize the girl, so she thinks that the vamps must’ve brought her with them from wherever they were last.

Tara’s mother says that she’s going to go check up on Lafayette.

Meanwhile, the H-Vamps are holed up in Fangtasia. One of the H-Vamps went crazy and ate too many of the people, so the leader makes Betty — who was once a school teacher — the new Reaper (aka “Gatherer of Food”). Betty goes down into the dungeons to pick a new person for dinner. Her gaze lands on Arlene, but she quickly looks away and chooses another poor soul to take back upstairs. Arlene tells Holly that she recognized that vampire; she tells Holly that that was their children’s school teacher. Arlene thinks that, somehow, Betty will be their way out.

Meanwhile, Sookie, Jason, Andy, and Alcide find the body. Jason locates the wallet and they identify the woman as Mary — she was from two towns over: Saint Alice.

Tara’s mother shows up to talk to Lafayette. She says she’s checking in on him. She goes crazy and wants to reconnect with Tara’s spirit. She wants some vampire blood so she can see her daughter again; however, Lafayette denies her request.

Vince comes storming into the bar and is trying to rally the townsfolk against Mayor Merlotte. He’s somewhat successful and all the townsfolk begin breaking broomsticks and chairs to form stakes — to go after the vampires themselves. Adilyn, who is a fairy and can read minds (much like Sookie can), catches a woman’s thought who knows where guns are. Adilyn takes one of Holly’s sons (the one she’s crushing on) with her and they run away from the chaos.

Meanwhile, Arlene sort of convinces Betty to help them escape. Betty says, after being persuaded, that she’ll think of something.

Adilyn shows up at the jail to warn Kenya that there’s an angry horde coming for the guns. Kenya is about to help them, but when the angry mob shows up, one of the women persuades her to hand over the guns. They lock up Holly’s son and Adilyn — who tried to protect herself with her fairy light.

Jessica senses Adilyn’s stress; however, it’s daytime so she can’t do anything about it.

The gang in Saint Alice find the house of the dead girl; everyone’s very emotional.

Meanwhile, Tara’s mother accidentally burns her hand on a cast iron skillet. She really wants vampire blood — so she gets an idea. She willingly sticks her hand in the pan and then seeks out Willa for some blood. Willa, at first, tells her that she needs to go to the hospital — but then she caves and willingly gives her some blood. She immediately has a hallucination of Tara, who’s hanging on a cross and entangled in a giant boa constrictor.

Betty asks the H-Vamp leader if she can be Sleep Monitor. She’s granted this position. She wanted this position so she could go save all the captives while the other H-Vamps slept. When she goes down to save them, she says that she needs to feed on someone quickly — before they make the escape. As she’s feeding on Arlene, she dies — explodes into a puddle of vamp goo. Clearly, the Hep-V has finally killed her. A gruesome death.

Andy returns home to find Jessica in the attic. Jessica says that Adilyn is in trouble and that they need to go look for her once the sun sets.

Sookie and Alcide return home; he goes up to take a shower. While he’s in the shower, Sookie runs over to Bill’s house and asks him if he’d be able to feel her fear if she was in any trouble.

There, she finds Eric.