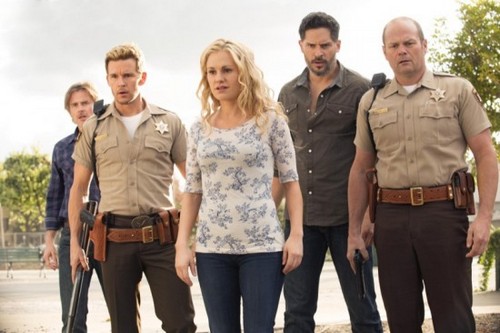 Waiting sure has sucked!  But, finally, tonight is the season 7 premiere of TRUE BLOOD. Tonight’s episode is called “Jesus Gonna Be Here” and on tonight’s episode, the seventh season begins with the vampire-human mixer at Bellefleur’s in full swing.  However, a gruesome attack by a band of H-vamps throws Bon Temps into chaos and prompts a wave of spiteful finger-pointing at one of its most well-known residents. Meanwhile, Jessica tries to atone for her past mistakes; Bill has an unlikely ally in a showdown with vigilantes; and Pam seeks answers to a mystery in Morocco.

On the last episode, the week before the final season of True Blood premiered, HBO aired “Farewell to Bon Temps”, a 30-minute special in which the cast sat down and talked about their memories from the last seven seasons. Did you watch the special season 7 preview episode? If not, check it out here before you check out the premiere of season 7.

On tonight’s show, a band of rogue H-vamps crashes the vampire-human mixer at Bellefleur’s — with shocking results. As Sookie (Anna Paquin) seeks refuge from accusations that she’s somehow to blame for the chaos in Bon Temps, the “one vampire for every human” plan moves forward. In the face of a vigilante insurrection led by redneck Vince (Brett Rickaby), Bill (Stephen Moyer) receives aid from an unexpected source.

Tonight’s season 7 premiere episode is going to be a bloody exciting one, which you won’t want to miss. So be sure to tune in for our live coverage of HBO’s True Blood season premiere “Jesus Gonna Be Here,” tonight at 9PM EST! Remember also to bookmark Celeb Dirty Laundry and check back here for our live True Blood recaps, reviews, news, and spoilers! In the meantime, check out a sneak peek of tonight’s episode below.

The show opens with a giant brawl between vampires, werewolves, and humans. Sam is trying to save people from the sick vampires, and Tara’s mom is freaking out, asking The Lord to protect her from the evil beings.

Eventually, the raucous dies down. Bill arrives. Sookie is looking at the aftermath — the dead bodies and all the gore. Jason refers to the crazy vampires as Hep-Vs.

Sookie, Lafayette, Bill, and Jason walk over to Tara’s mom, who’s crying over a puddle of vampire guts. She cries, “They killed my baby girl. They killed Tara.”

Jason gets on the phone with Andy. Jason tells Andy that it’s a bloodbath over there. Andy leaves and tells his only surviving daughter to stay inside. Jessica shows up on the deck before Andy leaves. Andy tells his daughter not to invite Jessica in.

Everyone is gathering at the bar, trying to recover after the attack. Arlene and Holly have been kidnapped.

Sookie leaves, as she can’t handle the telepathic voices.

A man named Vince comes over and calls Sam out on his shifting abilities; he saw him change into a dog.

Bill says he needs all the humans to go home and, if they’re Hep-V negative, to feed their vampire protectors.

Sookie is walking by herself through the woods. Her phone rings; it’s Alcide. She doesn’t answer the phone. Instead, she throws the phone into the bushes — because of course she’d do a thing like that.

Meanwhile, Pam is in a Moroccan club/bar. She’s playing a game of Russian Roulette with a man. They point the gun at their hearts. Pam goes on about how she has no faith any longer, as everyone she’s ever loved has either left or died. The man says that she is hollow and goes on about how he will survive — but then he shoots the gun and explodes.

Pam is searching for her Maker, Eric. After winning the game of Russian Roulette, the man tells her of a man who might know where Eric is — or what happened to him.

Meanwhile, back in Louisiana, Andy’s daughter, Adylin, talks with Jessica. She opens the window and converses with her from the porch.

Adylin asks Jessica if she thinks that she still smells good — because of her blood. She asks Jessica about her boyfriend. Adelaide says that she has a crush on Wade, Holly’s boy.

A vampire approaches the yard and asks, “What is she?” Jessica rushes out to the lawn and says, “She’s mine!”

At home, Sookie is drinking. Alcide barges in, angry that Sookie walked home alone. She says that it’s her curse to know the truth ALL THE TIME because of her abilities. She’s still sad that Tara’s dead, and Sookie apologizes for being so distant, but she admits she’d like to be alone at the moment. Alcide agrees and leaves her be.

Jason is driving in the car with Violet. They run into Vince, the man who ran for mayor against Sam. He and a gang of people are trying to take matters into their own hands.

Jessica’s boyfriend, James, is Lafayette’s vampire protector. They arrive at Lafayette’s house. They smoke some stuff, to “get altered,” and James tells L some stories. He tells him about his vampire creation story and then Lafayette allows him to feed from his wrist.

The vampire is trying to get Adylin. Jessica tells A to drink some of her blood — if she does, she’ll always know where she is and will always be able to find her.

Meanwhile, Tara’s mom is hallucinating after drinking so much vampire blood. She thinks she sees Tara.

Pam finds a man named Najat. She gives him a wad of money. The man offers to let Pam feed on his daughter, as children blood is the only clean blood here. Najat hands Pam a map. She says, “He would never.” But the man says, “My information is accurate.” He says what she’s to do with the information is up to her.

Meanwhile, Sookie crawls into bed with Alcide. She apologizes.

Bill and Andy arrive at an old warehouse. Bill says that the sick vampires have been nesting here. Andy shouts Holly’s name into the dark warehouse, but it seems as if nobody is there.

Vince and his gang arrive at the warehouse, which is littered with dead humans hanging from the ceiling.

Meanwhile, we see Holly and Arlene being held in what looks like the dungeons of Fangtasia.

Morning is approaching and Adylin, not wanting Jessica to die, invites her inside. The vampire who was stalking the house burns.