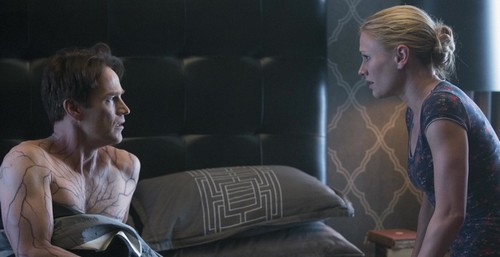 Tonight, TRUE BLOOD returns for its eighth episode of season 7 called “Almost Home.” On tonight’s episode, Eric mulls his options in his quest to eliminate Sarah Newlin; Sookie puts her life on the line for Bill; Reverend Daniels is pressured by Lettie Mae and Lafayette to join their search for Tara; Violet has revenge on her mind.

On the last episode, Eric (Alexander Skarsgard), Pam (Kristin Bauer van Straten) and Mr. Gus (Will Yun Lee) closed in on Sarah (Anna Camp) in Dallas. Adilyn (Bailey Noble) and Wade (Noah Matthews) found a temporary haven, and unexpected hospitality. Refusing to accept the inevitable, a desperate Sookie (Anna Paquin) turned to unexpected resources in search of a miracle. Bill (Stephen Moyer) recalled the inexorable forces that led him to his marriage 170 years earlier. A familiar face resurfaced in Bon Temps. Sam (Sam Trammell) faced a quandary. Did you watch the last episode? If you missed it, then we have a full and detailed recap, right here for your enjoyment.

On tonight’s show, with his prey in sight, Eric reconsiders his end-game strategies against Sarah. Sookie puts her life at risk in hopes of saving Bill. Lettie Mae (Adina Porter) and Lafayette (Nelsan Ellis) urge Reverend Daniels (Gregg Daniel) to join them in their V-fueled search for Tara (Rutina Wesley). Violet (Karolina Wydra) eyes payback against those who betrayed her, while an old love is reborn for others.

Tonight’s new episode is going to be a bloody exciting one and you’re not going to want to miss it. So be sure to tune in for our live coverage of HBO’s True Blood’s eighth episode of season 7 called “Almost Home” tonight at 9PM EST! Remember to also bookmark Celeb Dirty Laundry and check back here for our live True Blood recaps, reviews, news, and spoilers! In the meantime, check out a sneak peek of tonight’s episode below.

Yakonoma Corp, Pam, and Eric descend upon Sarah Newlin. Eric grabs her by the throat and, for a brief second, considers killing her. The Yakuza draw their guns. Pam tells Eric not to do anything irrational and grabs a gun and threatens to kill herself. “If you die, then I die,” she says. Eric finds his wits. Instead of killing her, he feeds on Sarah. With her blood now in his system, he’s been cured of Hep-V.

Meanwhile, Bill and Sookie talk in bed after their night of rekindled passion. Sookie asks Bill questions, thinking that he doesn’t have much longer (he doesn’t, unless he gets the cure). He reveals that Sophie-Anne wanted him to collect Sookie because she was fae, and then he says that she wanted to breed her to make more fae offspring. They talk about their epic love they shared.

Lafayette and Lettie Mae dig up some family’s yard in an effort to locate something that they think Tara is trying to “show” them. The Reverend comes by and apologizes to the family. Lafayette ensures him that they’re not high and that Tara is desperate to lead them to something. James eventually shows up. The Reverend thinks that this must be their “supply.” Lettie asks the Reverend to “come with them” on their V trip, telling him that sometimes you have to take a journey, “even if it’s a blind one.”

James gives his blood to Lafayette, then to Lettie Mae, and then finally to the Reverend. They all reunite in the vision world and see Tara. They follow her into the family’s house. The family looks at them like they’re crazy.

There’s a flashback to a time when Tara, Lafayette, and Sookie were little. It’s Tara’s birthday party. Tara’s dad comes home and is furious that Lettie has thrown a birthday party with “his money.” He gets abusive.

Bridget and Hoyt and Jason are going through Hoyt’s Mama’s belongings when he receives a text from Violet. She informs him that she has Wade and Adilyn. Jason immediately leaves and calls Andy. Andy and Holly, however, are far away. They’re still at the lake house, so Andy tells Jason to handle things and get things under control. Bridget, mad at Hoyt for taking his emotions out on her, follows Jason — even though Jason tells her that coming with him is an extremely bad (and dangerous) idea.

In Fangtasia, Mr. Yakonoma reveals that Sarah’s blood has been successfully synthesized. Pam wonders why then it’s taking so long for them to get their money and for the cures to be distributed. He tells Eric and Pam that they don’t want it perfect. They want it to be a “healthy habit,” not a cure, to ensure maximum and continuous profit.

Jason arrives at Violet’s mansion. Before getting out of the car, Jason gives Violet a gun to protect herself.

He goes into Violet’s house. Creepy music is playing, which makes her already creepy mansion even creepier. His gun is drawn and he steps through the house looking for crazy Violet. Remember, the only reason she’s acting out like this is because she’s mad at Jason for getting back with Jessica. She thinks he betrayed her.

Violet sneaks up on him. She says that nobody has ever betrayed her, that she has brought some of the most powerful men in history down to their knees. She says, once she’s allowed someone inside (and close to her) nobody has ever wanted out. Next, she locks Jason up in a room beside Adilyn, Wade, and Jessica. She goes on and on about how she’ll torture each and every one of them. After she finishes her little speech about how all she wanted was for Jason to worship her, someone shoots her in the heart.

Hoyt comes in and saves the day.

Jessica is stunned to see Hoyt — as well as his girlfriend, Bridget.

Meanwhile, Tara, the Reverend, Lafayette, and Lettie Mae experience the vision/flashback of Tara’s dad abusing Lettie. We see Young Tara with her dad’s gun. She points it at him (though he doesn’t see her because he’s too busy). She thinks about pulling the trigger; however, she doesn’t, and runs out to the yard to bury it in the ground. This is what Tara was trying to show them.

They venture out to the yard and see Adult Tara, in a white dress, standing there. She says, “I’m sorry. I shoulda pulled that trigger long before that day.”

They have a touching moment together, and Tara eventually tells her mother to forgive herself and to let her go. Tara wants her to promise, promise that she’ll move on and stop living a life filled with guilt and regret, despite the unfortunate life she’s led.

Tara walks off into the night (towards the light).

Bridget finds Jason and asks him if Jessica is his girlfriend. Jason says that he’s not really sure what’s between them.

Eric shows up at Bill’s house. He tells Sookie that he’s all right. Sookie asks how he got cured. She wants the cure for Bill. Eric isn’t sure what to do, as the cure isn’t “ready” yet, so he tells Sookie to sit tight and that he’ll return tomorrow night — hopefully with an answer.

Sookie runs off into the night.

The next morning, she shows up Fangtasia to speak with Eric. The Yakuza have their guns out and are getting a bit rambunctious. Eric tells Mr. Y that Sookie was just another “fang banger.” Eric says that he’ll glamour her to get her to leave them alone. (Of course, Sookie is immune to glamouring, but Mr. Y doesn’t know this).

Hoyt shows up for breakfast and meets with Jason. Hoyt says that he loves Bridget but that there’s something about Jessica that he just can’t shake.

Sookie drives away from Fangtasia; however, she can’t quiet one of Mr. Y’s thoughts, which basically revealed that they are keeping something extremely precious in the dungeon of Fangtasia.

So . . . Sookie being Sookie . . . turns the truck around and heads back to the vampire club.

Hoyt visits Jessica and brings Bill a bag of fresh, Hep-V negative blood (Jason told him all about Jessica’s situation).

Sookie finds the secret passageway into the Fangtasia dungeon. She finds Sarah there. She discovers that Sarah is the cure; however, she doesn’t remove her from the dungeon.

Later, she takes Bill to Sarah. Bill and Pam are also trying to save Bill . . . however, they run in to each other in the dungeon before they can deliver the blood to Bill. Eric is angered by the fact that Sookie didn’t wait for him — or trust that he would help his friends. Eric tells Bill to drink from Sarah.